A unified Iraq, an independent Kurdistan? 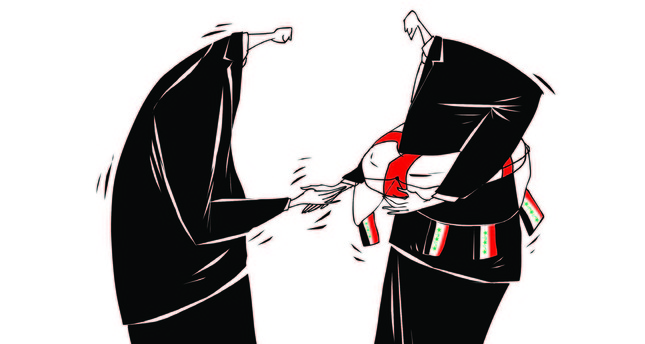 Iraq looks likely to break up, decentralize or perhaps descend into anarchy. In such a scenario Iraq would descend into a vortex of endless chaotic violence, whether driven by crude blood-thirsty sectarianism or by the ambition to establish an Arab Caliphate. In such circumstances Ankara might readily accommodate itself even to a fully independent state of Kurdistan in Iraq

The June 26 Turkish National Security Council's (NSC) declaration of continued "support for the Iraqi people and for the protection of the country's territorial integrity and political unity" no doubt accurately reflects Ankara's preference in an ideal world. However, what if this unfolding drama in neighboring Iraq leads us to conclude that there is no such thing as "Iraqi people," and demonstrates the impossibility of political unity? Iraq's current realities look likely to push Turkey and other interested parties toward an accommodation with least attractive rather than most desirable outcomes. This line of thought presumably helps explain the comment by AK Party Spokesman Hüseyin Çelik that, in the event of Iraq's break-up, "the Kurds, like any other nation, will have the right to decide their fate." He also pledged Turkey's continuing support to the Kurdistan Regional Government (KRG). Ankara gave up on Prime Minister Nouri al-Maliki's government long ago, while its relationship with Irbil is the best it has in the region. However, some would argue that the more the Kurds seek to maximize their autonomy the less likely it is that Iraq will hold together and that, furthermore, Turkey's support for the KRG makes Kurdish intransigence more likely. The coming weeks, months and years will test the truth of these propositions, and along the way could test the very nature of Ankara's commitment to its relationship to Irbil.

In the very short term, the Kurdish issue does not appear to be Iraq's most pressing threat to Iraq's integrity. This Sunni Arab uprising in Iraq – for that is what we are witnessing, not a crusade by a small bunch of lightly armed, fanatical and often foreign insurgents – has laid bare the consequences of Maliki's corrupt, deeply sectarian and personalized approach to running the country. Both Washington and Tehran bear considerable responsibility for acquiescing to, and even supporting, Maliki's repression and marginalization of Iraq's Sunni Arabs. Both now seem prepared to countenance Maliki's removal or demotion as a precondition for the formation of a government of national unity. Even so, the prospects do not look good. Maliki looks likely to resist his displacement, regardless of Washington and Tehran's wishes. Many groups are contributing to the current revolt against Baghdad in northern and western Iraq including tribal leaders, Naqshibandi groups, ex-Baathist and the like. Most want to see an end to Shia triumphalism in Baghdad rather than the establishment of a global caliphate. This is a fight between a Shia faction that has taken control of the instruments of the state and its Sunni opponents. It is not a fight between a properly-constituted government on the one hand and terrorists on the other. Sunni politicians, who in any case are hopelessly fragmented and discredited, will not want to be caught on the wrong side in a sectarian fight. Or is the formation of a coalition government itself intended to bring the fighting to a halt? The Sunni-Shia sectarian divide in Iraq might now be too great to heal.

A key Turkish interest, certainly in the immediate term, is in a secure and ordered Iraqi Kurdistan. The KRG is currently experiencing a severe financial crisis. For months Baghdad has been withholding Irbil's 17 percent share of the national budget, which has seen public sector salaries in the KRG go unpaid. The Kurds are also now burdened with the responsibility for the humanitarian care of thousands of Iraqis fleeing Mosul and other troubled parts of northern Iraq, in addition to the many thousands of mainly ethnic Kurds that have fled the fighting in Syria. Furthermore, as a consequence of the battle over the Baiji oil refinery further south, and the diversion of oil to Kirkuk, there is a profound shortage of fuel in the KRG, resulting in petrol shortages and massive queues at the pumps. In response to these short-term pressures, Ankara is standing by its ally in Northern Iraq. It has extended a financial lifeline to Irbil and has worked to make up for the shortfall in fuel.

More importantly, Ankara and Irbil have also deepened their energy partnership. Both Washington and Baghdad have regarded the KRG's oil exports as not only illegal but also a step on the road to Kurdish separation from Iraq. Yet, as the Iraqi crisis has deepened, Ankara has facilitated these exports regardless, and the fourth tanker carrying Kurdish oil is set to depart from the Turkish port of Ceyhan. Furthermore, Turkey has announced that it intends to continue to enable the transit and sale of Kurdish oil, and even signed a 50-year oil export agreement with Irbil. Ankara has committed to holding funds in a Turkish bank until a comprehensive agreement between Baghdad and Irbil emerges. Such an agreement does not look at all imminent. With Arab Iraq in chaos and with Baghdad weakened, opposition to Ankara's support for the KRG's position on oil sales is in any case sure to soften. However, things are not so simple. Recent developments have introduced additional complications into the Ankara-Irbil relationship, and the coming days, weeks, months and even years will provide a demanding test of the extent to which Turkey and the KRG have truly established what leaders on both sides like to call a "strategic" partnership.

For years, the principle that Kirkuk should not fall into Kurdish hands was the most deeply red of Ankara's red lines. Now, the Kurdish peshmerga have taken over Kirkuk and other disputed territories in the wake of the Iraqi army's flight from ISIS's forces. This expands by about 40 percent the territory under Irbil's control, gives them access to the rich oilfields of Kirkuk and thus the very real possibility of eventual economic independence from Baghdad. Some had initially thought that this "land grab" put the Kurds in a better bargaining position to insist on the implementation of Article 140 of Iraq's 2005 Constitution, which calls for a census and referendum on Kirkuk's future, and which is associated with a return of Kurds (and Turkmen) to Kirkuk and at least some reversal of Saddam's past Arabization of the area. However, KRG President Massoud Barzani is talking as if the territorial issue has been resolved, and he has ordered the reinforcement of the peshmerga contingent in Kirkuk.

Ankara's response has thus far been muted, and in some form or another Kirkuk is highly likely to remain in Kurdish hands. If the situation stabilizes, Kurdish authorities will be able to restore the Kirkuk oilfields and export ever-growing and substantial quantities of oil via the Turkish port of Ceyhan. This would be to Turkey's advantage. But the psychological resistance to a "greater Kurdistan" in Iraq, particularly should it meet with resistance from local Turkmen or Arabs or from a unity government in Baghdad, might be difficult for Ankara to overcome. Furthermore, the Kurds have now secured territory with substantial Arab, Turkmen and Christian populations. Iraqi Turkmen Front (ITF) leaders have been expressing their opposition to the Kurdish takeover, and their concerns are echoed in some quarters in Ankara. Foreign Minister Ahmet Davutoğlu has sought to reassure Iraq's Turkmen, who are neither as numerous nor as pro-Turkey as Ankara has in the past sometimes wished them to be. But Ankara's stance could easily be interpreted as desertion of Iraq's Turkmen. The fate of the Turkmen undoubtedly introduces a sensitivity to the Ankara-Irbil relationship. Will Turkey continue to acquiesce in this Kurdish "land grab" should it emerge as an obstacle to the formation of a government of national unity, or as a cause of persisting local violence?

The KRG now shares its Iraqi borders with territory under the control of ISIS or other Sunni militant groups. Skirmishes between the peshmerga and Sunni militant forces, some of them quite fierce, are already breaking out, and will continue to do so. In part these fire fights are over territorial demarcation, which will surely continue to be disputed in the months to come. With the influx of displaced people into Kurdistan, and given the unpredictability of ISIS, these clashes could spread into KRG territory itself. Is the peshmerga able to protect its expanded borders and ensure security both within KRG territory and in the demographically mixed areas it has annexed? Ankara would not wish to see ISIS victories, and the coming months could see pressure mount on Ankara to provide assistance to an increasingly stretched Kurdish force. How would Turkey respond?

On balance, Iraq looks likely to break up, or at least decentralize, or perhaps descend into anarchy. In such a scenario, the strategic relationship between Ankara and Irbil looks irreversible. This bond would strengthen still further the more Iraq descends into a vortex of endless and chaotic violence, whether driven by a crude blood-thirsty sectarianism or by the ambition to establish an Arab caliphate that involves the eradication of the borders between Iraq, Syria, and perhaps Jordan and Lebanon too. Notwithstanding the NSC's statement, in such circumstances Ankara might readily accommodate itself even to a fully independent state of Kurdistan in Iraq.

But does Turkish support for Irbil rest on the assumption of a fragmented Iraq or of sectarian rule in Baghdad? What if the current trauma in Iraq produces a commitment in Baghdad to hold the country together, encouraged by both Washington and Tehran? And what if Irbil appears as an obstacle to that, by holding out for Baghdad's acquiescence in Irbil's unilateral resolution of Article 140, or by demanding complete energy independence as a precondition for participation in a government of national unity? The maintenance of Ankara's current stance might indeed then appear as support for greater Kurdish autonomy or even independence, and as designed to bring about Iraq's fragmentation. In short, is Ankara's commitment to Iraq's unity simply rhetorical? Or are there circumstances in which its support for Irbil could wither away?