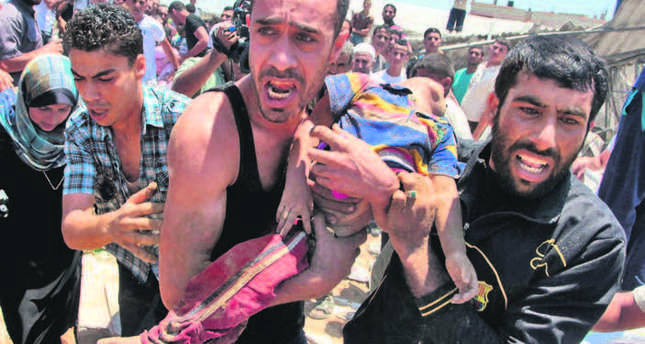 by Mahmoud Yamak
Jul 12, 2014 12:00 am
In the past week and a half, there have been over 500 Palestinians arrested, tens beaten and injured and at least nine killed in the Palestinian territories. This recent spree of violence was sparked by the kidnapping and subsequent murder of three Israeli settlers from Kfar Etzion. Until now, Israel has not presented a shred of evidence against the group it claims orchestrated the killings, namely Hamas.

Regardless, some social and academic circles have argued that both Israelis and Palestinians alike are at fault for what has occurred, and so must unilaterally cease such episodic violence. Unfortunately, this proposal is getting quite old for numerous and obvious reasons. First, the deaths of the Israeli settlers were not carried out by the Palestinian Authority's police force or by Hamas. Hamas has repeatedly and unequivocally denied any involvement in the murders. This was not a "state" sponsored crime. It was merely the result of a lone wolf (or wolves) acting at their own behest. The Palestinian leadership has absolutely nothing to gain from such incidents and in fact finds itself undercut. While some may point fingers at Hamas, we must ask ourselves why they would risk the stability of the unity government from which they have come to gain crucial political and economic leverage?

In retrospect, Israeli state security forces are murdering Palestinians. A recent CNN report by Ivan Watson goes into some detail regarding the use of live bullets by Israeli forces against unarmed Palestinian protesters. An analogous illustration would be something like a Crimean thug murdering a Russian teenager living on stolen Crimean land. As a result, Russian security forces respond with live bullets against Crimeans in their own neighborhoods — a numbing example of collective punishment, something Israel practices religiously.

Second, to quote the popular cliché, when confused, go back to where you started. Unfortunately, many so-called analysts of the ongoing conflict seem to forget the fact that there exists, in this political equation, an occupying force as well as those being occupied. To quote the Foundation for Middle East Peace's settlement report, "Israel is required by international law [per the Fourth Geneva Convention] to protect Palestinians under occupation." This means that Israel, as an occupying force, has the legal responsibility to protect the Palestinians and their children. A recent UN report stated that Israeli settler attacks on Palestinians have increased four-fold in the last eight years. These atrocious settler-based assaults did not start last week when the media finally decided to pick up the stories. To the contrary, settler violence against Palestinian natives has been persistent for decades.

With tensions already rising between Israelis and Palestinians, Prime Minister Netanyahu has resorted to aggressive rhetoric. Swearing to retaliate against "human animals," while simultaneously blaming Hamas for the killing, has given him carte blanche to strike wherever he pleases. This intention is made clear by the latest remarks of Israeli Lieutenant Colonel Peter Lerner where he unashamedly states, "Israel needs no proof to kill Palestinians." To argue that Netanyahu is merely a political figurehead whose continued incitement of hatred bears no connection to Israeli Defense Forces on the ground is simply untrue.

Lerner and the institution he represents, staying true to his remarks, have indiscriminately targeted Palestinians in the West Bank. The recent beating of 15-year old Palestinian-American Tareq Khdeir from Tampa, Florida, bears the hallmarks of the all-too-familiar Israeli treatment of Palestinian youth. Preceding this incident, Tareq Khdeir's cousin, 16-year-old Muhammad Khdeir, was kidnapped by Jewish extremists, and according to autopsy reports, burnt to death. Israeli raids on Palestinian homes, along with the recent airstrikes in Gaza, are a perfect display of the state's minimal restraint when it comes to targeting Palestinian children. This is in addition to Israeli settler violence, where numerous methods have been employed to target Palestinians. Recently, 9-year-old Sanabel Tus was hit by a settler's car and had her body dumped in a hole on the side of the road. She barely lived. Seth Freedman, former member of the Israeli Defense Forces, gave his personal account regarding settler and IDF collusion, "Every time I witness settlers assaulting and abusing Palestinians in the West Bank, soldiers are always on hand to provide armed cover for the attackers, refusing to intervene on the victims' behalf and revealing the true level of support the army continues to offer to the settler camp."

Unsurprisingly, Palestinians are becoming extremely worried about the rising violence they and their children are consistently met with. A recent column by Sayed Kashua, a prominent Hebrew novelist and playwright of Arab descent, published in Haaretz, epitomizes the growing fear amongst Palestinians due to rising settler violence and anti-Arab/Palestinian rhetoric. In it, he contemplates leaving his beloved Jerusalem permanently, alongside his children. In an environment where, according to Defense for Children International, as of May 2014, there are 214 Palestinian children in Israeli prisons, the situation is looking ever bleaker. Albeit late, it is refreshing to finally see some degree of media coverage of the plight of the Palestinian children, especially from networks like CNN. Nevertheless, more pressure needs to be placed on Israel by the international community, and Mahmoud Abbas needs to start seriously thinking about joining the International Criminal Court. It is safe to say that the Palestinians have had enough.