Reconciliation or division: Iraq between Skyes-Picot and Biden 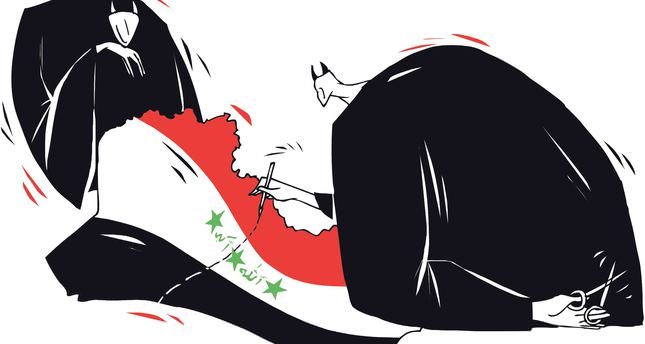 If Iraqi politicians manage to form a government of national unity to replace Maliki's, democratic forces will need to draw a two-pronged policy to address major obstacles in the way of peace and dislodge ISIS and other extremist militias from northern and central provinces. The success of this policy necessitates the cooperation of regional governments, especially Turkey, Saudi Arabia and Iran

Political observers and numerous statesmen have made statements to the effect that the fall of Mosul on June 10, 2014 to the Islamic State of Iraq and al-Sham (ISIS), signaled a new era in Iraq. The country is sliding toward a rapid disintegration and some have gone so far as to say that the recent events have sealed off the end of Iraq as a political entity.

Prime Minister Nouri al-Maliki's eight years of sectarian- based policies have the accumulative effects of marginalization and disenfranchisement of Sunnis in particular are to blame for exacerbating Iraq's sectarian violence and, subsequently, entrenching Iraq's centuries-old ethno-sectarian schisms as evidenced by ISIS's recent offensive, supported by Sunni tribes, in north-central and northern Iraq. The only way left for Shiites, Sunnis, and Kurds to co-exist peacefully is a loose federation scheme that was proposed in 2006 by then-Senator Joe Biden to partition Iraq into Sunni, Shiite and Kurdish states. When the scheme was announced, Arabs and Iraqis were outraged, and it was termed another Sykes-Picot Agreement - a Western design to divide Iraq. We maintain here that the ongoing Sunni uprising has opened a new chapter in Iraq's history that it will be either the end of Iraq, as a writer in the influential Time Magazine's June 20, 2014 issue argued, or the creation of a loose federal regime.

There is a probability that Iraq is going to face a destiny similar to that of the Socialist Federal Republic of Yugoslavia in the 1990s: a long, drawn-out and bloody civil war that led to the disintegration of the country into separate sectarian and ethnically based regimes.

The situation in Iraq is starting to resemble that in Yugoslavia in the early 1990s, though some people may disagree with this analogy. Pre-socialist Yugoslavia, an invention of European powers which was dictated by the Treaty of Versailles at the end of World War I, was very similar to Iraq. Iraq itself is a product of the Sykes-Picot Agreement that was also devised by Western powers in 1916 to arbitrarily create a multi-ethnic, multi-linguistic, and multi-religious/ sectarian regime. Forced together by European occupation forces following World War I, the ethnic, linguistic and national groups have never had any credible reason to believe that anything other than an authoritarian regime could or should bring them together and make them stay together. For eight decades Iraq was ruled by Sunni Arab elites. Other groups were marginalized and silenced by extreme violence.

Today, Maliki with the assistance of the U.S. and Iran has only reversed the situation in favor of Shiites. In the former Yugoslavia, as in Iraq, ethnic groups have clashed over the years, but they also have had long periods of peaceful coexistence - and not only under the heavy hand of a Tito. Croatians, Bosnians, Slovenians, Kosovars, Macedonians, Montenegrins and Serbs lived together for centuries under the relatively benign Ottoman and Habsburg empires and later under their own monarchy. So did Kurds, Shiites and Sunnis in Mesopotamia. In both cases, intermarriage rates were high, and there was no popular clamor for civil war. In more recent times, domestic strife has been fomented by megalomaniacs such as Slobodan Milosevic, Saddam Hussein, and Maliki who sought to profit from violence. As these groups committed atrocities, they fed demands for vengeance, leading to more death.

A partitioning of Iraq would be a very bad thing as it could be as bloody as the breakup of Yugoslavia, or maybe worse. Civil war and the breakup of Iraq may have farreaching devastating spillover for Iraq's neighbors, Turkey in particular. If the wheels of division were to come into motion, Sunni, Shiite and Kurdish forces would scramble to seize control of mixed and disputed territories which would create circumstances conducive for ethnic cleansing in mixed cities like Baghdad, Kirkuk, Diyala, Babil and Mosul.

The entrance of Kurdish forces into Kirkuk and the fall of Talafar, a Turkmen town, created a lot of anxiety in Turkey and there were voices asking for intervention. Similarly, the threat by ISIS to march on Baghdad and Karbala forced even the timid Ayatollah Ali al-Sistani to decree a fatwa for jihad and the alarmed Iran is all but ready for full intervention to stem ISIS's advance on Baghdad.

In fact, in a January 2007 paper written by Daniel L. Byman and Kenneth M. Pollac for the influential Brookings Institute entitled "Things Fall Apart: Containing the Spillover from an Iraqi Civil War," the writers foresaw what is now happening in Iraq. They wrote: "Today, only the U.S. troop presence is preventing Iraq, already in the throes of a low-level civil war, from degenerating into an all-out conflict a la Yugoslavia." They have rightly maintained that civil war proves to have several destabilizing effects, and one in Iraq will not be an exception. There will be a massive exodus of refugees and a large grouping of embittered people who serve as an ideal recruiting pool for armed groups. They continued: "The problems created by these other forms of spillover often provoke neighboring states to intervene - to stop terrorism as Israel tried repeatedly in Lebanon, to halt the flow of refugees as the Europeans tried in Yugoslavia, or to end (or respond to) the radicalization of their own population as Syria did in Lebanon ... The result is that many civil wars become regional wars."

Masoud Barzani, the head of the Kurdistan Regional Government (KRG), recently told U.S. Secretary of State John Kerry in Irbil that the fall of Mosul has created a "new reality on the ground that Kurds cannot ignore any more, and they will not be willing to re-enter a new cabinet with or without Maliki without real guarantees for Kurdish rights and full partnership between Irbil and Baghdad."

Qubad Talabani, deputy prime minister of the KRG and a leading figure in the Patriotic Union of Kurdistan said, "We did not leave Iraq, it is Iraq that is leaving us." Furthermore, there were numerous assertions by Kurds that their newlyestablished control over disputed regions is final. A close look at the above statements points out that the Iraqi Kurdistan region, which has almost doubled its size recently with its newly acquired territories that include rich oilfields, has become a de-facto state and will not easily relinquish any of its newly gained power.

Equally, the Sunni Arabs , who have recently tasted the bitterness of Shiites domination over their region, emboldened by their recent gains, and fearing anIranian and U.S. backed attempt to re-impose Shiite control, have made it very clear that they will settle for no less than an independent Sunni regional government and a real say in Baghdad.

Furthermore, Maliki's policies and the recent gains by ISIS and 16 other extremist Sunni groups, have rendered the Sunni Arab moderate voices of Muttahidoon (the Uniters of Reform Coalition) led by Usama al-Nujayfi, and Hiwar of Deputy Prime Minister Saleh al-Mutlaq ineffective. This new reality in the Sunni regions will not only complicate the U.S. and post-Maliki Baghdad government's task to find partners for peace, it has all the potential for creating a situation in Iraq similar to the ongoing civil war in Syria. Very soon ISIS and other extremist forces will be locked in very prolonged and bloody inter-Sunni wars. It is noteworthy that these Sunni extremist groups, who now control no less that 40 percent of Iraq, are trying to destroy the democratic process that followed the fall of Saddam's regime in 2003, and consider the constitution as illegitimate.

For these reasons, any formula leading out of the current crisis should take into account the new facts on the ground. Returning to our analogy, international intervention is necessary here as it was in case of Yugoslavia to put a swift end to the ongoing blood bath in Iraq. However, the 1995 Dayton Agreement has demonstrated, in the case of the former Yugoslavia, you cannot force unwilling people and different religious groups to live in peace in a failing nation state. Although the Dayton Agreement provided for a federal regime in the former province of Bosnia -Herzegovina, today, Bosnia and Herzegovina has three de facto mono-ethnic entities (Serbs, Bosnian Muslims, and Croatians), three separate armies, three separate police forces.

The national governments that were imposed on the warring groups by the Dayton Agreement exist mostly on paper and operate at the mercy of the different groups.

Should Iraqis mange to form a government of national unity to replace Maliki's, the democratic forces will need to draw a two pronged policy to address the major obstacles in the way of peace - the creation of a united front in which U.S., Kurdish and Iraqi forces along with pro-government tribal forces participate - is necessary to dislodge ISIS and other extremist militias from the northern and central provinces. The success of this policy necessitates the cooperation of regional governments, especially Turkey, Saudi Arabia and Iran. Secondly, efforts should be made to engage some armed groups already in control of Sunni regions to have them participate in the political process. Politically, the unmaking of the Maliki regime's exclusionary measures and the passing of the 2007 Iraq Oil Law to set clear legal ground for the administration of natural gas and oil resources between the center and regional governments are needed measures. The KRG should be convinced to settle the status of disputed regions according to Article 140. The U.S. and Iraqi regional governments need to have a say in this process to eliminate these explosive elements in Iraqi politics.

Due to the lack of trust between Iraqi political groups and the non-existence of a proper awareness about modern concepts of democracy and citizenship, it should be ruled, at least in the short term, that a loose federal system should be established with Baghdad left to have a special status and to house federal authorities. Otherwise, prolonged war will create a situation similar to that of Bosnia-Herzegovina, and this will not be in the interest of Iraqis or regional peace. In fact, as the crisis continues, more blood is shed, hatred accumulates, Iraqi communities will become more radicalized and the disintegration of Iraq will become irreversible.

Currently the parliament is paralyzed, Maliki and Iran are pushing for military solution, Kurds are threatening with a referendum of secession and ISIS and other extremist groups are increasing their power in the Sunni regions on a daily basis. All of this gives credit to the statement recently made by Special Representative of the United Nations Secretary-General for Iraq Nickolay Mladenov, that Iraq after the fall of Mosul is a different Iraq. It is for these reasons, some observers have stated, that the fall of Mosul has signaled the beginning of a new era, not only in Iraq, but the entirety of the Middle East, and this is the first crack in the Middle East's Sykes-Picot political arrangement.