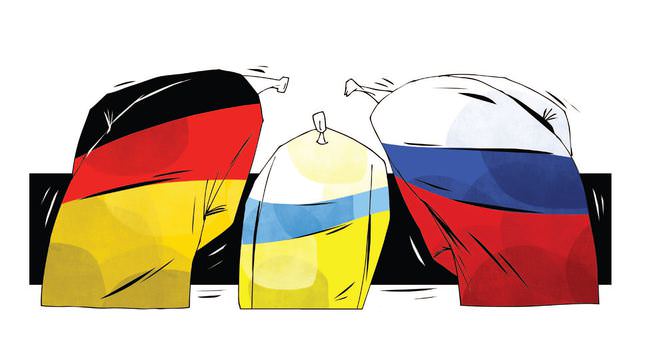 It seems realistic that Germany may be able to achieve dominance over Russia using its capital and technology sector while also expanding German influence to Iran and Central Asia through Russia. Also vital to the process is the integration of Iran into the international system through the leadership of the U.S.

The most important outcome of the crisis in Ukraine is Europe's and especially Germany's revision of their relations with Russia. Yet another important result is that all those in Washington who supported decreasing the U.S.'s military presence in Europe have fallen silent during the Ukrainian crisis. Putin certainly seems to be winning battles, but it seems absolute that he will lose the war. He is repeating the mistake that every other great power has made as it was driven out from its stage in history. Russia's military promises and expenses have already exceeded its economic capacity.

In a recent interview with Der Spiegel magazine, Germany's Minister of Defense stressed the vital importance of German-Russian relations, saying that "Russia is not a partner. Still, it is also true that Russia cannot be allowed to become our opponent." Due to its potential and strategic foundation, relations between Russia and Germany can directly affect the power struggle among great powers across Eurasia. In the last 25 years, German-Russian relations started developing quite differently as East and West Germany were reunited and the USSR disappeared from center stage. For the past 10 years, Germany has been more mindful of its relations with Russia than its relations with many EU members, and it has even preferred Russia over some EU members in some crises. In 2009, Immanuel Wallerstein's outstanding article, "Western Europe and Russia - Coming Together" was surprising to all of us. During a meeting at Yale University in 2011, Wallerstein told me "I have serious suspicions about the future and territorial integrity of Ukraine."

As the Cold War was coming to an end, both Kohl and Gorbachev were aware that Germany and Russia needed each other. But they also knew that it might be a zero-sum game if the limits of rapprochement between the two sides were not well defined. This is still valid today. In the 1990s Kohl was trying to convince the German public of the necessity of rapprochement. Gorbachev's role in the reunification of East and West Germany and his stance toward Germany's membership in NATO laid the groundwork for relations. Chancellor Merkel has always supported closer relations with Russia.

Russia is an indispensable energy supplier for Germany, which imports 92 percent of the gas it consumes. Russia is also Germany's only path to the Caspian Region and Central Asia, which Germany sees as irreplaceable for its global targets and vision. Germany's "multidirectional foreign policy" strategy, which Germany is expected to follow in the future, cannot be a strong equation without Russia. We could believe that Hitler died in 1945, but Lebensraum is still alive! We should always expect this from a stronger Germany unless German minds and characteristics change.

The most vital point is the integration of Iran into the international system through the leadership of the U.S. For Germany, it is not an unrealistic scenario to achieve dominance over Russia by using German capital and technology and expanding German influence to Iran and Central Asia through Russia. Other than that, it is impossible for Germany to ignore Russia in areas such as defense and security. It should not be forgotten that Germany, which is a NATO member, launched its military satellite in Russia in 2008 and the Tandem-X satellite in 2010.

From the perspective of Russia, Germany is the best gateway through which Russia can get involved in the Western system. Germany is both a huge opportunity and a colossal threat to Russia. With a strong economy based on exports and also far ahead of Russia technologically, Germany is the grand center of attraction for Russia. Russia's goal is to make Germany dependent on Russia *for energy supplies while simultaneously directing German investments to Russia in the long run by using the advantage of a cheaper labor force and modernizing itself industrially and technologically by transferring technology from Germany. Russia has to some extent already reached this goal.

Today Germany is Russia's leading trading partner, with 4,600 companies and about 40 billion euros (TL 115 billion) in trade volume. This situation seems to be benefiting Russia in the short run, but it is obvious that this may trigger a process that will work against Russia in the long term. It is not the same thing when Russia cuts off the gas supply to Ukraine as when it attempts to do the same thing to Germany. It would cost Russia much more in such a case. Germany is crucial for Russia in its efforts to be have a voice in the world economy and to be integrated into Europe without being an EU member. Contrary to what Putin thinks, it should be stated that Germany's dependence on Russian energy is not more vital than Russia's dependence on Germany's capital and technology.

Relations between Germany and Russia are also important for the future of Eurasia and the position of the U.S. with respect to those relations. Russia won Crimea while losing Ukraine. Trust in Russia has been shaken once again. These incidents will increase anti-Russian sentiment and nationalism throughout Eastern Europe, especially in Ukraine. Russia's practice of supporting separatist elements and splitting countries with domestic clashes (as in Georgia and Ukraine) is a heinous weapon that will ultimately work against Russia.

It is not a clever strategy at all for a country that consists of 89 semi-autonomous regions, containing 120 different ethnic groups. When that day comes, Russia will lack the economic power to deal with them. Europe will not stay dependent on Russian energy exclusively any longer. The ideal of turning Turkey into an energy terminal has never been a more realistic goal than now. While Iran is being integrated into the system, Turkey may carry Azerbaijani, Northern Iraqi, and Iranian gas to Europe.

However, current projects are not yet sufficient to make Turkey an energy terminal. As stronger ties between Germany and Russia threaten world peace, a Germany whose influence spreads to Iran, the Caspian Region, and Central Asia by controlling Russia through its capital is not in the best interests of either the U.S. or Turkey. It is not a desirable scenario. If Germany happens to use Russia in a strategy of Germany = Mitteleuropa, there is no guarantee that the U.S. will lose less than Russia or Turkey.