Back to 'normality': Hate, violence and war in Israel and Palestine 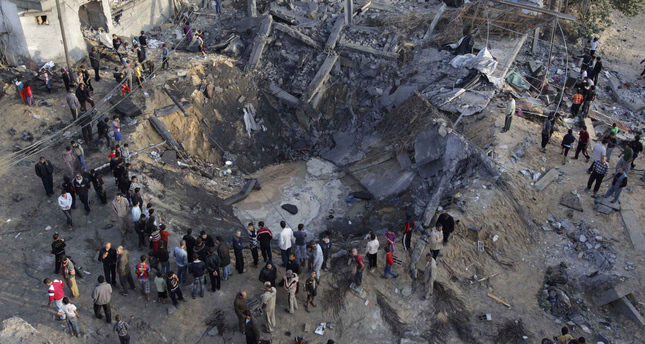 The killing of the three Israeli teenagers ignited anger in Israeli society. Yet, Israel’s disproportionate response -without any evidence- on Gaza not only frustrated Hamas but also the Palestinians, living in Israeli lands

In Israel-Palestine, it appears that the kidnapping and the killing of the three Israeli Yeshiva students last month in the West Bank has opened a circle of hate, bloody revenge, killing and eventually war. The relative and ostensible period of calm that there was in the region before the kidnapping has been irremediable wiped out.

The day after the Israeli Defense Forces (IDF) found the bodies of the three Israeli teens, sadness and agony spread amid the Israeli society, which for 18 days had patiently waited for the boys to come back home. But sadness and agony, unfortunately, were not the only feelings that the people felt: thanks, inter alia, to the media campaign orchestrated by the Israeli government-Benjamin Netanyahu and Naftali Bennett in primis- angry Israelis poured out in the streets calling for an harsh response to Hamas (which has been accused without any proof of the kidnapping and killing of the three Israeli teens). It did not take long for Jewish youth, especially the right wing ones, to attack Palestinians in several locations: in the streets, in the light train as well as inside malls where Palestinians used to work. Israelis had been marching in Jerusalem calling for 'death to Arabs' under the supervision of the police.

Eventually, it ended up with the most atrocious revenge that one could think of: the kidnapping, beating up and killing of a Palestinian boy, Mohammad Abu Khdeir, 16 years old. Violent riots erupted in East Jerusalem (hometown of Mohammad) where Palestinians clashed with the Israeli police and army for more than a week. Protests took place in the Arab neighborhood of Jerusalem and, for the first time after 13 years, Arab Israelis demonstrated in north Israel in cities such as Taybe, Tire and Kolonsoa. Palestinians in all over Israel and in East Jerusalem felt insecure, oppressed and discriminated. This resentment could have paved the way for a third Intifada, as people in Jerusalem and the West Bank were expecting, but the absence of a charismatic and efficient political leadership prevented any kind of escalation that could lead to an uprising.

And then, a week ago, the war in Gaza started. If Bibi Netanyahu wanted to restore the calm in the streets, he has definitely achieved his goal. With the war, people's attention was driven to the catastrophe that is happening in the Gaza Strip. No more riots and demonstrations shook Israelis cities and streets, if not sporadic cases in East Jerusalem. The Gaza war, named "Operation Protective Edge" entered its seventh day Monday, as the IDF continued to carry out massive strikes from land and sea, and Hamas continued to fire rockets at Israeli towns. Since the operation began, 194 Palestinians have been killed and over 1,100 have been wounded. Gaza hospitals are reporting a dire shortage of medicine and equipment, particularly for trauma injuries.

It can be said that Israel has provoked Hamas reaction and the current war by arresting around 500 Hamas activists- who were set free with the Gilad Shalit exchange deal in 2011- during the IDF search operation of the three Israeli teens in the West Bank. Indeed, the Israeli forces harshly attacked Hamas without any physical proof that Hamas was behind the kidnapping. House demolition, killings, arrests, raids and other collective punishments were the reality in most areas of the West Bank.

With the war, also Jerusalem has been targeted as some rockets reached the surrounding areas. Some Jerusalemites have expressed their opinions and shared their feelings about the war. M.M., a 37 years old man, told us: "Hamas must continue launching rockets into Israel because it will make the Israelis suffer the same way the Palestinians are suffering. Firing rockets all over Israel will make Israelis panic and feared so they will push their government to end the war. Also, Hamas is showing that it has the capability to hit everywhere in Israel: this will own Hamas the Israeli respect, as for now we Palestinians do not have any kind of respect from the Jewish state. Gaza does not have any hope anymore and does not have any solution other than fighting with Israel through firing its rockets. I know that people in Gaza are dying, but we Palestinians know that we need to pay a big price, such as our life, in order to be free".

A Hebrew University student, M.A., 25 years old, thinks slightly differently: "The majority of the Israeli Arabs or the Palestinians who live inside Israel support Hamas morally, not for its ideology but as a resistance movement. In the past few years and especially after Hamas took over in Gaza Strip, a suffocating Israeli siege was implemented on Gaza and people suffering over there. So the Palestinians are aware of Gaza suffering and they support the Hamas resistance action. Israeli discriminating policy against the Arab minority gave them no choice but to feel oppressed and resentment toward the Jewish State, which every missile launch from Gaza makes them happy and some of them they even celebrate it here in Jerusalem, because it makes them feel they are hurting the Jewish State ego not its people. Also, a majority of the Arab minority inside of Israel feel sorry for the people in both sides (Israelis and Palestinians), wishing a ceasefire will come into effect to stop the massacre in Gaza and the panic life that the Israelis in the South live. Here in Jerusalem, although they support the resistance, morally, they wish both sides would reach a final agreement that will soon implement calmness that would be pervasive, and tension in consequence will be reduced especially here in Jerusalem and also between Arabs and Jews in general, and the siege will be removed on Gaza, and people can prosper a normal life."

A doctor from Haifa, W.N., 30 years old, said: "Although I do not belong to the Hamas political party, I think Hamas has the right to resist and fight the siege that Israel imposed on them. I would like the war to end. Many people in Gaza are dying. But this is the only option left for them. With this war, the unity government created few months ago between Fatah and Hamas will not be relevant anymore."