Uyghurs' predicatement between sinification and Chinese securitization in Xinjiang 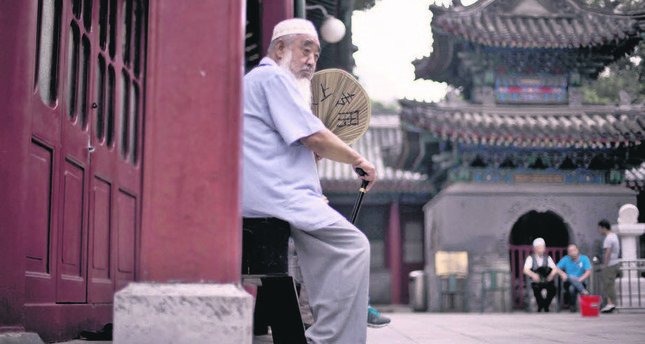 by Eşref Yalınkılıçlı Jul 19, 2014 12:00 am
Chinese authorities appealed to nationalism to mobilize huge Chinese masses when rapid economic growth started to transform the socio-political structure of the country with a lack of adherence to communist ideals during the post-Deng Xiaoping era. In theory, the Preamble of China's Constitution, for instance, defines China as "a unitary multinational state built up jointly by the people of all nationalities," and the Chinese Communist Party (CCP)-led government always promotes Chinese patriotism, which means loving the party-state and obeying the rules of the new order within a class-based society. Such understanding of the CCP's "class nation" consists of "four classes," namely the peasantry, working class, petit and comprador bourgeoisies, who were supposed to be as the main agents of both the Socialist and Cultural Revolutions and are represented as four small stars around the big one (the party-state itself) on the Chinese flag.

Seemingly, there is a euphemism in official Chinese rhetoric even if the constitutional framework asserts that the People's Republic of China (PRC) is closer to the concept of civic nation. In reality, however, CCP elites promote Sinification processes. These imply Hanification ("Hanren," the Han people, the biggest ethno-national majority at approximately 90 percent of the population) in the Chinese context and refer to acculturation, assimilation and the exclusion of other ethnic groups of the PRC. In other words, nationalism is still a blurry concept both for the Chinese state and society and its functional-pragmatic usage in minority affairs has always triggered ethnic nationalism(s) in modern China.
Thus, Beijing's own struggle to create a unified Chinese nation not surprisingly accelerated ethnic consciousness as a side effect of "Han chauvinism" and precipitated separatist feelings among Chinese minorities most notably in Tibet, Xinjiang and to some extent Inner Mongolia. Even though minorities constitute a tiny percentage of the Chinese population (approximately 10 percent), the areas they live in occupy about five-eighths of total Chinese territory and hold a remarkable amount of natural resources that the booming Chinese economy vitally needed. Furthermore, the issue here is how much recent economic development is reflected on the everyday life of Tibetans, Uyghurs and Mongolians. Those people still live in the poorest north and western coterminous regions of China and suffer from a lack of basic infrastructure.

With these realities, the CCP authorities seem as if they have abandoned their historical approaches toward the western minority areas, which had paradoxically proposed exploitation of the minority periphery by the Communist center since the Great Leap Forward of the late 1950s. Accordingly, the CCP put into practice the Great Western Development Campaign in 2000, a state-sponsored economic modernization project during the Jiang Zemin presidency. Zemin's successor Hu Jintao also sustained this concept of economic development in order to diminish ethnic tensions and restore central authority for the sake of the CCP's search for a newfound legitimacy in the remote western borderlands.
However, China's economic modernization policies toward Xinjiang turned into once again created an environment for the nationalization of the Uyghur Autonomous Region (which is called East Turkistan by Uyghurs) over time with the motivations of the One China policy. Their Uyghur problem is perceived as the most visible by the CCP management when the newly independent post-Soviet Turkic Republics of Central Asia became the new neighbors of Xinjiang. Hence, Chinese authorities paved the way for Hanification through dislocation of Turkic Uyghurs and Han resettlement in the region, though they never speak out publicly on Han-based Chinese ethnic nationalism and avoid explicitly using its symbols. In the current situation, the Han population in the Uyghur Autonomous region increased almost to 40 percent, meanwhile Uyghurs constitute 45 percent of the regional demography.

Particularly in Xinjiang, the Chinese leadership has tried to limit ethnic diversity and equal citizenship through a number of covert policies that lead to discrimination and define Uyghurs as "the other." For instance, hereditary permanent residency, or the so-called Hukou system, which shows rural and urban registration of Chinese citizenship and cannot be changed without permission of local governments, locked Uyghurs in their secluded rural households during the de-collectivization process of economic modernization. Uyghurs were not allowed to leave their lands even though the Hukou restrictions were gradually lifted for the Han majority. In brief, Uyghurs have not benefited from the developing economic environment since they never received the blessings of urban Danwei – a system of employment in the state that requires registration from an urban Hukou. In addition, the Mandarin dialect of Chinese is also required for employment so that ethnic minorities have been many times deprived of the economic advantages of Chinese marketization. Moreover, it might be said that Chinese authorities strictly apply one-child policy to Uyghurs together with some sterilization attempts of both Uyghur and Hui (Chinese speaking Muslims) people.

Under these circumstances, the Uyghur community raised its discontent and started to demonstrate against both local and central governments since the execution of 30 "suspected" pro-separatist Uyghurs by the Chinese police during Ramadan in February 1997. In return, either the Chinese leadership or its media wing immediately controlled their Uyghur problem through speeches and publications by underlying the historicity of Uyghur separatist movements since the Ili Rebellion of 1944-49, at a time when Soviet-backed Uyghur nationalists tried to liberate East Turkistan from the control of the Chinese Kuomintang.

The climate created after 9/11 and the war on terror has provided de jure ground for legitimacy for increased Chinese control of the Uyghur case by the spread of cross-border terrorism and religious radicalism that has its source in the Fergana Valley of Uzbekistan and Tajikistan and reaches the big cities of Xinjiang like Urumqi, Kashgar and Turpan. As a response to the fundamentalist movements on its borderlands, the CCP confidently labeled Uyghur separatists and most notably, members of the organization, the shadowy and possibly non-existent East
Turkistan Islamic Movement, as being "Islamist terrorists" to legitimize their struggle with ethnic nationalism.

The conflicts between Uyghurs and Hans reached has its peak in recent years, particularly on the eve of the Beijing Olympics and during the summer of 2009 and afterward. Each time Chinese security forces brutally suppressed the Uyghur population. Together with increasing international condemnations on both the issues of Tibet and Xinjiang, Chinese officials once again went the way of public trials that were frequently used during the rule of Mao Zedong. To show its "transparent governance" despite Western accusations of human rights violations, the CCP tried to regain its declining political legitimacy inside and outside of China via "publicly-witnessed trials" of arrested Uyghurs.

Most recently, Chinese local authorities, in a stadium in front of an audience of almost 7,000, sentenced 55 Uyghurs who were blamed for separatism, terrorism and mass-murder against Hans and allegedly responsible for a suicide-bomb attack on a street market last month in Urumqi, the regional capital. The dissuasive symbolism of these "publicly-observed theaters" performed by CCP officers through the implementation of the "rule by law" instead of rule of law, undoubtedly intended to disturb the ethnic consciousness of Uyghurs to whom, by its very nature, all kinds of organized crimes and disorder have been attributed as a preemptive strategy of Chinese control of Xinjiang.

The incumbent president Xi Jinping, who took office 14 months ago, in his rhetoric also promised more assimilation policies for Uyghurs in order to cope with the ethnic tensions in Xinjiang. That is to say, their Uyghur problem will continue to grow in the near future as China's number one ethnic problem due to the lack of a civic culture mentality. From now on, China has no option aside from bridling its own ethnic nationalism and unitary state based upon Han-centric policies, if the Chinese rulers want to maintain their territorial integrity. The CCP leadership should also spread welfare and prosperity among the minority regions of the country and give up the human rights abuses toward its own citizens with a mentality of good governance, which does not necessarily require liberal democracy, as Westerners keenly try to impose on China since the Tiananmen Square civil uprising in 1989. Lastly, Uyghurs must also give up on radicalism through Salafi jihadism that poisons the world-wide image of Islam and overshadows the rightful resistance of Uyghurs and unnecessarily augments Sino-Turkic antagonism.