Syrian children are crying out for help 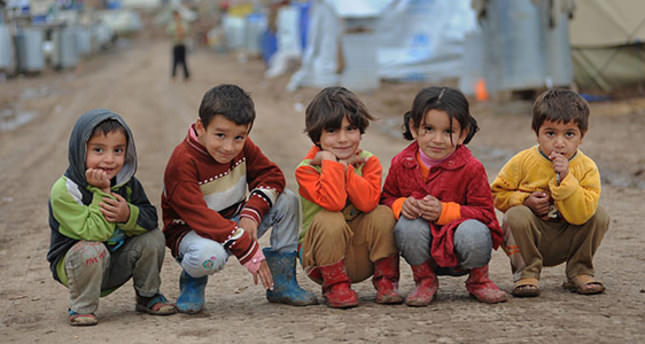 by Muhammad Zulfikar Rakhmat Jul 21, 2014 12:00 am
A video was recently posted on YouTube showing a group of Syrian children taking turns sharing what appears to be a small wrap sandwich. This video not only breaks hearts and has many shedding tears, but more importantly it demonstrates that very little has been done to secure the most forgotten victims of this worsening turmoil.

UNICEF spokesperson Simon Ingram spoke about the worsening reality for Syrian children when he revealed last week at a press conference in Geneva that there are more than 6 million children in Syria that are in dire need of assistance. This situation appears to be exacerbated by the fact that UNICEF has so far received 30 percent of the approximately $770 million (TL 1.6 billion) needed by children still in Syria, as well as those living as refugees in neighboring countries.

This funding crisis implies that the situation might not get any better in the near future. As indicated by Ingram, unless the funding materializes, the agency might be forced to halt some of its operations in the country. All the while the so-called international community has turned a blind eye to the situation. A double standard and hypocrisy have ensued from those who often preach civil liberties and human rights, yet efforts are only made when it is in their interest to do so.

The crisis in Syria, which began in March 2011, has resulted in more than 162,000 deaths and millions being displaced. Children account for a significant percentage of these figures. These children often are intentionally targeted more than accidental victims of war. They have been assassinated by advanced weapons or become victims of brutal torture or killings. Moreover, diseases such as polio have also claimed the lives of children under the age of two. According to Middle East Monitor, hundreds of thousands of Syrian children are at risk of contracting polio.

At the same time, a large number of children have become refugees in Syria's overwhelmed neighbors such as Turkey, Lebanon, Iraq and Jordan.
These refugees have limited access to food, shelter, water, education and medical assistance. Furthermore, it is reported that three out of four
Syrian children have lost members of their family and close relatives. They have nowhere to go and no one to seek protection from. Many of them are deprived of receiving an education. Meanwhile, those who are imprisoned face different forms of inhuman treatment.

They are beingtortured, maimed and sexually abused. Early this year the U.N. claimed that government forces are responsible for "the arrest, arbitrary detention, ill treatment and torture of children."

It can no longer be denied that Syria's future generations are paying greatly for a crisis they did not create, one that is placing a hurdle to their present and future. Syrian children are crying for help and it remains unclear whether anyone is listening.

The world must acknowledge that the future of these children is as significant as world peace and stability, even if the cost of inaction will take longer to be seen and felt. The humanitarian crisis in Syria is very real. It is now clear that children in Syria need real, genuine and serious efforts by the international community to mitigate the rapid growth of the death toll, as well as the increasing figure of homeless, hungry and displaced children.
It is hard to see when all of this horror is going to end, but one thing has to be made clear: if we remain silent, all of us will eventually have to pay the price.