The ideological obsession of the Kurdish movement in Turkey 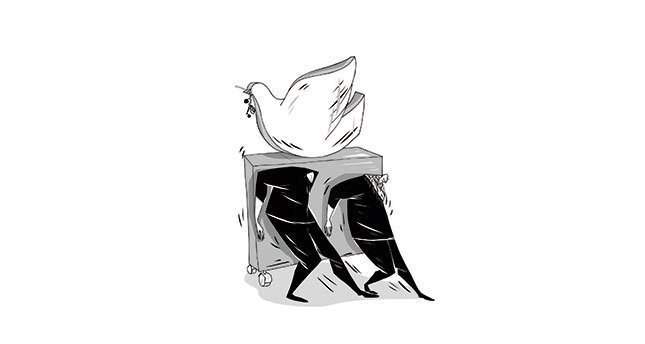 by Rahman Dağ Jul 22, 2014 12:00 am
Let's think about what the Kurdish legal movement is actually made of in terms of the core ideas that are fiercely defended. The first concept that comes to mind, one way or another, for those dealing with the Kurdish question is: The Kurds and their rights that have been fought for. Especially the constituencies of all pro-Kurdish political parties from the People's Labor Party (HEP) to the Peace and Democracy Party (BDP) and Peoples' Democracy Party (HDP) approve of the existence of such political parties as if they were approving their own ethnic existence. That is why while most Kurds are talking about electoral preference, they justify their vote in favor of pro-Kurdish political parties by stating that they are actually voting for themselves. Despite this, the HDP's eagerness and openness to form an unofficial coalition with the Republican People Party (CHP), arguably contradicts the ideals of their electoral base. Of course it does not mean that all HDP voters share the same social democratic ideological background, or at least one of the leftist variations, but it is an undeniable fact that most of the HDP's constituency, who come from the BDP's legacy, consider their votes to be their ethnic presence.

Regarding the CHP's historical anti-Kurdish activities since the inception of modern Turkey and their current position opposing the peace process, the HDP's on-going initiative to find common political ground, as was the case before the March 30 local elections and forthcoming election for president, emanate from ideological closeness. Indeed, in the process of forming the HDP from a platform to a political party, the former president of the HDP, Sabahat Tuncel said that the HDP would be the real social democrat party of Turkey as a part of being a 'Turkey party' policy. Normally, such a claim should be cause for political competition with other social democrat parties –if a separate political party is being formed rather than integrated into an existing social democrat party (in this case the CHP), then it means that the new political party (here the HDP) does not agree with the policies of the extant social democrat party.

Current co-president of the HDP and also the HDP's presidential candidate, Selehattin Demirtas's response to the question of whether the HDP will negotiate with the Justice and Development Party (AK Party) to support Erdoğan's candidacy in the case Demirtaş is not one of the top two vote-getters in the first round of elections is quite indicative of proving the ideological obsession of the Kurdish nationalist movement. This might raise questions as to the reasons why the BDP was abandoned and the HDP was established, but this issue is the content of another paper. His reply mentioned possible common candidates who share common values that are based on social democracy or have a leftist background.

To give more detail, when the CHP and MHP declared their joint candidate as Ekmeleddin İhsanoğlu, who apparently does not have a social democratic or leftist identity, contrarily represents conservatives or, roughly speaking, Islamist positions, the HDP offered candidacy to Rıza Türmen, a member of parliament from the CHP, but it was rejected.

Given that the CHP has always showed an unwillingness toward proceeding with the peace process and whereas the AK Party organized it and is leading the negotiations with the imprisoned leader of the PKK, Abdullah Öcalan, the HDP insists on having a common ground with the CHP due to its social democrat principles and publicly closes all doors to negotiation with the AK Party concerning the presidential election. This, again, originates from an ideological obsession.

The results of the last local election in which HDP and BDP did not receive a dramatic increase in their vote ratio means that most of the HDP's electoral support equals, more or less, the numbers of the BDP's electorate. Is it possible to think that most Kurds will continue to vote for the HDP because they equate their vote with their ethnic existence? Do they consider it while voting for the BDP, which is still leftist-oriented but mostly perceived as a Kurdish party? On other hand, in the same mentioned interview, Tuncel also said that the HDP would cover Islamist and conservative people via convincing Altan Tan, who has an Islamist identity, to stay among its seats in Parliament. In addition, the Democratic Society Congress (DTK) organized a Holy Birth Week celebration for Prophet Muhammad and initiated the Democratic Islam Congress in Diyarbakır.

This information sheds lights on the argument, the BDP tries to change its leftist or, at least, anti-religion position in the eyes of the electorate in Kurdish areas in order to preserve and possibly increase its votes by obtaining some from AK Party voters. On the contrary, the HDP spends a tremendous amount of effort to be seen as a social democratic party by not closing the doors to negotiation with the CHP, which historically oppressed Kurds, but at the same time not giving a chance for negotiations with the AK Party.

Under these circumstances, is it to cruel to suggest that the HDP has an ideological obsession in politics?

From another perspective, what would happen if the HDP were to keep the door of negotiation open with the AK Party? Would the HDP lose votes? Again, considering the last local election, founding a social democratic party of Turkey did not bring a surprising increase of votes. Because of these results, the CHP and MHP's joint candidate is not leftist-oriented, and so the HDP might think that this time it could witness an explosion of votes at the ballot box by gaining votes of leftists like those who attended the Gezi Park protests and other social democrats. These alternative expectations are guaranteed, but at the same time it should be forgotten that all CHP voters do not sympathize with the peace process or support the Kurdish cause. While there is no absolute guarantee to supersede the CHP as being the actual social democrat party of Turkey, what might be the reason for HDP's co-operative political activities?

As most accept that Kurds are comparatively more conservative, the HDP might be afraid of losing votes to the AK Party if the peace process ends in a positive way. It should be more rational to at least keep the doors to negotiation with the AK Party open? Besides, is it not be more beneficial to get more legal rights for Kurds?

Furthermore, is the three-decade long struggle with all the lives lost and costs only for glorifying social democracy in Turkey? Were Kurds who voted for the BDP or HDP do so out of idealism to reach a social democratic resolution to the Kurdish question? Are the undeniable historical connections and ideological solidarity with and sympathy for leftist movements in Turkey throughout the century-long struggle adequate to play a political game in the name of social democracy with Kurdish votes? The leading figures of Kurdish nationalist movements might see the rightful and just future for Kurds in socialism or communism. That is totally accepted. Yet, most Kurds vote for the BDP or HDP for their own future and do not insist on ideological solidary.

The answers of these questions point toward an obvious ideological obsession by all the branches of the Kurdish nationalist movement
This sort of argument might seem too harsh considering the on-going peace process, but in spite of this, these questions must be answered.

The fundamental aim of this piece is not only to delegitimize the BDP and HDP. Their sincere efforts are worth mentioning and are appreciated. However, , in reality, the BDP and HDP are not the only representatives for Kurds – that their ideological stance is not the only guaranteed path for a solution to the Kurdish question should be kept in mind. Therefore, there is no reason to shut the doors to negotiation with the AK Party or Erdoğan's candidacy while still trying to cooperate with ideological counterparts. At least, for the sake of a solution to Kurdish question, every single door should be left open and be free from ideological obsessions.