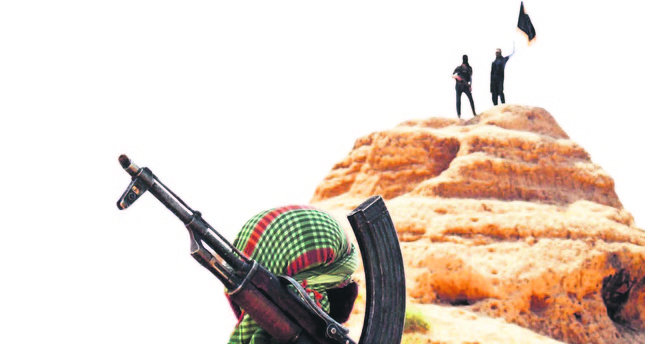 by Rabee Al-Hafidh Jul 23, 2014 12:00 am
The Islamic State of Iraq and al-Sham's (ISIS) dreaded declaration of the caliphate has been met with a wave of rejection and pessimism in our region. Muslim scholars have been quick to give their views on the events and the dangers they present.

The fall of Mosel at the hands of ISIS was initially met by relief on the part of the hapless residents of the city. An understandable reaction after 11 years of humiliation at the hands of the Iraqi government's sectarian army during which they were subjected to worse treatment than that handed out by the Israeli occupation army in Palestine. People were happy to see the disappearance of road blocks and the end of the daily episodes of kidnappings, blackmail and assassinations. The city could finally breathe easily for the first time since 2003. After one and a half months of ISIS control, the atmosphere in the city is eerily quiet and people do not expect the co-existence between ISIS and other groups to last for much longer, especially when considering ISIS's practices, which are not in keeping with the traditions and character of the local society.

These are some of the day to day ramification of the big events of the last few weeks, but the real question is: How can the passage of time in the lives of societies give birth to such undisciplined ideologies so clearly out of step with the overwhelming cultural and ideological identity of our society? How could a small group of young men successfully face down all the fatwa's and decrees emanating from the leading scholars of our time, paving the way to the declaration of their state as a caliphate?

Before we can answer this question, it is necessary to underline the fact that extremism, as a social phenomenon, is not a knee jerk instantaneous reaction to events. Deep societal forces, sustained over long periods, are needed for extremism to fester. Before the forces of extremism can surface and before such groups can achieve any sort of popular backing, extreme pressure and a long period of time are needed for such deviant ideologies to mature in a society that would normally utterly reject such thoughts and philosophies. An understanding of these long term societal conditions is necessary if we were to be able to find an answer to our question.

In the second half of the nineteenth century and at the turn of the twentieth, the term "The Eastern Question" was coined to describe the conflict that Europe had with the Muslim East represented by the Ottoman Empire. Like all victors, the first thing the Allies did after World War I was to dismantle the losing Empire and remove any possibility of a revival. A modern example of this type of behavior is the dissolution by the Americans in 2003 of the Iraqi army and police force and the termination of teacher contracts in what was referred to as the "De-Baathification" policy.

Much earlier, John Philby (the prominent British spy) had identified the grouping that needed to be taken apart and dismantled. Philby said: "The peoples of this mosaic geographical region known as the Arab world have been influenced by the West and the ideas of nationhood; however this emerging Arab nationality has been formed in a Muslim environment. The caliphate in Istanbul had fallen but its legacy is still standing. People might have thought that the Eastern Question had been settled with Sykes-Picot, but they soon found out that they were wrong in this belief. The Sunni representatives of Jerusalem, Beirut, Damascus or Baghdad in the Mebusan assembly are still in charge of Arab societies long after the passing of the Ottoman age and the birth of the independent Arab nation states. The establishment that represents a continuation of the Ottoman Empire has not fallen, but remains in control in every Arab capital city. The same Sunni families that represented their land in Istanbul continue to lead their countries after the departure of the Turks."

"... It took half a century for the Sunni establishment to fracture in the face of the pressures from other minority sects and groups, before the Eastern Question could be truly settled. This truth did not escape the eyes of the outside world. Israel recognized this fact in 1948 and so did America, Iran, France, Britain and the Soviet Union. All agree on the necessity to crush the Sunni street (or at least clip its wings) by creating new "non-Sunni" leaderships from religious minorities so that they would be able to challenge it and defeat it."

The Sunni street (Arabs, Kurds and Turkmens) and its religious establishment were the corner stone of the regional order of the Muslim East. However, the destruction of the Sunni infrastructure in the style of the American "De-Baathification" policy in 2003 was not a realistic option. It represented the cultural, military and administrative backbone of the previous order and without it, it would not have been possible to create the nation states so desired by the new masters. It was thus necessary to dismantle the Ottoman structure and re-use its building blocks to create a different new order.

A prominent feature of the new order was the nationalization of religious institutions, linking them to the political system through the establishment of Wakif (Endowments) Ministries. Private religious schools funded by well-to-do Sunni families that produced a stream of scholars, teacher and educators were shut down and the position of a scholar or imam changed from a highly prestigious one chosen by society based on reputation, aptitude and suitability to that of a downtrodden civil servant whose living standards reflected the low esteem in which he was held by the State; an utterly unattractive position that no young person with a scrap of ability or ambition would ever think of as a career path. Very importantly, however, this treatment was restricted to the Sunni religious institutions. Minority sects were left alone, free to conduct their affairs away from the suffocating attention of the state.

Half a century after the establishment of Arab nation states (i.e., by the end of the first half of the 20th century) Arab society was in relative equilibrium with its values and ethics and making some progress toward mending its torn identity, apparently able to form political views that should have been commensurate with the international political realities of the era.

In the second half of the last century (and more specifically in its last three decades), however, Arab societies experienced what became known as an "Islamic Awakening." As well as the religious and educational aspects of this phenomenon, this cultural wave created strong popular feelings of discontent and dissatisfaction with the performance of the political regimes, the un-ending military and political disasters afflicting the Arab world and the cultural assault threatening the very identity of Arab societies. The response of the regimes to these societal changes was to force the religious establishment to become a servant of politics (and the regimes themselves). Society witnessed the emergence of a new class of "scholars" mistrusted by society but entrusted by Governments to "run" the religious establishment and issue appropriate, officially approved fatwa's and decrees. A clear separation was evident in this era between "official" scholars and others who withdrew from the scene and were later barred from public activities.

This change created a big malfunction in the mechanisms of public guidance and education in societies where the religious establishment traditionally took the role of the honest teacher and guide, trusted by the people in times of crisis. People cannot help but feel that this destruction of the Sunni religious establishment is a continuation of the chapters of the "Eastern Question."

Philby's three dimensional picture of how to break up the strategic structures of Sunni societies and their replacement with sectarian alternatives is progressing at worrying speed. Even more disturbing, are the alliances being made between minority groups and the political ruling regimes in their continuing battle with their own society, a society that did not elect them and they do not respect.

If the different pieces of the jigsaw were to be put together, the overall picture would clearly reveal how ISIS (and its predecessors) were supported and sustained by the political regimes in the region when they insulted the religious establishment and humiliated it in the eyes of the masses. With the scholar thus compromised, the road was clear for young zealots (some sincere, some duped and others opportunistic) to fill this vacuum, especially at a time when the nation is facing a battle for its very survival. The centers of fatwa moved from their natural urban locations to mountain tops. As political regimes weakened, the extremists took their chance to move down from their mountain hideouts to rule our cities. The political class has no one to blame for this but themselves.

* Researcher and expert in Turkish-Arab strategic relations and minorities affairs. Director of the Centre of Al-Mashreq Al-Arabi, Birmingham, U.K.