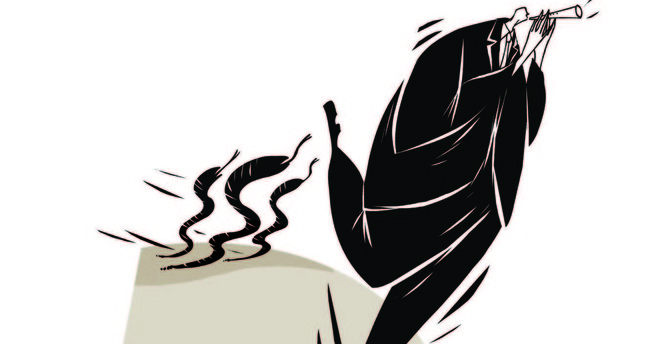 by Manik Mehta Jul 24, 2014 12:00 am
The geographic stretch from Syria through Iraq down to Pakistan has been mired in a violent turmoil with the fearful prospect of escalating into a major regional conflict; however, it can also offer opportunities to form and advance new alliances and partnerships in the region. Iran has been talking about creating a regional security alliance in the backdrop of the advent of a brutally violent militant al-Qaida offshoot called the Islamist State of Iraq and al-Sham (ISIS).

The conflicts in Syria and Iraq have also underscored the need for creating a more viable security system aimed at precluding, and safeguarding against, further upheavals witnessed in some countries of the region. Iran has been trying to feel the U.S. pulse to see how it would react to the idea of such an alliance which will give the former a leadership position in the region.

Iran, whose economy has been hit hard by the sanctions regime imposed by the West, fears that the radical Sunni-dominated ISIS could overrun not only Syria and Iraq but also further expand its sphere of influence leading to the ultimate goal of creating what is envisaged as a caliphate.

These fears haunt not only Iran but also the United States, the Gulf countries and Iraq. Indeed, a top Iranian diplomat recently called for a regional security alliance that will rest on the "three pillars" – Iran, the Gulf Cooperation Council (GCC) and Iraq.

Seyed Hossein Mousavian, who recently presented his latest book called "Iran and the United States: An Insider's View on the Failed Past and the Road to Peace," at the International Peace Institute in New York, is a former Iranian ambassador to Germany who, later, also served as Iran's nuclear negotiator.

On being asked whether he saw opportunities for cooperation between the U.S. and Iran in regard to the situation in Iraq and Syria, which faced a violent and brutal ISIS onslaught, Mousavian told me that Iraq and Syria, in fact, are two areas where Tehran and Washington need to cooperate.

"Preventing the collapse of Iraq as a state and as a nation" as well as preventing "the breakout of a sectarian war across the whole region" are two interests that unite Iran and the U.S., he said. And although the two countries have different interests in Syria, Mousavian said "both are worried about the crisis there." Mousavian further added that disintegration of both countries could lead to greater conflict in the region, and create more uncertainties and new problems that could be fatal to the people.

Iran and the United States are still at loggerheads over the former's nuclear program; there is a lot of work to be done ahead of the July 20 deadline to reach a comprehensive agreement between Iran, the U.S. and the five major world powers, China, France, Germany, Russia and the U.K., concerning Iran's nuclear program. Iran desperately wants to break out of the sanctions regime which has hit its oil economy. Iran hopes, obviously, that the sanction relief of some seven billion dollars allowed last November following an interim agreement halting Iran's nuclear enrichment program, would be followed by a step-by-step lifting of all the sanctions that are making the lives of Iranians a nightmare.

Regional security cooperation, according to Mousavian, would rest on Iran, Iraq and the GCC, the so-called "three pillars" of the region. Mousavian argued that in 10 or 15 years, the United States will leave the region, creating a vacuum that will have to be filled quickly by this regional cooperation arrangement. He predicted that energy independence and drained resources following two major wars in Iraq and Afghanistan, will lead Washington to refocus its attention elsewhere, leaving Iran and Saudi Arabia as the two major regional rival powers. Mousavian seemed optimistic that both Iran and Saudi Arabia could "manage" their relationship in a better way and enter into regional cooperation. After all, Mousavian recalled, both countries had between 1996 and 2005 shared one of their best relationships in the history of their bilateral ties.

Whether Saudi Arabia and the other GCC states will agree to such an arrangement, remains to be seen but Iran, clearly, has ambitions of playing a key role in a region which it perceives, rightly or wrongly, as its backyard. But to achieve its goal, Teheran needs to take into confidence not only its neighbors – Iran should also include Turkey as one of the members of the regional alliance, considering Turkey, which is also a member of the North Atlantic Treaty Organization (NATO), has a direct interest and influence in the region because of its strategic location and its close relations with the other members of the projected regional alliance – but also Washington with which it has to first build mutual trust and confidence which have been eroded following the suspicion and resentment-filled relationship between the two since the 1979 overthrow of the Shah of Iran that resulted in a hostage-taking crisis involving American diplomats of the U.S. embassy in Teheran carried out by Iranian revolutionary guards.

Indeed, Iran will have to do a lot of convincing in the U.S. about its future intentions. Besides resolving the controversy over its nuclear program, Iran could also restrain its acerbic rhetoric against Israel which, like it or not, exercises influence when it comes to Washington's decisions in regard to the Middle East situation.

Once these initial roadblocks are surmounted, Iran could try to sway the U.S. to have a comprehensive dialogue and discuss other issues of interest to Iran, including sanctions, establishing diplomatic relations, etc.

Both Iran and the U.S. realize that today's challenges in the Middle East also present a unique opportunity for mending relations. Mousavian has
tried to explain in his book the Iranian perspective of the relationship, a view that he said has so far been overlooked by the predominantly Western approach to U.S.-Iran relations.

"Tehran and Washington have experienced one of the most – if not the most – dysfunctional relationships" in the international system, he said, "even worse than the relationship between the U.S. and the Soviet Union or the U.S. and Vietnam." Mousavian said that during these long years of hostility, "all Iranian administrations" and "some U.S. administrations" had attempted to mend ties, "and they all have failed."

The Iranian diplomat lamented the fact that the nuclear issue had been, for too long, at the center of bilateral relationship – he called it a "piecemeal approach" – but he should realize that other important bilateral issues would be easy to discuss once the main bone of contention is resolved.

Even though Iran – as well as the United States – expressed an interest in maintaining the cohesion of Iraq, one cannot rule out the possibility of a new order emerging in the Middle East in the future, with the old borders artificially drawn by colonial powers becoming redundant. Such a development brings with it a deadly cocktail of upheavals, human sufferings and what have you, not to mention the disruption of energy supplies not only for the region but for the world, which still draws much of its energy needs from the traditional Middle Eastern suppliers.

A recent comment by Massoud Barzani, the president of the Kurdistan Regional Government (KRG) of Iraq, that the Kurds should now seek self-determination indicates which way the wind can blow; such a development will be tantamount to writing the obituary of the Sykes-Picot Agreement of 1916 with which the British/French colonial powers arbitrarily divided the region into their spheres of influence.

It would also confirm the end of the post-Ottoman order which failed to produce peace, prosperity and stability to the region, as envisaged under that 1916 Sykes-Picot agreement.

Iran has a limited choice – it can remain further isolated in world politics with its insistence on continuing its nuclear program, notwithstanding its avowed peaceful intentions, or abandon it to play a more active regional role that could bring it huge long-term economic and other benefits.