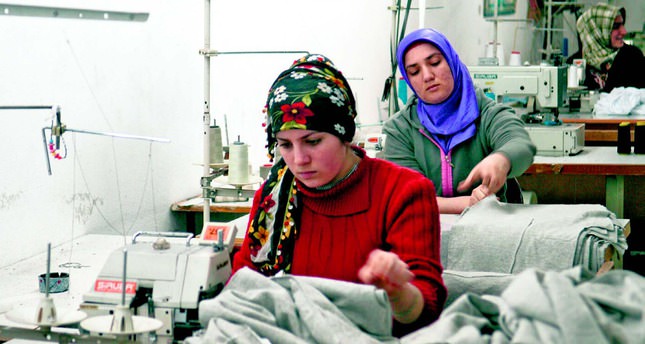 by Bünyamin Esen Jul 26, 2014 12:00 am
Turkey's economy has been going through a strong reform and transformation process in the recent decade. The country's economy is changing both in volume and makeup but this transformation has been faced with serious structural problems. As a typical emerging market, these problems pose challenges to Turkey, which is on the road to securing a flawless catch-up trend to industrialized economies.

When we speak about structural problems in Turkey's economy, what comes to mind are low domestic saving rate, a lack of high value-added production, deprivation of investments in building a skilled workforce, a chronic current account deficit – largely as a result of the lack of energy, especially oil – dependence to import raw materials in main industrial sectors, inefficiency in agricultural production, unhealthy urbanization, huge cohorts of unskilled employers and finally, human capital flight. One of the structural problems in the country is the problem of informality that has hit labor markets, in other words the problem of informal employment.

The term "informal economy" covers a wide area, whereas, here the term is being used within a labor market-specific context. Although there are several definitions of informal employment, the International Labour Organization (ILO) defines the concept as "all the jobs in informal sector enterprises or all persons who, during a given reference period, were employed in at least one informal sector enterprise." The ILO's definition does not define informal employees' statuses in terms of employment relationship and whether it is his/her main or secondary job.
It is possible to simplify the definition as follows: Informal employment is employing someone, without declaring them to the relevant public authorities. Although there are some vague boundaries between the declared and the undeclared, generally, as the work is undeclared, the employment conditions, processes and the economic outcomes can be observed outside the formal economy and out of the public audition. Informal employment may show various distribution rates among different economic sectors and regions, and classically agricultural sectors show a high rate of informality in emerging economies.

Informality: A worm gnawing the economy from inside

Informality has serious implications for an economy at both the macro and micro levels. It harms the economy, ossifies poor working conditions, harms public budgets and creates a social deficit.

At the micro level, informal employment largely results in poor working conditions for the most vulnerable sections of the workforce. As informal employers are not covered within the umbrella of social security, in case of a short-term risk like an occupational accident or in the face of long-term risks like ageing and invalidity, they face serious income losses, and thus, this ossifies poverty among informal workers, which are usually the least skilled workers in the labor market.

Impressive performance in fight with informality

As a country which is a long-term victim of large informality in its labor markets, Turkey, has made impressive progress toward the eradication of informality over the last decade. As the table shows, the informal employment rate has been firmly and constantly declining for the last decade and the decline has reached almost 20 percent in total.

Some analysts define this achievement as an economic miracle. Prof Oğuz Karadeniz, from Pamukkale University, emphasizes that there is no other example in recent history where a country has managed to decrease its informal employment rate by a rate as high as 20 percent. Karadeniz added that, this is the result of new arrangements concerning the social security reform in 2006, the implementation of policy innovations like free-of-charge complaint phone lines, i.e. the CALL 170 Labour and Social Security Communication Line, and of course thanks to the devoted efforts of Social Security Inspectors at the Social Security Intuition (SSI), who are auditing workplaces and implementing policies on the ground.

The fight against the informality problem is not solely a matter of administration. It also requires a change of attitude toward employment and labor markets, not just among employers but also among employees. Unless employees are unaware of the importance of being employed formally, they will not feel the need to work formally. Traditionally, social awareness of these issues is extremely poor in Turkey, and it is not easy to solve problems that have deep cultural and sociological roots exclusively through administrative and legislative reforms.

Thus, Turkey has implemented several huge campaigns aiming to develop awareness among the public on the importance of social insurance and working as a registered laborer. Some of these projects have been funded by the EU, e.g. KİTUP (Supporting Registered Employment Project) and KİT-UP (Technical Assistance for Promoting Registered Employment Project), from funds allocated to Turkey in line with the Financial Instruments for Pre-Accession Assistance.

Turkey's progress toward formalizing its economy has affected the economic structure of the country in two ways: First, as social insurance premium gains increased, the country's social security budget started to settle on more stable ground. In recent decades SSI's premium revenues increased significantly as a direct result of the decrease in informality. Accordingly, social security budget revenues increased exponentially from approximately TL 20 billion in 2002, to approximately TL 142 billion by 2012. The compensation rate of total expenses of SSI by total revenues increased from 71.5 percent in 2002 to 89.6 percent in January 2013.

This positive trend in the actuarial balance of SSI has made it possible for AK Party governments to expand social insurance benefits and increase healthcare services that are covered by insurance schemes.

Mission accomplished in this fight?

Despite significant achievements against informal employment, Turkey still has several steps to take before declaring victory in this war. Although a decreasing informality rate of almost 20 percent within a decade is a world record, still 34 percent of is the country's total workforce is working informally, and this rate is quite high when compared to the OECD average (approx. 17 percent) and the EU average (approximately 15 percent).

Turkey's Prime Minister and AK Party's presidential candidate Recep Tayyip Erdoğan is seeking to make Turkey one of the world's top 10 economies by 2023, at the centennial anniversary of foundation of the Republic. To achieve this ambitious goal, the country needs to eradicate informality in its labor markets on the one hand and activate its potential labor force on the other. In this sense, the country has a long way to go to completely eradicate its structural problems. If one was to take the optimist's side in this matter, it is sound to remember what Confucius said, "It does not matter how slowly you go, as long as you do not stop." Turkey has been keeping up its fight with informality for the last decade, and the results can hardly be defined as tortoise steps. But if you take the pessimist side, it has to be said that Turkey's labor markets are still far from being adequate to support the country's desired catch-up trend.