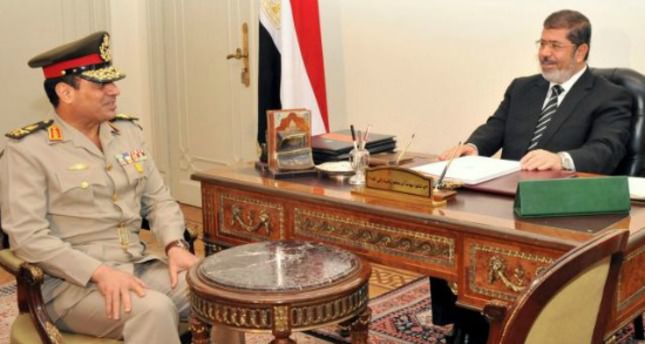 by Ahmad El Nashar Aug 05, 2014 12:00 am
What do the followers of Abdel-Fatah el-Sissi and former President Mohammed Morsi have in common? What do the members of the Egyptian army and members of the Muslim Brotherhood have in common? Followers of Sissi will go as far as calling him a new prophet of our age, which is similar to how Morsi's followers perceived him as the new Salah ad-Din. At the same time members of the Muslim Brotherhood will argue that the end of the group will mean the end of the Islamic revival that is also very similar to the popular Egyptian belief that the breakdown of the Egyptian army will lead to the demise of the Arab world. They have all managed to idolize either individuals or man-made structures into faultless saints or holy shrines. They are examples of the ageless human ability to transfer mortals into sacred, untouchable gods. To Egyptians, it seems to be an inherent practice dating back to the time of the Pharos and despite the disastrous effects this practice has always had on our people, we are never able to stop doing it. It is a practice that opposes the core of the Islamic faith to which the large majority of Egyptians proclaim they belong to. When the revolution took place three years ago, Tahrir Square did not bring forth an iconic hero or group as the embodiment of its values and purpose. Some will argue that this was a shortcoming of this revolution, but in my opinion, it was an ingenuous aspect of a model that was striving to forge new genes into Egyptian DNA. Revolutions are social acts that seek to engrave new attributes onto a society to enable it to progress and develop. In our case we needed to learn how to stop worshipping mortals.

"Whoever worshipped Mohammed (PBUH) then Mohammed (PBUH) is dead and whosoever worships Allah then Allah is alive and shall never die," announced Abu Bakr, the prophet's companion, upon his death and is a statement that we have heard so many times during our upbringing. As humans we are imperfect beings with many shortcomings who commit numerous mistakes. The same goes for the structures we create, whether physical or social, and therefore it is crucial that we always remember that humans and what they have created will never last forever and will require constant revision and improvement. Egyptians seem to be unable to grasp this concept. To be honest, this seems to be a disease that has infected even those who claim to be the most righteous Muslims among us. Through observing the practices of many of the Islamic groups and parties today, or the way we treat our religious scholars, it is shocking and sad to witness how much this deformed practice has influenced our thoughts and actions. We cannot just blame the icons, whether individual or group, for this social behavior because the followers (aka worshippers) contribute to this with their blind followership. Despite the fact that the idolized icons relish the aura of holiness and tend to encourage it, it is their worshippers who play the crucial role in glorifying and magnifying the reality of their being. Even seemingly minor actions such as women placing an army boot on their head or a man kissing and hugging a statue of a political leader hints to how far people are willing to go with this demeaning behavior.

If we are sincere about this revolution we need to stop worshipping mortals. We need to stop glorifying and immortalizing individuals. We need to break through the boundaries of our man-made parties, states and social systems and be prepared to replace them. Individuals are only as worthy as the values they uphold; their accomplishments can never be attributed to their individual efforts. States, parties and groups were created for specific purposes that might become irrelevant and therefore need to be changed partially or even completely. This is easier said than done and it requires courage, faith and perseverance. It also requires us to pay a hefty price. Upholding immortal values such as freedom, dignity and justice in our society is a tiresome but invaluable effort. Striving to uphold such immortal values in our society is the most important practice of worship worth living for.