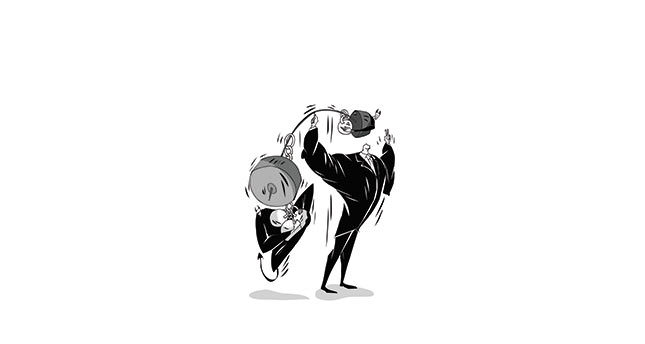 by Ahmet Uysal Aug 13, 2014 12:00 am
Last week Turkey elected its president on Aug. 10 after a hard fought struggle. As the founder and leader of the Justice and Development Party (AK Party), Recep Tayyip Erdoğan won the majority of the vote in the first round. It was the first popular presidential vote in Turkish history as previous presidents were elected by a parliamentary vote, registering Erdoğan's ninth victory during his 12-year rule. The victory has several implications for Turkish politics and Turkey's standing in the region and the world. In this article I will argue that Erdoğan's legacy will endure as a viable model.

Following two decades of single-party rule, Turkey adopted a democratic regime after World War II under Adnan Menderes' rule that was interrupted by a military coup in 1960. The Turkish democracy became flawed and the presidency remained under military tutelage for three decades. Despite democratic reforms, the military maintained its upper hand against the civilian rule that lasted until the 2007 elections when the military tried to prevent Abdullah Gül's election to the presidency because he was not seen as "secular enough." After the blockade of a parliamentary vote, the AK Party pushed for a constitutional amendment to elect the president through popular vote, opening the way for this year's elections.

In the previous general election in 2007, the opposition, including the military, forced Erdoğan to give up his ambitions for the presidency in favor of Abdullah Gül. However, today Erdoğan looks more comfortable after his long struggle. Previously he faced military coup plots in the early years. The AK Party even survived a judicial plot to ban his party by a lawsuit in the Constitutional Court in 2008. As a civilian politician, Erdoğan finally managed to subjugate the military and its generals in 2011 when four generals resigned in protest over his conduct concerning appointments. Now the generals accepted the civilian rule under Erdoğan and both the opposition Republican People's Party (CHP) and Nationalist Movement Party (MHP) ceased to use military pressure to affect policy-making. Civilian control over the military is Erdoğan's biggest legacy in Turkish politics.

Of course, democracy is not a political game between elite groups. Erdoğan's legacy is based on attending to people's basic needs by improving the economy and providing better services such as health care, transportation, education and local administration. As a new challenger, the AK Party government needed to depend on popular legitimacy and support against the established bureaucratic elites, i.e., the military and judiciary, economic elites, i.e., Istanbul's old secular bourgeoisie, and intelligentsia. By adopting a reformist method, the AK Party prioritized popular support over political bargains and maneuvers. In return, the public supported the AK Party against the powerful elites. When Erdoğan came to a standoff with these elites, he referred to the public's decision through elections or referenda.

The AK Party's unquestionable economic, social and political achievements were the main reasons for Erdoğan's victory in the presidential election. The result certifies a living legacy that will last at least one more decade, ending any tutelage over civilian politics. The latest attempt for tutelage was made by the Gülen Movement, a religious-political community, but failed because of Erdoğan's charisma and persuasion skills. The Gülen Movement initiated a civilian plot to topple Erdoğan's government through corruption allegations, hoping this would push people away from the AK Party. However, after feeling the gravity of the danger, Erdoğan quickly went out to the public and explained it was politically motivated rather than an actual legal case. This explanation worked in the municipal elections this year and marked a turning point for him by opening up the way for the presidency.

Despite a large coalition of several political parties supporting Ekmeleddin İhsanoğlu, the former secretary-general of the Organization of Islamic Cooperation (OIC), the opposition camp could not convince Turkish citizens about their candidate's capabilities. In practice, such a joint candidacy would take the race directly to the second round. Their failure was not about the candidate but rather about the marginal orientation of the three opposition parties, namely, the CHP, the MHP and People's Democratic Party (HDP). The Kemalist CHP did not give up its radical secularism and elitism. As the nationalist party, the MHP focuses on anti-Kurdish discourse. The two parties could win the votes in the western parts of Turkey. The pro-Kurdish HDP is a secular and Kurdish nationalist party that failed to attract even the majority of the Kurdish populations estimated 15 to 20 million, as its base is distributed in the east. However, the HDP managed to open to the western cities with Kurdish populations and secular leftists as a novelty in these elections and a promising future for national reconciliation.

The AK Party's national reconciliation is the biggest winner of these elections and will be the main part of Erdoğan's legacy. The combined votes for Erdoğan and Demirtaş add up to more than 60 percent of the vote in favor of reconciliation. The three-decade long conflict in the Kurdish areas cost Turkey 40 thousand lives and billions of dollars. The president Turgut Özal tried to solve the problem peacefully in the early 1990s and failed. Erdoğan's similar efforts failed in 2009 due to international and local political pressures. However, Erdoğan took the risk for national reconciliation with the Kurds again in 2013, which seems to be holding despite some minor setbacks. Turkey's national reconciliation will be a major achievement in a region filled with sectarian and ethnic conflicts.

These elections will have significant implications for Turkey's foreign policy as well. Erdoğan implemented an active foreign policy and preferred rapprochement with the Arab and Muslim worlds. Turkey faces pressing crises in its neighborhood from Iraq and Syria to Palestine and Egypt. As the only democratic Muslim country in the region, Turkey naturally adopts different positions than other regimes in the region. For example, Iraq is facing a deadly political crisis caused by the U.S. invasion and sectarian conflict. Turkey still supports the unity of and friendly relations with Iraq. Under Erdoğan's presidency it will continue to support the democratic ambitions of the Syrian people and help alleviate their suffering. Similarly, Turkey will support the rightful resistance of the Palestinian people. The new Turkey will maintain its open foreign policy toward the West and the East alike.

In brief, the democratic transformation of Turkey under Erdoğan means a real revolution, indeed, a silent one. The election of Erdoğan as president will seal the rise of new Turkey as a Muslim democracy. His success comes from his responding to people's demands for better services such as health care, transportation and education. His popularity and charisma helped subject bureaucratic elites to civilian rules. If the opposition parties that waged personal attacks on Erdoğan do not change and offer better alternatives, which is unlikely, the AK Party can easily stay in power for another decade.