Rabaa Anniversary: A Requisition of a new design 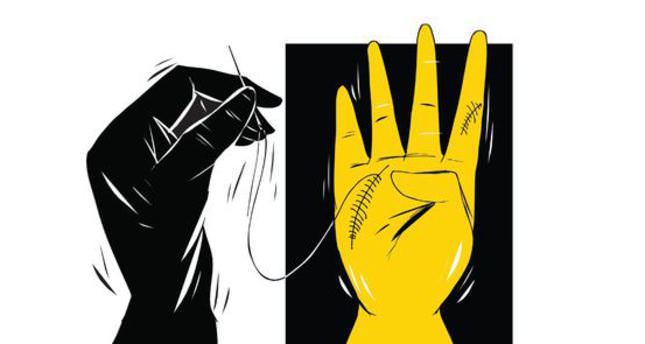 by Ahmad El Nashar Aug 15, 2014 12:00 am
August 2014, a year after the massacre in Rabaa Square, a massacre that will continue to remind us of the evil that exists within some of us. Rabaa is a bloody example of military tyranny. Rabaa exemplifies the heartlessness of social apathy. In my mind, this event will always remind me of how inhuman we are capable of becoming. However, I believe that it is not right to shed light on the wrongdoings of evil without also shedding light on the shortcomings of those struggling for righteousness, and I count myself among them. We made our mistakes that undoubtedly contributed to this painful ending. We must look back at those events not only with grieving hearts but also wise minds so that we may know what it is we can do better in our struggle against injustice and tyranny. As I watch the initiation of the so-called "revolutionary council" and I read the statement issued by the National Alliance Supporting Legitimacy it seems that one year from the event we seem to have learned almost nothing.

One key point from Rabaa is that this is a revolution, not a political struggle. What that means is that in facing the current tyrannical system we do not use typical tactics of creating councils or issuing statements announcing our plans for the day. Revolutions operate outside the boundaries and limitations of the current system. They work in both a planned and unplanned manner. On Jan. 25, people rallied to demonstrate against the police that evolved into a mass sit-in deposing Hosni Mubarak's regime. That was a move that took the regime by surprise at the time. However, the military learned its lesson and made the decision to prevent any sit-ins and violently attacked demonstrations. Therefore, resorting to this same tactic is just futile. Revolutions operate through creative tactics and mechanisms that take its opponents by surprise. Revolutions don't play the politics of today; they create their own rules and dictate their own terms. Creating revolutionary councils and issuing statements of intent are means of playing today's politics.

This leads me to the second key point, and that is we are facing, in part, an organized military system. We are facing intelligence officers, military generals and security officers. As much as we despise their corruption and their behavior, as much as we must recognize, they learn and develop. Therefore, starting demonstrations from the same places, following the same routes in every march and repeating the same tactics in every rally is just plain absurdity. We only need to look across the border at Gaza and learn from the Palestinian movement how resorting to unconventional and creative measures yields fascinating results against huge organized security systems. In Rabaa we faced security forces in the same way almost every time and the casualties were devastating and the achievement was minimal. What is amazing is that for almost a year since then we have been following the same measures that result in the same consequences.

Our creativity should not only be concerned with the military only. If there is one crucial point from Rabaa, it is that we are in a social struggle against a social system of which the military organization is one constituent. In Rabaa we learned that there are other groups in the community that we need to address in different manners. There are impoverished people whose lives have deteriorated over the past few years – from their perspective, as a result of this so-called "revolution." At the first moment they felt there might be a resolution to this situation, they immediately supported it regardless of the price paid. Those people are among the segments we need to address to win over or, at least, neutralize. There is the media community that played a significant role in influencing the perceptions of many segments of society in their stand toward the events. There is the business community that spent millions of pounds to support the tyrannical military in their efforts. Even religious institutions played a significant role in the outcome of the events. These few examples demonstrate the significant amount of work and thought that need to be considered if we wish to widen the groups of people supporting the revolution. The work that needs to be done is not only in the streets or facing security forces; there is awareness and motivation that need to be developed among different factions in various areas of our society. In Rabaa we failed to harness our creativity to develop diverse mechanisms that could reach out to a wider spectrum of groups in our society. We need to admit that in Rabaa, our slogans and communication was actually alienating to many people. The speeches that were made, the media coverage offered and the behavior of many keynote speakers were perceived negatively by many factions of society. This has not changed in the year since the massacre.

What Rabaa also revealed was the influence of external players, both regional and international, in Egyptian affairs. Actually, the regional players played a more significant role in supporting the tyrannical generals. Throughout the past year this fact was demonstrated on numerous occasions. Yet throughout Rabaa protests and the year that followed we failed to address those external players in an appropriate manner. There are a number of reasons for this including the failure to understand the emerging geopolitical map and the associated power structure, a lack of vision and creativity and most importantly, the failure of demonstrating street power. Another ingredient that the Egyptian revolution is missing is its ability to address the local populations abroad. One just needs to look at the composition of people in the various events organized abroad to realize that most of those events are a mini replica of Rabaa in Egyptian.

It has been one year since the Rabaa massacre. I fear that it will soon turn into another Karbala incident where we will wail every year on one of the bloodsheds that took place in human history. I have heard numerous tragic stories of what took place. I have yet to see how we have learned from this unforgettable event. I hope to return to Rabaa one day to salute the martyrs who fell there and tell them that their blood was not shed in vain.