Dear Turkish opposition, what can you learn from another defeat? 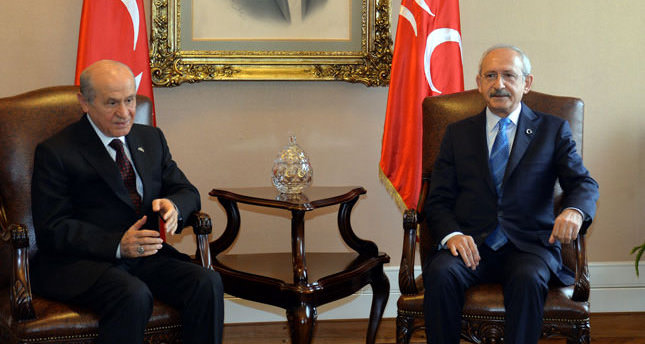 by Pınar Kandemir Aug 19, 2014 12:00 am
Theoretical models may provide hopeful insights, but reality tends to be quite different in Turkish politics. That is to say the recent defeat of the opposition parties in the 2014 presidential election is not a surprise for anybody following Turkish politics. It is merely another result of their desk-based strategy. The two main Turkish opposition parties appointed Ekmeleddin İhsanoğlu as their joint candidate against Recep Tayyip Erdoğan. Twelve other political parties along with several groups and public figures declared they would also support the joint candidate in the election. Some of them even frankly legitimized it by saying it is mandatory to defeat the prime minister. In spite of all this hard work, Erdoğan won the race in the first round by taking 51.8 percent of the vote. In the 2014 presidential election, 75 percent of voters went to the ballot box, while some hardcore secular Kemalist opponents mentioned they did not vote to protest their own parties who obliged them to support a seemingly right-wing candidate.

Although they thought İhsanoğlu was a proper candidate in theory, he turned out to be a big mistake in practice. Apart from their miscalculation in the choice of a preferred candidate, the strategy applied by Erdoğan's opposition to advertise İhsanoğlu was even worse than that.

From the perspective of the anti-Erdoğan camp, choosing a conservative character as the man to beat Erdoğan was a major strategic attempt, it was even a smart move. Yet, they particularly assigned their candidate, İhsanoğlu, the former secretary-general of the Organization of Islamic Cooperation, to win the hearts and minds of the people who vote for Erdoğan. Naively, they wanted to steal some votes from him. However, while deploying this tactic, they critically forgot their very own supporters and ended up losing too much ground within their core base of support.

Since 2002, Erdoğan's Justice and Development Party (AK Party) has been ruling Turkey. Despite several anti-Erdoğan campaigns, his popularity has been on the rise. The results from the latest election will most probably provide adequate proof of this. Although the number of anti-Erdoğan TV Channels, newspapers, journals, intellectuals, and academics outnumber his supporters within those professions, this does not affect common people's opinion of the charismatic prime minister. When it comes to popular will, Erdoğan is the winner of every election.

Although getting rid of Erdoğan rather than his AK Party has been the common goal so far, the strategies applied to do so differ from one group to another.
However, with some exceptions, from the very beginning, the opposition used two major strategies against Erdoğan: they first insulted him and then they imitated him.

Considering their initial reaction to Erdoğan, we might even claim that they ignored Erdoğan before they started to insult him. Obviously, they were thinking that Erdoğan was a passing fad and that he would probably lose his magic after a term of governance, which tends to be the case in Turkish politics. Thus, when Erdoğan shined brightly and for an increasingly longer time in Turkish politics, his opponents realized that they indeed underestimated his potential. After his second election victory, they began to insult his supporters and him by calling them "ignorant and reactionaries."

However, after labeling Erdoğan an Islamist due to his conservative lifestyle, the two main opposition parties, the Republican People's Party (CHP) and Nationalist Movement Party (MHP) went and declared a joint candidate whose only distinctive feature was being conservative himself. They chose Ekmeleddin İhsanoğlu because he was someone who would theoretically be voted by conservative people in Turkey who normally support Erdoğan. However, despite İhsanoğlu's clear background, the CHP and its allies tried instead to paint him as a secular modernist. When the opposition realized that Erdoğan's voters were still determined to support Erdoğan, they changed their strategy to convince their own voters to support İhsanoğlu. Thus, they used up all their energy and motivation to convince their supporters that İhsanoğlu was actually different than how he is known.

Hence, while they were trying to imitate Erdoğan, they faced several critics from their own supporters. Apart from the Gülen Movement, hardly any conservative group voted for İhsanoğlu. Perhaps they thought, "Why vote for an imitation when the original (and more powerful) one is already in office? "

Why İhsanoğlu was the wrong choice

İhsanoğlu was not a candidate or individual who seemed to fit into the CHP's staunchly secular agenda. They accused Erdoğan of being too conservative for Turkey's secular government and found a man who ran a pan-Islamist organization for 10 years and a graduate of Al-Azhar Univetsity instead as their candidate. This point was publicly vocalized just after the election by some CHP deputies who were irritated with the candidateship preference due to this reason.

However, this is not the only reason why he was the wrong choice as there are several others. First, İhsanoğlu does not have any experience in active politics and is not a reputable figure known by most people. His unfamiliar and complicated name even caused small crises since many, including the leaders of allied political parties, were pronouncing it incorrectly. Being a "gentleman" would be crucial for those who do not like Erdoğan's frank style, but obviously it could not be more important than political experience in their eyes.

Secondly, in contrast to Erdoğan's charisma and dominant character, İhsanoğlu came off as extremely passive. His campaign was quite different from Erdoğan's – it was based on media and small meeting strategy opposite to Erdoğan's crowded rallies. Additionally, he seemed to maintain a low-key presence even in TV programs and meetings. He tried to market himself as a moderate and polite character and claimed to be above politics, but it was not clear whether this persona and performance would work politically on Turkish society. In a highly politicized society, this is indeed a crucial measure.

Lastly, his campaign promised a continuation of "Kemalist Turkey," a phrase that most Turkish people have already become fed up with. He represented old Turkey while Erdoğan's slogan was "new Turkey." Interestingly, İhsanoğlu's campaign slogan promised bread (Ekmek için Ekmeleddin - Ekmeleddin for Bread). Of course, promising bread did not work in the new Turkey where people are already used to eating cake. It is true that Erdoğan's AK Party used a strategy of shifting from identity politics to the politics of services in the beginning, but it is over now. Identity politics are back to the fore of political discourse after the economic growth sustained under AK Party rule over the last 12 years.

In a nutshell, the result of the 2014 presidential election does not only prove how successful Erdoğan is, but it is also evidence of the opposition's failure. After several defeats faced by the opposition over the past 12 years, they have much to reconsider. Rather than squandering every opportunity by criticizing Erdoğan with clichés, maybe it is time for them to be self-critical. Surely, this will produce a short-term pain if they want to hope for a long-term gain.