Presidential Election: Erdoğan, Demirtaş and Collapse of the joint candidate 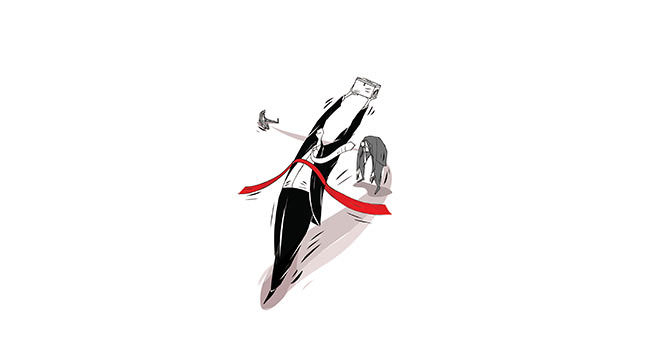 The opposition's first strategy error was to mistakenly believe that antipathy for Melih Gökçek in Ankara is no different to the anti-Erdoğan discourse throughout Turkey. On the other hand, despite being an obscure political figure, İhsanoğlu did almost nothing to make himself known

The presidential elections were left behind and Prime Minister Erdoğan deserved to move to the presidential palace as the first ever directly elected president in the history of Turkish politics. While Erdoğan had 51.8 percent of the vote, joint presidential candidate of the Republican People›s Party (CHP) and Nationalist Movement Party (MHP), Ekmeleddin İhsanoğlu had 38.4 percent and Selahattin Demirtaş of the People's Democratic Party (HDP) had 9.8 percent of the vote. Before evaluating the candidates and their performances, we had better discuss the "low turnout" that stood out in the debates regarding the presidential election.

Analysis of the 73.4 percent turnout

The 73 percent turnout was deemed low by the public. Before deciding whether this voter turnout is low or normal, it would be helpful to look at the factors determining the turnout. These factors can be roughly divided into three categories as bureaucratic, media-related and sociological. By bureaucratic factor, I mean the enfranchisement of non-resident citizens for the first time in this election. Thus, the number of registered voters which totaled 52 thousand in the local elections on March 30 rose to 55 thousand before the presidential elections, following the acceptance also of citizens living abroad as registered voters. However, for several reasons like the bureaucracy's, i.e. the Supreme Election Board's (YSK), failure to get duly organized and allow citizens living abroad to vote only by appointment, and again YSK's ignoring the locational distance of overseas voters to the few ballot boxes, only 10 percent of these 3 million new voters - who added up to almost 7 percent of the total voter base - had their political will reflected in the ballot box. So it should be noted that if the turnout among overseas voters had equaled that of domestic voters, the total turnout would have reached 80 percent. As for the media-related factor, it refers to the possibility that political consulting firms and pollsters may have lulled voters into complacency. That's because opinion polls conducted by many polling companies before the elections, putting Erdoğan's votes at the 55-57 percent interval may have led different sections of the electorate into two different types of complacency. The first is the possibility that in a metropolis like Istanbul, where voter turnout came to be 72 percent, urban population may have perceived the ballot box unnecessary as they somehow predicted the result. The second possibility is that seasonal workers working in agricultural lands especially across Eastern Anatolia, the Black Sea and Mediterranean regions, who are likely to be largely Erdoğan voters, may have considered it not risky to stick with their work. And finally in terms of the sociological factor, when looking at turnouts, the interest of the public in the presidential elections bears resemblance more to the referenda in 2007 and 2010 than to a local or general election. This can be understood to a certain degree. Because 2007 and 2010 referenda had contents with highly technical details that did not directly touch people's lives as much as local or general elections do. When we consider that the presidential election is more about the change of elites and is not directly related to individuals or households as general or local elections are, it becomes easier to understand the low turnout.

There was no doubt that the winner of the election was Erdoğan as the 12th president of the country and his party. In my opinion, the most important factor that carried Erdoğan to the presidential palace is his ability to consolidate his nearly 20 million voters for the last four years since the 2010 referendum, despite those enormous developments in domestic politics like the Gezi protests and the Dec. 17 coup attempt, and despite the turbulence in our region in foreign policy. Along with the consolidation of the party grassroots in the medium and long term, Erdoğan's recognition in the eyes of the public -and the familiarity ensured by this - and his election campaign were the other factors that brought success. During his election campaign, Erdoğan visited 40 cities - 25 of them metropolitan municipalities - and thus held mass meetings in half of Turkey. He made those voters living in cities he couldn't visit, whom he couldn't reach, become familiar with the presidential elections and his candidacy through political advertisements. Right at this point, it is necessary to level a counter-criticism against opposition parties that criticized Erdoğan's election campaign with the "unfair contest" argument. While the AK Party has 8 million members, the total number of members of opposition parties does not exceed 25 percent of that figure. This shows the importance of organization and explains that not everything occurs through government opportunities. Finally, when we ask if there was a decrease in Erdoğan's voter base, we can say that Erdoğan's message before the election - "I will use all my constitutional powers" - that might be possibly read as "I will force the system," may have caused worry among approximately 2 to 3 percent of the AK Party base, which can be termed as "political system conservatives."

Selahattin Demirtaş achieved significant success in the election by receiving 9.77 percent of the vote. Because he raised the 6.57 percent vote of the Independents - the Peace and Democracy Party (BDP) and People's Democratic Party (HDP) circle - secured at the latest general elections in June 2011 to 9.77 percent. In other words, Demirtaş raised the number of voters from 3 million to 4 million in the presidential election, thus winning more than 1 million new voters. Demirtaş's success can be read from two perspectives. The first is about the question "Can the BDP/HDP tradition achieve Turkification?" Demirtaş showed that the answer is positive and also that a beginning is possible in a short time with limited means. Again, he showed that institutional results can be accomplished provided that efforts about this matter are systematic and are continued within the structure of party organization. We can express Demirtaş's presence through figures both as a significant indicator of that Turkification thesis and as a new leader profile for the Turkish left. At the micro level, Demirtaş managed to win more than 5 percent of votes in neighborhoods like Çankaya and Yenimahalle in Ankara, and in districts like Urla and Karşıyaka in İzmir, where a largely "secular/leftist-nationalist" electorate predominates. Hence this picture tells two things. The first is that the Turkification thesis of Demirtaş and HDP is on the right track and that Demirtaş can be an alternative also for the left and the so-called "White Turks" along this track. Secondly, it can be read as the social acceptance, even if slowly, of the reconciliation process.

Joint Candidate İhsanoğlu as the loser of the election

İhsanoğlu, who was supported by more than 10 large and small parties spearheaded by the CHP and MHP, received 38.4 percent of the vote. This political engineering, which was based on the expectation to get votes also from the AK Party base in addition to 26-27 percent vote of the CHP and 16-17 percent vote of the MHP, failed as was expected. İhsanoğlu faced not only a 5-6 percent decline in the total vote of the CHP and the MHP, but also failed to get the expected vote from the AK Party base. The CHP and MHP's tactic of convergence on a rightwing candidate, which was tried in the local elections with Mansur Yavaş and seen as successful, did not go well that time. Obviously, there were many reasons for this failure. The opposition's first calculation error was to mistakenly believing that the antipathy for Melih Gökçek in Ankara is the same with the anti-Erdoğan discourse in Turkey. On the other hand, despite being an obscure political figure İhsanoğlu did do almost nothing to make himself known. Refusing even to hold meetings, İhsanoğlu's chances against his main rival - a professional politician for 40 years - dimmed in a country with a strong rally culture in politics. Adding to this also the fact that the CHP and MHP party organizations left İhsanoğlu alone in the propaganda process and did not provide the necessary logistic support, a political campaign built around the slogan -"Vote Ekmeleddin for Bread"- that was reminiscent of Turkey in the 1970s - further reduced İhsanoğlu's chances. All these factors paved the way for defeat. From now on the CHP and MHP should realize that the dynamics of local and general elections are different from those of referendum and presidential elections. Lastly, if the opposition parties had entered the race with HDP's courage, the subject of this article would have been "what will happen in Aug. 24?" It could have been.