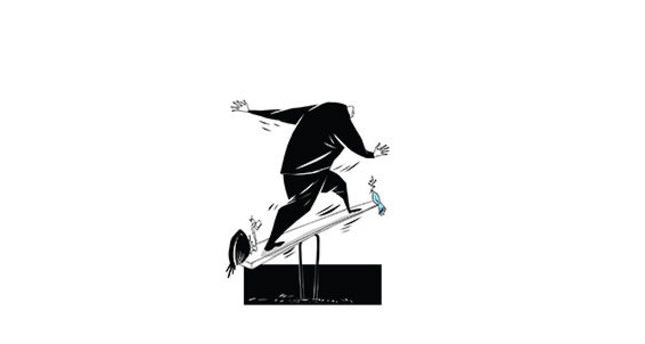 After the occupation of Iraq the duty of Iraqis was to build a better, stable and secure nation, yet they failed. Those who should take the responsibility for this failure are those who are given immense powers by the constitution

I do not think anyone would dare to give a positive or negative answer to this question at the moment. Everyone is aware of that fact. What people are aware of is not solely the risk of the process, but the fact that the problems left by Nouri al-Maliki are huge and deeprooted. Maliki had to concede defeat after all his failed attempts to stay in power. Maliki didn't cling on to power because he understood late that he was not accepted locally or internationally. He did not give up because of a popular demand for change, either. Again, it's not that Iran thought Iraq is "isolated and excluded by Arabs" due to Maliki. No, neither of these arguments are true. The real reason is the total rejection of his position and direct acceptance of Haider al-Abadi right after, with this transition taking place within 24 hours only. This can be explained solely through external threats. The removal of the fig leaf that concealed Maliki's mistakes may open the doors of international criminal courts to him.

Maliki's era ended and it appears that a new era has already begun. But who has the courage to confirm this? There is widespread fear and worry about the possibility of Abadi's failure and about his ability to demonstrate to everyone that he will not be a "carbon copy of Maliki." Strengthening this possibility is the fact that Abadi is a prominent figure in Maliki's party (the Islamic Dawa Party). So, it wouldn't be a surprise if he makes some optimistic statements. Yes, Abadi is charged with being optimistic, but he is cautious. Although world media tries to create the impression that Abadi is responsible for forming a government, the real end in itself was to get rid of Maliki. "Casual" solutions will be offered for Iraq's problems. In the context of political conflicts that broke out in recent years, this is a false impression to which many sides contributed while everyone watched the crisis in Iraq become palpable. For this reason, those who follow the Iraq issue have set out with this impression, with the thought that change will take place when Maliki goes away. That was the false impression. One thing is certain: change will not happen just because an actor has left the stage - although that is extremely important. Change will not take place in this way. Change will work out when the policies change too, in addition to the apparent side or direction.

I don't know how Abadi views his predecessors. He has not made any criticism so far. But daring to stand as a candidate in place of Maliki, Abadi reacted to him, in a sense. And this, in itself, means many things like rejection of Maliki and his policies.

After the occupation of Iraq in 2003, the duty of Iraqis was to build a better Iraq; a secure, stable and prosperous Iraq and a safe, free and dignified life for Iraqis. Iraqis failed at this point and those who should take the responsibility for this failure are the ones who are given immense powers by the constitution. I mean the Chairman of the Council of Ministers. It's not that Maliki has been unjustly found to have failed; he has been unsuccessful as those U.N. organizations, that assess and evaluate management quality internationally, have confessed. If Haider al-Abadi copies Maliki- that is to say, the Dawa Party's policies - he will condemn himself to failure from the start, and I don't think he will be a good actor in this scene and under these circumstances. That's why Abadi wants change as well; because he has to achieve success. The difficulties and the files left by the predecessor to the successor are not expected to be resolved quickly. The prospective roadmap should primarily focus on removing difficulties and adopting a significant policy. In my opinion, there is a conflict more dangerous than secession; a civil war in this country.

After the secession of the Kurdistan Region, serious differences emerged between the six insurgent provinces and the central government, which is more comprehensive and dangerous, with regard to administration, economy and security. Sunni Arabs have come to think they don't have a place in their motherland. Their identity, faith and even their existence have become targets. They want a civil state with institutions and laws, a state that is free from discrimination and injustice. But since 2005, the other party has emerged as a sectarian theocratic government that doesn't trust or recognize others in Iraq, which is full of many ethnic identities, beliefs and faiths. If things continue like that, Iraq will face unavoidable secession. If the forthcoming government aims and desires to strengthen national unity and abandon the policies of sectarian discrimination, Sunni Arabs should be just and fair toward these reforms that will end injustice and re-establish their trust toward Shiites who are their equals in terms of religion and humanity.

Maliki has relentlessly displaced and driven away Sunni Arabs by cutting their throats with counterterrorism laws and pressed them hard by taking away their livelihood with laws of responsibility and justice. Sunni Arabs have stood up against this unprecedented ethnic cleansing in Iraq especially in the Maliki era. Thus they were obliged to take up arms and open their doors to the extremist groups which they fought between 2007 and 2008. They had no other option to survive.

I said Maliki left a heavy legacy. The difficulties we meet are very dangerous and manifold. Foremost among them is the possibility of a civil war waged for the sake of justice and equality in the case of secession and senseless behavior. And that will lead to totally different paths. Some try to minimize the dangers posed by ISIS (the Islamic State of Iraq and al-Sham) without doing anything to get to the root of the problem faced by Iraqis and without raking up the past.

This group emerged out of the shadows of all-pervading injustice, marginality and exclusion, growing and becoming furious as Sunni Arabs became more desperate. It is hoped that when justice, equity and dignified life is felt, the situation will change. But if that doesn't happen, the oppression, war, and displacement suffered by Sunni Arabs will continue to exist just as it has done so far. In a nutshell, this would mean Abadi finishing the unfinished jobs left by Maliki. By that, I mean civil war and secession. Let's say goodbye to the state which was called Iraq once upon a time.

Attacks on Haviya, Fallujah, Tikrit, Deluiyah and other regions through heavy artillery fire and barrel bombs, dropped by airplanes, continue. In Baghdad, Basra, Diyala and some areas north of Babylon, the lives of Sunni Arab youths are at the mercy of sectarian militias. This consciously pursued policy can be explained only as a move intended to arouse sympathy for radical Sunni movements. In addition to driving these youths to despair and getting them in trouble, it also encourages them to join the armed militias - although they are not inclined towards any particular movement - and achieve this. They are forced to do this as a last resort.

In such a case, Abadi is not in an enviable position. If he wants to follow in the footsteps of his predecessors, he will fail. If he wants to make a radical decision for change, he should persuade Sunni Arabs to not get angry with Shiite Arabs. It is not an easy task at all and requires a delicate balance. I don't think Abadi is qualified for this task. So, he will need help from others. Every time he attempts a reform without hesitation, he will receive a positive answer with respect to help and support from both inside and outside the country. This favorable atmosphere and his personal duty require him to never waste this opportunity. Because, his predecessors could not make good use of this opportunity, and hence lost.