Moving into the arteries of the system 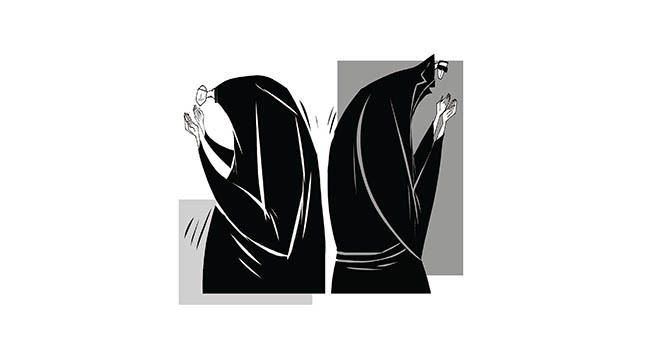 by Burhan Doğuş Ayparlar Aug 28, 2014 12:00 am
Turkey harbors more than 21 religious movements and each has more than 100,000 members. As one of these religious movements, the main difference between the Gülen Movement and other radical Islamic organizations is the method that they give importance to education and technology. By using the latter, this group ensures that those members who join them end up pledging their allegiance while they are young; paving the way for them to get a proper education and prepare them so they can get positions at government agencies. With this method, they avoid a direct conflict and argument between the state and themselves and simultaneously place members into various government agencies, also known as Trojan horses, and have them act completely in the interest of the movement in order to help "capture" the agencies they are working inside of. When we look at Fethullah Gülen's (the leader of the Gülen Movement) speech, on June 18, 1999, his advice to his followers included suggestions to not act until gaining all the power of every constitutional organization in Turkey – that shows there is a methodical plan going on.

In the early 1970s, the Gülen Movement was born as a branch of the Nur Movement, which was established around the famous writings of Bediuzzaman Said Nursi, the Risale-i Nur Collection, a commentary on the Quran that exceeds six-thousand pages. Even though in the beginning, the Gülen Movement started as a common religious organization, one thing made them special among other organizations. By applying the advices of their leader, the members of the Gülen Movement began to mask themselves in order to gain power. The members thought the strategy was in line with Islamic rules, as they were doing it in order to survive in undemocratic Turkey. However, the main purpose of this behavior was going to reveal itself in the future.

During the 1990s, the tactics of the Gülen Movement awaken Graham Fuller's (CIA appointed vice-chairman of the National Intelligence Council) interest in the movement. Fuller is the one who assisted Gülen flee Turkey in 1999, theoretically to get medical treatment, but also to flee prosecution for remarks he made advocating the overthrow of the system. In addition Fuller continuously and publicly supported Gülen in his articles, books, and speeches.

In 2004, in his article in The Washington Quarterly, Fuller said, "[…] the largest popular movement in Turkey, the Nur Movement (and its largest and most prominent branch, the movement of Fethullah Gülen), springs out of the same traditional Anatolian heartland and propounds an apolitical, highly tolerant, and open regeneration of Islam focused on education, democracy, tolerance, and the formation of civil society based on the moral principles of Islam." Fuller presented an official letter of support to the United States District Court for the Eastern District of Pennsylvania, in order to assist Gülen get his green card for the U.S.

This policy leans on the idea that the Gülen Movements is less harmful than terrorist organizations, and if you use them in the right way, they can even be useful. When we look at Turkey's example, while terrorist organizations would not be able to succeed in taking charge of the police force and/or the Justice Department in the country, the Gülen Movement could succeed in doing so, and in a short time period as well, and then they could continue their dissemination. In addition, Iran's rejection of Gülen Movement schools, and the closing of 16 Gülen Movement schools in Russia and the final closure of 4 faculties in Iraq on December 30, 2009, shows that this movement does not carry any heavy weight in countries outside of Turkey and African countries.

On the other hand, the Gülen Movement has become the owner of nearly a thousand schools in the world, and the controller of a serious amount of capital. They are especially organized in poor African countries, and they succeed by obtaining a grip on the resources of those countries. The movement does not balk at any expense in order to give its followers the best education they can; it sends them to developed foreign countries like the U.K. or the U.S. to get the best education available and to learn English. After their education, the group brings those followers back to Turkey and gives them important tasks.


According to Stratfor's global intelligence report, the Gülen Movement wields considerable financial power, including over the Turkish media. In the report it reveals the methods of the Gülen Movement by saying, "More than a decade later, the Gülen movement has a presence in virtually all of Turkey's power centers. In its earlier years, the movement moved much more discreetly, focusing on moving into the 'arteries of the system' without drawing attention to itself." According to Jane's Defence Weekly report, the Gülen Movement alone controls more than $25 billion (TL 54 billion ) in various companies and assets around the world and a recent report prepared for the U.S. Congress on Turkey, Politics of Identity and Power said, "The Gülen Movement controls a network of schools around the world, including some in the United States; universities; banks with more than $5 billion in assets; non-governmental organizations; and newspapers, magazines, and television networks in Turkey and other countries." There is a growing body of opinion, not only in Turkey, but among foreign observers including Gareth H. Jenkins, nonresident Senior Fellow with the Central Asia-Caucasus Institute; Soner Çağatay, director of Turkish Research Program and the Washington Institute for Near East Policy; Dani Rodrik, professor of International Political Economy at the John F. Kennedy School of Government and Harvard University; Michael Rubin, resident scholar at the American Enterprise Institute and senior lecturer at the Naval Postgraduate School's Center for Civil-Military Relations that the Gülen Movement is capable both of influencing the judiciary system and the path of the Ergenekon investigation.

Whoever touches them burns

Normal sympathy toward the Gülen Movement by the Turkish public has recently been ruffled by a series of controversies when people who criticized or acted against the interests of the movement began to be punished on a regular basis. On September 26, 2008, journalist Merdan Yanardağ was taken into custody in the Ergenekon investigation, and according to Gökay Sofuoğlu, president of the Baden-Wurttemburg Turkish Assembly, the timing of the custody process was not a coincidence as, Mr. Yanardağ was planning to attend a conference criticizing the Gülen Movement.

When İlhan Cihaner, the chief public prosecutor of Erzincan, looked into the activities of religious movements in the city including the İsmail Ağa Community, the Süleymancı sect and the powerful Gülen Movement, he began to collect evidence of alleged criminal activities including the fixing of state contracts and the obstruction of justice by members of the communities. On February 16, 2010, Cihaner was arrested and charged with being a member of the Ergenekon organization.

A third related arrest was that of Hanefi Avcı. Avcı is a nationalist-conservative police chief who once had close ties with the Gülen Movement, sending his children to movement-affiliated schools. According to his latest book, "Haliçte Yaşayan Simonlar: Dün Devlet, Bugün Cemaat" (The Simons Living on the Golden Horn: Yesterday the State, Today the Community), he discovered that a group under the Gülen Movement based inside the Turkish police forces had gone "rogue." They started to act against people who were opposed to them by fabricating evidence and illegal wiretapping. His book sold more than 570,000 copies, which spurred media companies with close ties to the religious movements to publish salacious stories regarding Avcı's private life. On September 29, 2010, Avcı was arrested for allegedly being a member of the "communist" terrorist organization Revolutionary Workers Headquarters.

And the most criticized act of the Gülen Movement was the attempted coup d'état on December 17, 2013, when the Gülen Movement, through its Trojan horses in the police department and the Justice Department, attempted to overthrow the elected government by conducting a corruption investigation on members of the government. After its failure, the Gülen Movement reached a new low and released montaged voice recordings of the Prime Minister Recep Tayyip Erdogan in order to damage his credibility before the presidential election.