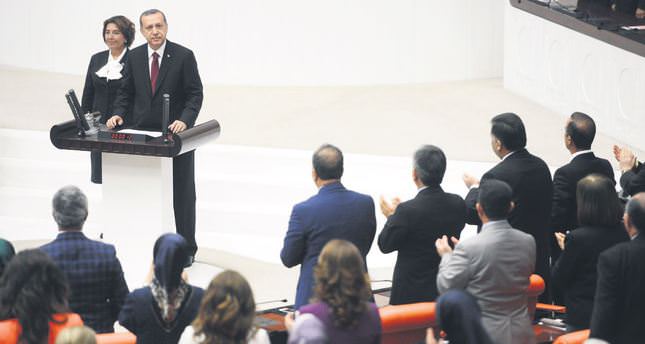 by Jehan Sher Yusufzai Aug 29, 2014 12:00 am
It is not an easy task for a politician to become a popular leader overnight until he renders tireless services to his people. The son of a coastguard officer, who was born and raised in Istanbul's Kasımpaşa neighborhood, Recep Tayyip Erdoğan has rejuvenated Turkey's past glory through such efforts. Entering politics in 1970, he became popular in 1994 as mayor of Istanbul when he resolved the urban problems of the megacity. Erdoğan and his longtime ally, Abdullah Gül founded a new political party, the Justice and Development Party (AK Party) in 2001, which won three consecutive elections from 2002 to 2014 under Erdoğan's dynamic leadership. After he became prime minister in 2003, a new era of prosperity and development began in Turkey.

When the AK Party came to power, Turkey was passing through a tough time as it was gripped by political instability, economic disparity and social uncertainties. To bring the country back on the right track, Erdoğan initiated new megadevelopmental projects. With the completion of these projects, political stability, economic prosperity and social justice returned to Turkey. With this achievement, the process of a new Turkey in the making was begun. With the emerging of Erdoğan's AK Party, the days of frequent coups and rocky coalitions came to an end and the government and army came on the same page. Political activities started from the grass roots level and the hitherto deprived rural communities got a big hand from the country's politics.

With this reputation, Erdoğan emerged as a new global player. His trusted colleague and talented foreign minister, Ahmet Davutoğlu, reorganized the country's foreign policy that was based on the principle of zero problems with neighbors. Erdoğan's economic policy brought widespread prosperity that has tripled the annual income of common Turks. The GDP has risen from $200 billion to $800 billion (TL 430 billion to TL 1.7 trillion).
Some gigantic developmental projects were started including a high-speed rail network, huge airport as well as a modern bridge over the Bosporus.
It has attracted a great number of investors and created innumerable job opportunities for the youth. With Erdoğan at the helm, Turkey's goods have reached all emerging markets of the world. The AK Party's social policies have also been greatly appreciated. In Erdoğan's 12-year rule half a million homes have been distributed among the people and special attention has been paid to Islamic education, new mosques are being built and also the ban on women's headscarves has been repealed.

Turkey's humanitarian assistance has also gained new momentum. Furthermore, the country is now a hub of modern education where more than 100 new universities have been built. Foreign students from Asia and Central Asian states now come into Turkey for higher education. Erdoğan's recent win in the presidential election has silenced his critics. He sworn in as Turkey's new directly elected president yesterday while his trusted friend and colleague Ahmet Davutoğlu is already the new prime minister of the country.

Since Erdoğan appeared in Turkish politics, the Western media has left no stone unturned to criticize him. After the elections, it was reported that only conservatives and rural Turks had voted for Erdoğan and secularists, liberals and nationalists had voted for his opponent Ekmeleddin İhsanoğlu. However, the fact is that Erdoğan's voters are politically mature and he draws respect from all segments of society and not just from conservatives or rural areas. It is strange why the Western media is so upset at his achievements - it is because that his opponents do not want to see a happy, stable and powerful Turkey. Erdoğan's political philosophy is based on peace, prosperity and brotherhood. He is neither a sultan nor an authoritarian leader, but a sincere Turk who wants to restore the ancient dignity of his beloved country. He does not want to introduce political Islam in Turkey. He is a simple Muslim and loves Islamic traditions. It is difficult for him to impose his will on 14 million Turks. Turkish people are mature enough who know good and bad very well. I think being a Muslim is a big issue for his critics. He is a warmhearted person and loves to serve humanity. In his victory speech he spoke these unforgettable words: "I will not be the president of only those who voted for me, but I will be the president of 77 million Turks." It proves that he is clear in his goals. He has faced a series of political scandals in his 12 years in power, including the Gezi Park scandal, the Soma tragedy and the ban on Twitter and YouTube. It was learned later that his political rivals had orchestrated all these charges.

Ahmet Davutoğlu re-drew the boundaries of the country's foreign policy during his stint as a far-sighted foreign minister. It has also rejuvenated the deep-rooted historical, cultural, social and religious relations with Arab countries. Muslim countries are the center of foreign policy of the AK Party. Pakistan and Turkey enjoy strong relations. Both countries share similar views on regional and global affairs. The deep-rooted relations of these two great Islamic countries are not restricted only to their governments but people-to-people contacts also exist. Pakistanis and Turks are brothers and they take great interest in one another. Turks always treat Pakistanis with great reverence whenever the latter visits the historic city of Istanbul.
Both countries have always assisted each other in tough times. There are a lot of Turkish companies doing business in Pakistan. These reputed companies play a pivotal role in the development of Pakistan. Erdoğan specially mentioned the name of Islamabad in his recent victory speech. In the past decade the ties between Turkey and Pakistan have seen tremendous growth. Long live Erdoğan and long live Pakistan and Turkey friendship.