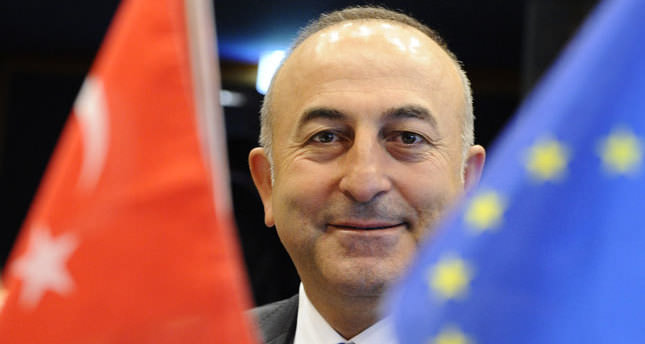 by Emre Yılmaz Sep 02, 2014 12:00 am
After a very crucial decision taken by Russia to ban the importation of food and agricultural products from those who implemented sanctions on Russia, there is an increasingly large expectation that trade between Turkey and Russia will be boosted considerably in favor of Turkey in the next year. In this sanctions quarrel, although the main goal of the Western countries and especially the EU is to charge Russia, NATO member Turkey ,which is also a candidate for EU membership and a part of the West, is in a position to take advantage over crisis. This is the crystal clear proof that without Turkey, the effectiveness of the Western sanctions on Russia will be limited. Moreover, in the changing international political structure with its significance in terms of geography, economy and embraced western values, Turkey appears to be an indispensable country for an influential West in the near future.

Considering the gradual multilateralization of the international system together with the EU's external and internal goals, and even more its transformative effects on Turkey, Turkey and the EU need each other more than ever. In a broader sense, Asia's uninterrupted economic and political rise challenges the present international system that has been shaped for centuries by Western countries. In this context, it is almost universally accepted by scholars that Turkey, which embraced Western values since its establishment, as a member of NATO and proceeding for full membership in the EU with its geopolitical position, will gain currency for the West. Thus, repairing the stalled relations in the last couple of years between Turkey and the EU would be influential for overcoming their problems, yet it is more dependent on the EU to abandon their old attitudes toward Turkey.

Currently, Turkey, with its 50 years of experience on the road to the EU is probably less hopeful than the Western Balkan countries, which gained their independence after the Cold War, for its future in the EU. Abolishing the entrenched restrictions, Turkey undertook several crucial steps both in low and high politics, from the Cyprus dispute to democratization and normalization of domestic politics. However, despite no important steps being taken by the EU even after it was proved with the referendum on the Annan Plan that Turkish Cypriots do not promote deadlock. Even so, Turkey was continually blamed as part of the lack of a solution. Moreover, European leaders' point of view on Turkey's accession and their remarks that Turkey will never join the EU fueled the stagnation of relations.

In the last decade, Turkish foreign policy has embraced pro-active and multi-dimensional characteristics that allowed Turkey to deepen its ties in both regional and international contexts. Russia is one of the important countries among these actors. It is quite telling that even though Turkey and Russia have been sharing different angles on several issues such as the Syrian civil war, the military coup in Egypt and Ukraine, their bilateral relations in all fields have not even been deteriorated over these substantially important issues. On the contrary, the hope for full membership in the EU among Turkish citizens decreased due to the EU's economic crisis in a time when the Turkish economy was booming and, more importantly, the EU's unwilling attitudes toward Turkey in the continuing negotiations has gradually continued to decrease through unreliable and unacceptable approaches like the recent allegations of German spying.

For several years, the more Turkey has struggled to demonstrate its European-ness, the more restrictions it has faced. Now is the time to put them aside and to map out an elaborately prepared strategic concept for a stronger West. It has been repeated for several years and now should be well grasped that what Turkey offers to the West is opening up the very rich natural resources in the Middle East and Central Asia, a growing rising and robust economy, contributing to the EU's multi-cultural structure with its multi-ethnic society, even the influential cooperation of EU-NATO and so on and so forth. Nevertheless, all required a plausible approach and real political will by the EU. This is not an arrogant discourse, rather it is a reality that in the changing international political structure, Turkey stands out as a complementary piece of the Western puzzle. For this reason, the EU's old attitudes toward Turkey should be given up so as to revitalize Turkey-EU relations.

So far, the crisis that EU confronted in domestic politics unexceptionally caused deepening of the EU and current Ukrainian crisis would be great opportunity to strengthen political, economic and cultural ties between Turkey and the EU. Especially, in Turkey, a new era emerging under the name of "New Turkey" which aims rapid democratization would procure positive tendency to relations between Turkey and the EU.

From now on, coupling the EU's transformative affect with Turkey's increasing significance through its economic leap and embracement of Western values, there are several reasons to work together, from energy issues to economy. In this context, it has clearly surfaced that the EU's dependency on Russia made them cautious while defining policy for punishing Russia's aggression. It is mandatory for European countries to diversify its energy routes in order to keep stability in its energy security and to enlarge its maneuverability in foreign policy. Paying special attention to Turkey's ambitions to be an energy hub along with its improved relations with Azerbaijan and the Kurdistan Regional Government (KRG) as well as a possible solution to the Cyprus dispute and the Iranian nuclear problem, Turkey seems like necessary country for diversifying and maintaining the EU's energy requirement. Economically, there is an impending crisis, namely the Transatlantic Trade and Investment Partnership (TTIP), in continued negotiations by the U.S. and EU to abolish restrictions and that would heavily harm the Turkish economy. What should be done is not to exclude Turkey from the TTIP, which does not only reflect the West's economic deepening but also consolidation of Western political weight against Asia's rising influence. Otherwise, fuelling Turkey's stagnated political relations with the EU by excluding Turkey economically from the West possibly would compel both sides to a line that has no way to back.

It should also be stated here that Turkey should neither turn its traditional Western-based foreign policy back nor take a position in polarization. For both sides, improving relations will avail to cope with regional and global issues, especially for this time when both sides are pondering how to come up with policies for their respective regions.

Zbigniew Brzezinski, in his well-known book "Strategic Vision: America and the Crisis of Global Power," comes up with the idea as a strategic vision that the U.S. and Europe should jointly expand the scope of the West by reaching out to two important countries, namely Russia and Turkey. It seems that the convergence of the West and Russia will no longer be possible if there is no "Munich Diplomacy" by Western countries. Yet, Turkey has been different with its Westernization process since the very beginning of its establishment and its keenness to prove its own democratic political structure.

The eagerness of Turkey for EU membership is even seen in the new Turkish government formed under the leadership of former Foreign Minister Ahmet Davutoğlu with the incorporation of two preeminent and well informed actors regarding EU affairs. First, Mevlüt Çavuşoğlu, who was the previous minister of EU affairs and chief negotiator, former Parliamentary Assembly of the Council of Europe (PACE) president between 2010 and 2012 and honorary president of PACE appointed as the Foreign Minister and second, Volkan Bozkır, who served as the permanent representative of Turkey to the EU between 2005 and 2009 and secretary general for EU affairs between 2009 and 2011 was appointed as the minister of EU affairs and chief negotiator. Both ministers have released their first remarks saying the "EU is a strategic target of Turkey." It is quite obvious in the "new" Turkey discourse that the EU occupies a very crucial place in Turkish foreign policy and this should be reciprocated by the EU. It is very distinct that reviving Turkey and EU relations would be very helpful for both sides to deal very effectively with regional and global issues.

In a nutshell, in Turkey a new era is emerging with a strong emphasis on the EU accession process, nevertheless the EU's sincere and concrete attitude toward Turkey will be key for the destiny of Turkey-EU relations. Just thinking that if Turkey had been offered no restrictions for its agricultural and food products to European markets, would Turkey think to exploit the Ukrainian crisis by selling agricultural and food products to Russia? And would the same thing also apply for visa restrictions, et cetera.