Will Iran finally call the marriage off wıth the Assad regime? 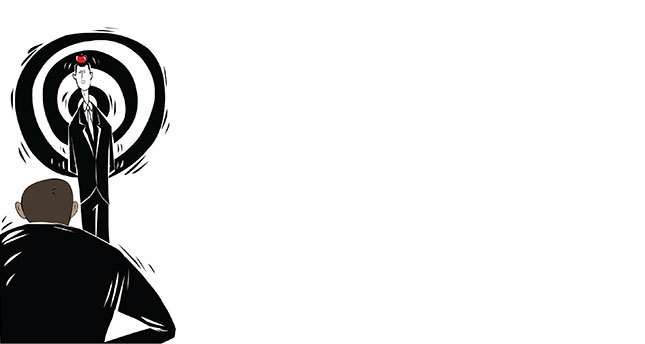 by Martin Jay Sep 15, 2014 12:00 am
Assad has played a very cool hand until now. Brilliantly, he ratified a chemical weapons agreement with Obama right at a critical point when the U.S. president was considering air strikes last year. He also masterfully used and abused ISIS militants to very efficiently attack and in some cases wipe out Free Syrian Army (FSA) opposition fighters, giving a real break to his own army, which was so useless on its own in the field that it had to rely on Hezbollah fighters shipped in last year to win its battles. Just recently, he even presented himself as an "ally" to the West when a few weeks ago President Obama was keen to hit ISIS on the ground but seemed unsure about who to get into bed with.

But then everything changed with the second beheading. And that old fashioned doctrine, which even dictators like Assad should heed, kicked in: politics rules. Is President Obama going to flush the credibility of his own party down the lavatory and go into the history books as the president who gave us jihadist beheadings, not to mention handing the republicans the Oval Office on a plate when a third American journalist has his head cut off by a British thug in a black cloak? Obama doesn't do suicide. The beheading focused his cloudy mind like "the hair of the dog" tends to steady a drunken fool battling with his office attire as he struggles to begin his day, when he is still drenched with the swill of the night before.

Obama has already written his own history books and given himself a glowing account. ISIS will be bombed in Syria because the crisis has reached a point where the risks now outweigh the realities staring us in the face. ISIS is spreading like Ebola ripping though the plastic sheets in a grimy West African hospital. Something needs to be done quickly and thoroughly to contain it.

But Obama always said that Assad is the problem. And doesn't the Syrian dictator know it? Assad now cannot be sleeping well as he has the mother of all nightmares to wrestle with and whichever way he turns, it's like he's in one of those primitive but effective hunting nooses: the more you struggle, the tighter the chord gets.

If he displays any signs of resistance at all to U.S. jets bombing ISIS positions in Syria it will be like signing a declaration of war; one which would be warmly welcomed by the Pentagon. They would have the perfect excuse to bomb Assad's bases, an opportunity which escaped them in August of last year when Assad, apparently, overstepped a red line and is believed to have used chemicals on an attack of dissidents in a Damascus suburb.

If he does nothing, then his political hold will rapidly drain away like the life fading from the eyes of a dying man. And not only from the thousands of Sunnis who are tired of war and have given up the battle in Homs, Hama and even Damascus but more importantly, his own people. His own elite can put up with the economy being on its knees for a while, but having the country reduced to rubble once Syria becomes a legitimate war zone, is not an option. I was told by people who were very close to him before the 2011 detention of school children – which kicked off the entire Syrian massacre – that his own political coterie will not accept a war zone type occupation of battle grounds like Homs, Hama and Aleppo indefinitely, even if the occupation is his own army. At some point the Sunnis have got be included in a new chapter of rebuilding the economy and being part of Syrian society.

So how could those same supporters accept something ten times worse? How could they accept foreign super powers bombing the hell out of what's left of the country? All credibility will collapse the first day a U.S. F-22 fighter jet bombs the country, regardless of whether it is specifically ISIS strongholds or regime barracks. Game over for Assad.

And believe me, the Iranians know it. Just this week, Tehran did a dramatic U-turn when the genie was let out of the bottle and Obama delivered his auspicious 9/11 speech. For those who bothered to look at the small print, it included: "arming and training the FSA to the teeth so it can kick the Assad regime while most of the world's media will be looking at the sensational news of ISIS corpses following U.S. air strikes. Iran is now backed into a corner which it really didn't want to be in, and just when U.S.-led negotiations with the West about its energy/nuclear capabilities were going more its way – well more so than Washington's. The key to securing a deal with Western countries was reducing its number of centrifuges in order to lift the crippling oil sanctions. If there ever was a test of the incredulous new relationship between Washington and Tehran, surely it is now, when Tehran has to bow out of the fight against ISIS – or at least the fight against ISIS in Syria.

But it's all up in the air. How does Iran conjure a win-win deal for itself now? This is all that matters. If it agrees to be part of a bombing campaign in Iraq but stops short at the border, only to turn around and return to Iran – knowing full well that the U.S. has to hit Assad as well – then how will the geopolitics play out? Who are the winners and losers?

Given Iran's immediate objectives – boost its own economy – and Assad's only real objective – stay in power indefinitely – are we about to reach a tipping point where these two ideologies collide? It is no secret that Iran's impatience in Syria is compounded by public opinion, which has been saying for a long time "Assad is our ally, but we can't back him indefinitely." So, there is a limit to Tehran's indulgence in Syria, even though it has helped militarily and financially. But now Tehran has more bills to pay, which is also due to its expenditure in Iraq as well.

Is it time now for Iran to cut its losses with Assad and invest in a new leader? One who can cooperate with the West in hunting down ISIS? Isn't this extremist ideology epidemic just too big and too dangerous to let fester just for the sake of keeping an uncharismatic and, frankly not very useful Arab dictator in place? The multi-billion dollar question will be whether Iran is looking at the region over a longer period and concluding that supporting Assad in a new war against both a strengthened FSA and U.S. air strikes is a price too much to bear.

Don't forget who picks up the tabs. Hezbollah, as much as it would like you to believe, is not the ideological movement you may think it is. Most of what it does is funded by Iran – everything from its comically amateur pro-Iranian two-bit TV stations, right through to proxy soldiers fighting in Syria to help Assad's regime win battles it couldn't manage on its own.

But lately, we are hearing a lot about how the Iranian's are tightening their belts. And being over-stretched in Syria with Hezbollah fighters from Lebanon is not a situation that the Shiite organization is happy about. Just last week an article in a respected Israeli daily broadsheet detailed how the Israeli army would go about destroying key Hezbollah military points, "when" it invades Lebanon, not "if. The beheading of both journalists was ghastly. But aside from the shock, it's important to note their nationalities including that of the third one threatened to be beheaded. All are from countries which refuse to cough up ransoms – the U.S. and the U.K.

The beheadings were a wart on the face of an otherwise habitually run business which has funded ISIS for a long time now. And the money always comes from France, Italy, Spain – and probably Germany. Hostage taking has made ISIS the lucrative business it is today and if the West continues to ignore the EU countries that are paying out, then the cycle of horrific violence is only guaranteed to continue endlessly. The beheadings were almost an effective reminder to France, Italy and Spain; "look, we really will do this, so take note next time it's your guy."

Ironically if the two journalists had been from continental Europe, they would have been spared, as their governments would have paid up. But it's that revenue stream which made ISIS in the first place, as it took its initiative from al-Qaida in the Islamic Magreb (AQIM) in North Africa and learnt that the quickest and most efficient way of financing yourself, is to kidnap Europeans.

It's worth noting that most foreign fighters that it attracts are paid. Some, like the British rapper who I will not glorify by naming, even bragged to his victims how he was going to retire to a Gulf State and live the high life.

Yet there is no way that ISIS could have predicted the political implications for both Prime Minister David Cameron and President Obama, who both don't have the luxury of sending tax payers' money to these appalling people. They only have the political option – even though most of the time most people in the West chose the wrong option when given the chance. A recent poll in the U.K. concluded that 80 percent of people said "yes" to bombing ISIS.

But it's still about the money and about leaders not being able to afford the political fallout. The difference for the Europeans tends to be that, in the case of President François Hollande for example, the foresight seems to be very short term. With the U.S. and U.K. governments, there tends to be a longer view. If you pay terrorists to do horrific killings, then paying them to save one, only guarantees that 10 will follow.

If we are to truly deal with the ISIS threat, then Obama needs to propose an international treaty which simply bans EU countries from paying out ISIS or other extremists groups. Just don't pay. But the shocking hypocrisy of Hollande has to be tackled head on. ISIS found its very foundations in the lucrative business of taking ransoms from EU governments.