Killing mosquitos rather than draining the swamp 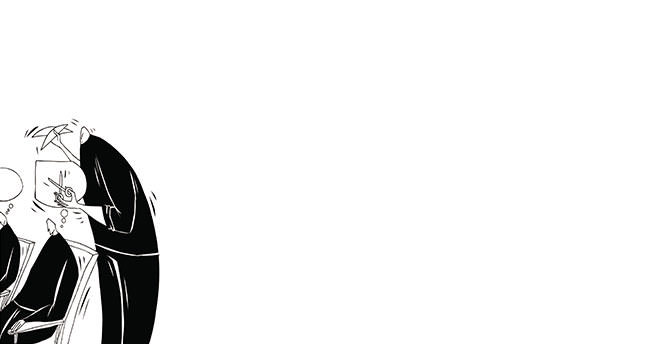 by Ergin Yaman Sep 16, 2014 12:00 am
Undemocratic powers across the world have always felt the need to have a chosen enemy to maintain their power or to help feed the perception that without their existence there will be chaos and things will get unbearably out of control. The existence of this chosen enemy can be organized or, very rarely, accidental. With this "lesser of two evils" strategy people are not allowed a third choice or way but are forced to choose between two unwanted options.

This is very much what is happening in the Middle East, which after a very rosy and hopeful Arab Spring has turned into a region of violence, instability and fear.Despite state terrorism inflicted on Syrians and Egyptians, their respective regimes have remained intact with no apparent consequences for their actions.

Due to a disunited approach by world powers, the brutal violence of the Syrian regime has been allowed to carry on for so long that it has spawned the barbaric Islamic State of Iraq and al-Sham (ISIS), which the world is now planning to target through a coalition backed by the undemocratic regimes of the region. One interesting nuance is that it is not the root of the problem of the undemocratic regimes themselves that have been chosen as a target, but the product of such a regime. It is, after all, these regimes that have caused the people of the Middle East grief and hardship and left the region almost destitute. We all know that the process that led to the formation of ISIS was fuelled by two significant issues: the first was and remains the Syrian regime that has refused defiantly to allow a democratic transition, killed hundreds of thousands and displaced millions of its citizens; the second is the failure of a timely response by world powers to tackle the atrocities carried out by the Syrian government. This has provided time and space for all sorts of enigmatic groups to emerge in Syria, ISIS among them.

There is great irony in the plan to tackle ISIS. World powers and Middle Eastern countries that supported the overthrow of democratically-elected Mohammed Morsi in Egypt, killing civilians in a brutal crackdown on the Muslim Brotherhood in the process, are now forming a coalition to attack an entity that sprung from the lack of action by the world against the atrocities of Bashar al-Assad's undemocratic regime in Syria.

Call it a planned outcome or a natural evolution, but the emphasis is no longer on the Syrian, Egyptian or other undemocratic regimes in the Middle East. The world is no longer talking about the American or European stance regarding the coup in Egypt. Even the war in Ukraine and its territorial rupture is no longer the number one agenda item for the world.

The focus is on the ISIS - the minds of people around the world are preoccupied with the brutal and barbaric beheadings and other atrocities committed by this entity. It is through ISIS's barbarism that we have been led to accept that the killings of Assad in Syria and Egyptian President Abdel-Fattah el-Sissi are less evil. Again it is through these barbaric killings that we are on the verge of accepting that the Middle East is better off with the current Syrian and Egyptian presidents. Most importantly, and perversely, it is through the ISIS killings that we are being persuaded that the whole Middle East will go the same way if democratic regimes like Morsi's are given a chance to govern. The world will stop questioning dictatorships around the region out of fears planted in their minds about ISIS spreading beyond Syria and Iraq. It is with regret that the focus is once again on killing mosquitos rather than draining the swamp due to the unimaginable and horrific atrocities of ISIS. It's a swamp that is generated by the undemocratic regimes of the Middle East and their international allies - a swamp that is supported by the Turkish opposition, which is hastily supporting Turkey's involvement in the operation against ISIS without looking fully at the context of events in the region over the past few years and understanding that as long as the swamp is fed by undemocratic regimes, entities such as ISIS will always emerge.

Turkey is trying not to call the Middle East a swamp and, of course, in essence it isn't. Due to power-obsessed dictators, however, its rich history, values and humanity are being lost in the swamp created by their oppressive regimes. The values of the region are now being distorted by the criminal activities of ISIS as they are broadcast across the globe. Does anyone else wonder how ISIS can operate in what is a war-torn area with death and destruction of infrastructure on a huge scale and yet still has access to all of the upto- date means to spread images of their barbarism via social media, inviting the hatred and opprobrium of the entire world?

Now world powers are determined to destroy this barbaric enemy. Turkey, which requested an immediate response from the U.N. and the international community to the crisis in Syria in the first place is being asked to take part in military action against ISIS, the identity and purpose of which still remain largely unknown.

The government in Ankara has been consistent over the past 10 years or so in opposing undemocratic regimes in the Middle East. As such, it will be interesting to see whether it will decide to take part in an alliance against ISIS that involves the authoritarian regimes of the region and which may serve the purpose of giving some legitimacy to the despots by tackling what is seen as the greater of two evils. However, if the U.S. and EU countries, which are democratic, are genuine in their efforts to get rid of entities such as ISIS, they need to support democracy and democratic movements in the Middle East. Similarly, they must take an honest stand against undemocratic regimes everywhere around the world, including the Middle East. Interests must take second place to democratic choices. The alternative is clearly not in the best interest of any country or humanity at large.