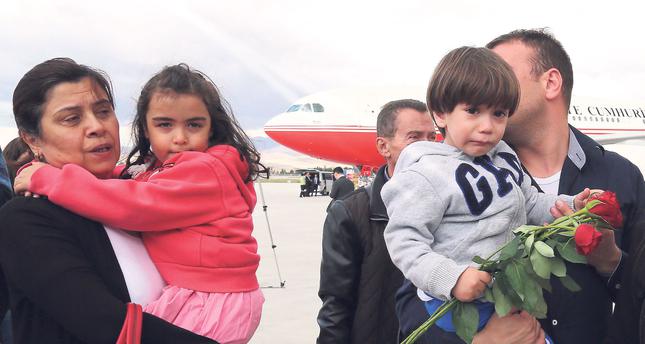 Forty-nine consulate officials were rescued in a successful operation, conducted by the Turkish Intelligence. The operation, which displayed serious forethought, and Turkey's general attitude towards refugees altogether reflect how sensitive Turkish government is about human life and dignity

Turkey freed and brought back to Turkey its 49 citizens who were taken hostage for 101 days by selfproclaimed Islamic State of Iraq and Sham (ISIS) militants, whom Turkey declared the most dangerous terrorist organization in the world and is preparing to take action against. No force was used during the rescue operation. Rather, this result was obtained thanks to intelligent diplomacy and intelligence efforts.

While a harsh campaign against ISIS is ongoing all over the world, Turkey gave prominence to rescuing its citizens held by ISIS instead of joining this campaign with an epic and pragmatic tone. An incorrect word or action might have endangered the lives of our citizens held by ISIS, which has a very different mindset and character than we are used to.

The sensibility Turkey showed in protecting the lives of its citizens is actually the most typical and symbolic manifestation of the concept of the New Turkey recently introduced by the Justice and Development Party (AK Party) government. Actually, Turkey has been grounding the resolution of the Kurdish issue on this principal level. There might also be opponents among its citizens, but even if they are opponents, their life and safety is above everything. Also suffering from labor accidents lately, Turkey has taken a series of precautions to prevent possible future accidents based on the same principle.

As a matter of fact, this principle is reminiscent of a famous remark of Osman Gazi' spiritual guide Edebali, who has an important role in Turk-Islam political tradition. "Keep humans alive to keep the state alive." According to this political perspective, a state is not only measured by its monopoly on the force it uses. What makes a state is this force's success in protecting the safety and lives of its own citizens. If a state cannot preserve its people and becomes a threat to the lives of its own citizens, then it would have no legitimacy.

Unfortunately, the Middle East is full of states that have lost their legitimacy in this sense since they pose a threat to the lives of their own citizens. We might see the difference more clearly when the nonchalance displayed by such countries to the lives of their citizens is considered.

Besides, Turkey also displays the same sensibility by giving asylum to everyone who has to escape from the region's various countries that have turned into an inferno for their citizens. Thus, Turkey places its humanitarian approach in a universal framework by also showing its responsible governmental vision to people from other countries and nationalities, as well.

Turkey's difference is also reflected in the attitude of its intelligence agencies in the same way.

While the intelligence services of neighboring countries declare their own people as enemies and try to set up a hostile intelligence order against them, Turkish intelligence, headed by Hakan Fidan, dedicates its own intellect and performance to protecting human life.

While making an effort to rescue the hostages held by the most complex organization seen in the region's history, Turkey was also busy providing help to other communities that were in a deadly trap set by the intelligence agencies of their countries. So, the old Turkey and regional actors' efforts to reflect national intelligence, as an aid to terrorist groups must be regarded from this perspective as they are used to old intelligence methods.

On the other hand, the number of those taking refuge in Turkey to escape from al-Assad's tyranny, which has continued for three-and-a-half years in Syria, has reached 1.5 million today. By maintaining an open-door policy, Turkey continues to provide humanitarian aid regardless of religion, sect or ethnicity.

Assad, who fights against his own people, does not recognize any measure of law or morality. The number of citizens who died in this unmeasured and disproportionate war has already exceeded 200,000. Unfortunately, the so-called international public only sees the lives lost as statistical figures and even refuses to regard Assad as a danger to humanity and mobilize against the man that is responsible for those casualties.

Likewise, it poses another danger as no humanitarian sensibility has been shown towards the coup regime in Egypt on the international agenda. General Sisi staged a military coup against the first democratically elected government in Egyptian history and massacred 3,000 Egyptian citizens in one day in a square, while they were staging a pacifist demonstration. A series of legal cases have so far been filed against the former president on false grounds. However, no case was filed concerning the 3,000 civilians murdered during the pacifist demonstration.

Some 3,000 citizens were killed in just one day, and this matter has not even been disputed in either Egypt or any other institution in the world. Today in Egypt, there is no civil domocracy; there is not the slightest respect for human rights, no freedom of thought and no dissident media organs. Instead, there are death penalties easily given upon first hearing on the grounds of false charges. Hundreds of people were sentenced to death in those informal and reckless cases. More than 40,000 people are still arbitrarily under arrest, while thousands of people are fleeing abroad as a last resort since they are dissident to the coup regime. But still, there is no reaction on the grounds of human rights and democratic concerns in Egypt, which is covered in crimes against humanity.

Of course, the Islamist opposition, which is completely blocked from the political sphere, is under incredible pressure, but still insists on remaining at a peaceful level despite all the incidents, does not surprise anyone. But headlines such as "Islam and Terrorism" are always ready to counter violence inevitably produced under such conditions in a sociological sense.

Meanwhile, the humanitarian sensibility shown in the face of ISIS is surprising. Immediate international action, which even suggests organizing a military operation, has been taken against ISIS. Surprisingly, the question of how and on which ground this organization could occur so rapidly has been neglected.

It has been ignored that ISIS emerged in an atmosphere where anger prevailed in the aftermath of the U.S. invasion of Iraq in which thousands of people were killed, and the Iraqi government was restructured in an unstable way. Saddam formed a Baathist regime based on Sunni minorities with the help of intelligence techniques. Maliki, who was assigned to the presidency under the supervision of the U.S. with a revenge mentality, tried to form a new Baathist regime based on Shiite groups. As a result, a blood feud began under U.S. supervision in which the Sunnis' turn came.

The Maliki regime, which the U.S. has seen as an ally for years, has had no other concerns than consuming the resources of Iraq. Governing required routinizing explosions that caused dozens of deaths everywhere. Each bomb also triggered hatred towards U.S. and UK policies that were supported the Maliki government.

Also ignored but pointed out by Turkey since the very beginning was the fact that the gap created by the postponement of a resolution in Syria would be filled with an atmosphere that would feed the most violent terrorist organizations.

This warning was repeatedly made: Approving of Maliki in Iraq, Assad in Syria and Sisi in Egypt could only result in provoking violence in the region because each of them only knows the techniques of oppressing politics through pressure and violence. They are the typical symbols of getting away from politics.

While all this was happening, some Western newspapers wrote that organizations such as ISIS were the outcome of the relative democratization that began with Arab Spring in the region. However, the truth is quite contrary. It is the outcome of the suppression of democratization attempts by coups and violence. Coups and dictatorships lead to terrorist organizations in the Middle East.

As the Western public adopts a potentially friendly attitude towards coups, they become the targets of the hatred triggered by the dictators. All these regimes are like swamps producing terrorist organizations. Dealing with the terrorist without draining the swamps would be useless and not bring any result. It would only cause an eternal and exhausting struggle against terrorists, paralyzing daily life. The social analysis of the emergence and development of ISIS can be conducted from this perspective.

Turkey, which is carrying the reconciliation process to a positive level through this vision, thinks that the international vision for fighting against ISIS is lacking. A fight motivated to take revenge on terrorists rather than terrorism only results in a vicious circle.