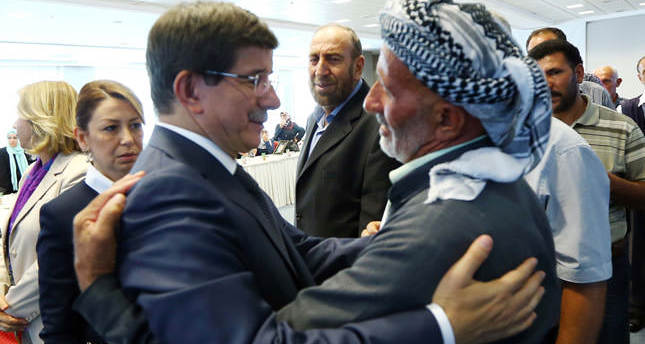 by Kurtuluş Tayiz Sep 23, 2014 12:00 am
It's hard to tell whether it was fortune or misfortune. When Ahmet Davutoğlu was appointed foreign minister, the foundations on which the Middle East was forged a hundred years ago were beginning to crumble and he had almost no experience in foreign affairs. The institution he inherited was rendered practically useless in spite of and because of its wealth of experience and the defining policies of the Cold War era had begun to lose their guiding features. There was a distinct lack of think tanks focusing on foreign affairs and there was no one who could give him guidance. On matters of foreign affairs, even the government preferred to defer to him and he neither took the easy way out nor did he choose the given options. He didn't view the traditional reflexes of the Foreign Ministry as a panacea but found his own path in the darkness. The "zero problems with neighbors" policy paved the way for an invigorated Foreign Ministry with dynamic policies to be introduced into the fold.

With the winds of change sweeping through the region, the bid to maintain and build closer ties with neighboring countries soon revealed itself to be a naive approach. A period of adjustment was required – after all it is not possible to find a new solution without trial and error. As much as this rings true for the government itself, it is also applicable to Davutoğlu post-2009 and his appointment as foreign minister. It was an advantage that he was not from within the bureaucracy, his coming to prominence as a status-quo defying member of the party and his avoidance of dominant local and foreign political inclinations gave Davutoğlu a clear advantage. His term as foreign minister coincided with an era of a mature and confident government and as a result, he was able to craft a new Ankara-centric foreign policy in which he surpassed all of the red lines of yesteryear. Taboos in foreign policy were broken during his era and Turkey moved beyond its pre-defined role in the region to a great domestic and international reactor.
Until recently, Turkey's regional role was limited to complimenting the security of Israel after Egypt. After War World II, Turkish foreign policy mostly remained under American control. Turkey became an extension of the West in the East. Naturally, this was not a mutually beneficial relationship for Turkey. This self-serving relationship, which put the interests of powerful nations first, prevented Turkey from industrialization, development and becoming a technological country. Turkey towed the line as a country dependent on support from the West. This state of affairs also defined the economic and political landscape. The system of tutelage based on military and bureaucratic powers' sovereignty over civilians was a reflection of the state's relation with the outer world.

As Turkey's internal power balances began to shift and the status quo was challenged, foreign relations began to deteriorate. The tutelage system began to be pushed back step by step, which affected foreign policy. Davutoğlu stopped looking at the world from the lens of Washington and Brussels but instead from that of Ankara. This new perspective was formed through ideological and political structures. Together with Erdoğan, he strove to create a new foreign policy vision. He overcame the bureaucratic perspective restricted by the Republic by reaching out to more enriching experiences of Islamic and Ottoman history. The Arab Spring, which imploded in Egypt and Syria, was a turning point for Turkish foreign policy. Borders once drawn with straightedges in the 19th century were redrawn in only a few short years. The Sykes-Picot Agreement that has defined the Middle East of today is experiencing tectonic shifts. This deep-rooted change was first detected by Davutoğlu. Iraq and Syria were fragmenting and the change was taking effect in the form of an ethnic and sectarian war.

The Middle East became a furnace. New organizations were formed during this time under the guise of saving nations. It would not be an exaggeration to say that for the first time in the history of Turkish foreign affairs, Turkey practiced an independent foreign policy. The Foreign Ministry, instead of trying to find a steady footing in the storm, adapted its pace and vision accordingly. Turkey was the first country to ignore the given borders and envision a new area. Undoubtedly, the Foreign Ministry was concerned about the U.S. and the West's reaction, but continued regardless even after being informed of their views.

Turkey's efforts to bring about a resolution to the conflict with the outlawed PKK, which formed in 1984, and end the Kurdish issue, coincided with a new Kurdish area being established in Syria after the one in Iraq. This is not a coincidence and was directly related to the developments in the region. Without the seismic changes within the region, the could not have been undertaken. The disarmament of the PKK and efforts toward a peace process would have naturally run their course domestically, but a long lasting solution can only be established with the vision of New Turkey. From 2011 onward, the Kurdish issue and the PKK were no longer domestic matters for Turkey but became intertwined in a wider regional strategy and policies. From that day onward Davutoğlu stood at the helm of foreign policy. The peace process, as a foreign policy maneuver, happened under his watch. The Turkish Foreign Ministry knows best how it is not possible to separate the Kurdish issue from the Middle East.

Even though Kurds are split across Iran, Iraq, Syria and Turkey, they retain the right to determine how they wish to be governed. Some 40 million Kurds live across these four countries. In Iraq, they have attained the level close to that of an independent state. They are governing autonomous regions in the north of Syria. The PKK and have long wanted autonomous rule in Turkey. Kurds in Iran want no less from Tehran either. The change in attitude by the Foreign Ministry toward Kurds from being seen as an enemy to now being viewed as a sister nation and strategic ally has allowed Turkey much needed breathing room. The Kurdish Regional Government (KRG) in Iraq has come under the wing of Turkey, which has also developed close ties with Kurds in Syria. Turkey is resolving the Kurdish issue on a democratic plane by sitting at the negotiating table with the PKK after 30 years of armed conflict.

As soon as Davutoğlu was appointed prime minister, he immediately took ownership of the peace process in all aspects – coordination and repeated messages acknowledging the urgency for a successful resolution indicate he is fully aware of the realities of the current state of foreign affairs.

Turkey has a real opportunity with Davutoğlu at the helm of the peace process as someone who understood the deep-rooted changes that are occurring in the Middle East. The division of portfolios among the cabinet is indicative of the level of gravity the government attaches to this particular issue. The Turkish Republic's biggest and most engrained problem is the Kurdish issue and it is the key for the new Turkey. The Kurdish issue also renders the new Turkey authentic.

The vision of a new Turkey, presented and developed by Erdoğan, takes the first Parliament from the 1920s as a reference point. Kurds had the right to ethnic and political self-representation in Parliament during the first years of the Republic. In later years, as can be seen in other examples of nation-states that do not accommodate plurality, their representation was lost. Whereas the first Parliament foresaw that Kurds would indeed self-govern Kurdish lands. As much as Erdoğan's government has ended policies of denial and assimilation, a vision for resolution, until recently, had not been developed.

The revolution that started in Syria in 2011 has morphed beyond all recognition and affected Turkey's internal power balances and it is this context that gave birth to the previously missing vision of a solution for the Kurdish issue. The first Parliament and the Amasya Circular, known as Turkey's first constitution, are the reference points for this vision and given the new conditions and power balances it looks as though the vision will become a reality soon. The creator of the vision is Erdoğan and Davutoğlu is in the driver's seat. After Erdoğan, Davutoğlu is most knowledgeable of and capable concerning the Kurdish issue, which is entering its second year and is expected to reach a new level. In his first meeting with his new cabinet, Ahmet Davutoğlu made the following statement regarding the peace process: "We must take swift action to prevent the peace process from being influenced by domestic and international fires."

The conflict that has spread to the entire region from Syria and Iraq, Turkey stands, a model of peace, stability and a new vision that will guide the peace process in the face of death and destruction. Turkey has produced, as the international community will acknowledge, the most democratic model regarding the peace process. As Davutoğlu described it: "There is only one success story in the Middle East today and that is the peace process. We are the only political power that is claiming to build a new country and that is reconciled with all elements of society from across the region. Had the likes of Egypt, Syria, Libya and Iraq been as democratic and engaged in internalizing policies as us, they would not be in the situations they find themselves in today."

The public overwhelmingly trusts Davutoğlu after Erdoğan. He is not someone who will jeopardize this trust. According to Davutoğlu, the peace process has already reached half way and is past the point of no return. Davutoğlu recently summarized the road map to be followed and the degree of determination to do so: "It is time to act now, the process including disarmament to end terrorism and finalizing social integration in order for the final goals to be realized, needs to be started." This determination is evident on both sides. As a result, the negotiations are proof of the determination for progress. What is more for the general public, the peace process has become a matter of assurance as it is hyper sensitive on the issue of the peace process.