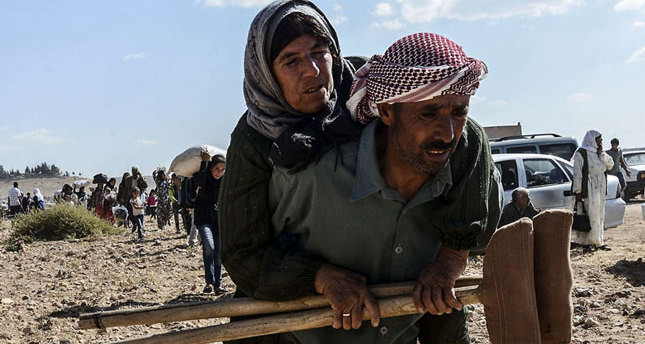 by Rahman Dağ Sep 25, 2014 12:00 am
There is an argument that Turkey covertly assists the Islamic State of Iraq and al-Sham (ISIS) to fight against the Democratic Union Party (PYD) and Kurdish areas in Syria and also seeks to convince the international community to form a buffer-zone along the Turkey-Syria border so that all gains of the PYD and Kurds could be demolished.

The above argument belongs to pro-Kurdish agencies one way or another related to the PKK. It is reasonable from their perspective as they still think that Turkey is anti-Kurdish and will not allow any Kurdish gains at any cost. That means the Kurdistan Communities Union (KCK), Democratic Regions Party (DBP) and PYD are under the influence of an ideological approach to the issues since the conditions in Kobani resemble those of the Battle of Stalingrad. In addition, they have a perception that the Justice and Development Party (AK Party) and ISIS are more or less the same in terms of Islamic ideology, which emanates from a fanatic obsession toward Islam.

With that understanding, Murat Karayılan, head of the KCK council said, "There is no such thing as the peace process - even if it is finished." By saying that, he sacrificed the peace process for Kobani, which is perceived as a solid result of the revolutionary Kurdish nationalist movement. That is more than enough.

First of all, the Islamic ideology of the AK Party is totally different from ISIS's interpretation of Islam. The former has tried to form a so-called democracy consistent with democracy to provide legitimacy for its existence. Therefore, ISIS and al-Qaeda are like dynamite threatening the AK Party's political ontology and the religiously influenced democratic values that it has tried to promote across the Middle East, which has been defined as conservative democracy. The reason why pro-Kurdish movements still lack the capacity to understand the difference is coming from an Islamophobic ideological approach.

In the early stage of the Syrian civil war, Turkey overly and covertly supported opposition groups, including every atomized Islamic group fighting against the Bashar al-Assad regime. The question here is if the PYD ever fought against Assad's forces or are they just taking advantage of the situation through not fighting against Assad, which would be driven by an ethno-centric and opportunistic policy. Kurds in Syria have suffered severe suppression. But, forming its autonomous region and waiting for other states to accept these administrative units within such a conflict zone can only be explained as an ethnic policy. It is to say that, except the PKK, KCK and related groups, there is no recognized legitimacy of their authority in their region not only by Turkey, but also by all sovereign states and also by Syrian opposition groups.

Also to consider a buffer-zone as a menace to the gains of the PYD and the three Kurdish-controlled regions is also meaningless. Whoever or whatever authority comes to power in Syria after the current regime, the newly formed Kurdish regions are going to be subjected to new debate in order to gain legitimacy from a future Syrian authority. In light of this undeniable reality, it is not the buffer-zone that Turkey is demanding the U.N. set up that should be taken into consideration, but the post-Assad process.

The possible buffer-zone is, in practice, beneficial both for Turkey and the PYD as Turkey could reduce socio-economic costs and security risks and the PYD could find a social base from which it could gain legitimacy not originating from a military force, but rather from a socio-political method. However, the KCK and PYD are now afraid of losing their newly gained regions and political authority, rather than taking the path of sustainability and preparing for a post-Assad era. These are two responses to Krayılan's argument. I wrote, "That is more than enough," because Karayılan linked Turkey's alleged support of ISIS with the peace process in Turkey. It might be because of the shocking attack by ISIS militants on Kobani just after the 49 hostages from the Turkish Consulate in Mosul, Iraq, were released by ISIS.

The most striking point here is that while he is talking about Kurdish rights, Turkey is willingly accepting Kurdish refugees escaping from the indiscriminate violence in Kobani and adjacent villages despite the fact that Turkey is fully aware of the humanitarian costs of more than 140,000 refugees crossing into Turkey. Such a humanitarian tragedy should serve to accelerate the peace process in Turkey, as the coming refugees are Kurdish and Turkey continuously keeps the border open for them. Furthermore, Turkey has stressed the oppression of the Assad regime since 2003, suggested that Assad conduct reforms in favor of Kurds and also stood against the suppression of the opposition including Kurdish groups. Moreover, while most of the international community has been silent over Assad's bombings of his own people, Turkey has been against such actions at the cost of alienating itself in the Syrian conflict. This has not only happened in Syria, but also in Iraq by Ankara opposing former Prime Minister Nouri al-Maliki's sectarian policies. Turkey warned the international community about the severely negative results of such policies as well as supporting the Kurdistan Regional Government (KRG), maybe out of economic interest and maybe not.

In short, Turkey has gradually freed itself from its anti-Kurdish policies in the Middle East, yet the PKK, KCK and PYD have not freed themselves from their ideological anti-Turkey approach to Islamic groups by putting all of them into one category, which is fascist. I am personally in favor of the peace process as a Kurd and believe that people are guaranteed the process regardless of what benefit the AK Party and the PKK are expecting to gain for themselves. Therefore, the misperception of the issues in the region because of a strict ethno-centric and ideological approach might cause the deconstruction of what the PKK has gained up until now unless it promotes the peace process in Turkey. Eventually, instead of saying such a negative phrase about the peace process, it is better for them to look for any possible cooperation in the refugee issue by taking a humanitarian and brotherly perspective.

In the same statement, he also mentioned the position of Abdullah Öcalan as the leader of the movement. What made Karayılan say that the peace process is finished? And how did he perceive Öcalan's call for Kurds to be at total war? Finally, I don't think he is aware that the only way to consolidate the gains of the Kurdish nationalist movement in Syria is to go through the gains obtained at the end of the peace process in Turkey.

I would like to mention Sırrı Sakık's public speech in which he more or less argued that if the PKK and KCK impede the peace process, he would seize their necks and push them to the table. I do not know his stance on Karayılan's statement or Turkey's allegedly assistance to ISIS in order to destroy Kurdish gains, but in my point of view, the statement requires him to take action since he personally threatened to halt the peace process, while People's Democratic Party (HDP) members of Parliament are just today visiting Deputy Prime Minister Yalçın Akdoğan.

That is more than enough. Kurds do not deserve such a political atmosphere and inhuman oppression regardless of whether it is coming from Assad, Turkey, ISIS, Iraq or their own organizations. When they are under threat of being killed, it is time to act together to save them.