Confusion among voters: Results of the election in Sweden 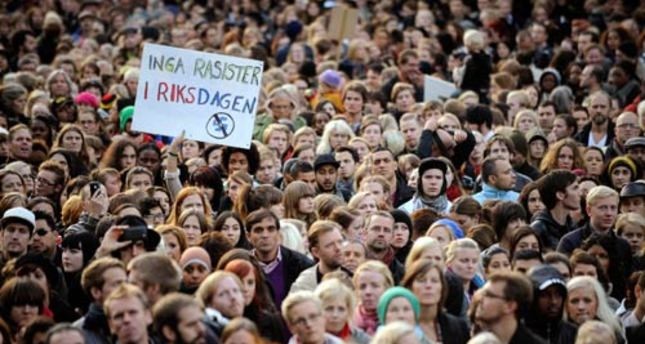 by Zeyneb Hafsa Aström Sep 26, 2014 12:00 am
I have always been amazed how two people can look at the same thing but see it totally differently. My amazement increases further if the thing which is looked at is a rather objective thing like a statistical result. This happens because people have different backgrounds, different points of view or simply different suppositions. These were my first impressions after the elections that were held on Sept. 14 in Sweden where election-related numbers and figures were perceived and interpreted in a different way by different people. Yet, there is no such thing as "ultimate relativity," meaning that it is always possible to find a solid ground for everyone to stand on at once.

Let's first start with the solid, common grounds of the election results. The 8-year-long Alliance government - including the liberal conservative Moderate Party (MP), Liberal People's Party (FP), center-right Center Party (CP) and Christian Democrats (KD) - ended with the elections. Even though it was not clear before the elections which parties the Social Democratic Party (SPD) would ally with, the results of the parties including the SD, Left Party (VP) and environmentalist Green Party (MP) were announced together under the title of Red-Greens, meaning red leftists and green environmentalists. The Red-Greens received 43 percent of the vote and the Alliance received 39 percent. The party that was expected to enter parliament and to support the Red-Greens was the Feminist Initiative (FI), but their vote rate was only 3 percent, which was not enough to pass the 4 percent threshold. Another important question was which party would be the third biggest party. After the MP and SP, which received 23 percent and 31 percent of the vote respectively, the Swedish Democrats (SD) became the third biggest party with 13 percent. The overall turnout for the elections was 83 percent.

These election results say the following common things to people. First, there was a shift toward left; second, there is the possibility that the government will be a minority government and third, the party that gained most from the election was the SD with more than a 7 percent increase in their votes since 2010. In terms of more relative opinions, I think that the shift toward the SD can be attributed to something that I call the "Hollande effect." As the leader of the Socialist Party in France, Hollande made many promises depending on social solidarity before the election and he actually managed to take the lead from the right wing party of Nicolas Sarkozy. In the same manner, the party leader of the SD, Stefan Löfven, also made many promises from education to health care, the environment and equality based on solidarity. Only time will tell the outcome of these promises.

The election results marked the failure of polls since the MP was expected to compete with SPD to be the third biggest party, the FI was expected to enter parliament and the SPD was not expected to get as many votes as they did. It is true that polls are only forecasting and their validity can especially be affected by the quality of the methods used and how the methods are applied. In this case, the failure in polls can easily be attributed to some other factors. For instance, the MP and FI had more of an opportunity to be represented and advertised on the media while the SPD had either no or a negative image in that regard. Such images affect people's ideas in theory, but not necessarily in practice. Thus, it was no surprise that the MP and FI were overestimated and the SPD was underestimated.

In connection to the point related to the image of SPD, the word to be used is "presupposition." It has been presupposed that the SPD is a racist fascist party and everyone who votes for them is automatically racist. It is difficult here to go into detail about the history of this party, but we can briefly say that it was built upon different divisions and mergers of different parties throughout the second half of the 20th century and during this process it tried to be apart more and more from extreme right-wing elements. Up to what point such an attempt has succeeded needs detailed analysis, but what seems problematic is the blocking and crowding out effect of the presupposition mentioned above. Because, in this way, the party cannot openly say or discuss what they really want and neither can the people who voted for them admit it. As someone correctly put it, 13 percent of the electorate voted for the party but no one knows who they are because no one dares admit it. This is a serious problem in terms of democracy.

The thing that is creating tension in the politics of the SPD and the other parties is basically the issue of immigration. First, according to official statistics, the amount of immigrants in Sweden increased from 20,000 to 100,000 per year between 1960 and 2012. A study conducted by Timothy and Williamson shows that between 1982 and 2001 Sweden was the second top country in terms of accepting asylum seekers per capita among 20 European and North American countries. Today, around 15 percent of the Swedish population was born outside of the country and these people are from more than 200 different countries. Despite the dimensions of immigration, there have not been any serious or fruitful discussions regarding how the experience of immigrants or Swedish people has been, like what the challenges have been and what possible future challenges are.

Instead of following a more rational strategy on this issue, all attempts at a discussion have been stopped by emotional and populist comments. Multiculturalism, called "a make-believe project" by Swedish journalist and writer Nathan Shachar, has different reflections on society. No matter how calm and nice Swedish society is in general - whether or not such properties are genuine or depend on a sense of mission is another issue - there is a limit of being neglected. Many people want to hear a long-term plan about how the expected wave of immigration will be financed, where these people will be settled and so on and so forth. To ask such questions do not make people less humane. The answers like "we will deal with everything in solidarity" are not real answers, but a mere hope or wish. I am afraid that if these and similar questions are neglected, more and more people will be disturbed by the gap between the project of multiculturalism among elites and how it is actually experienced in reality.

While I am writing these sentences there is no more Rödgröna because Löfven announced that they are not planning to make a coalition with the V. Currently, he is trying to establish a new government and many wild combinations of parties have been mentioned. We will see how this ends. All in all, it can be said that the results of the election showed before anything else how confused Swedish voters are since they voted so widely and it will be very difficult to establish a majority government.