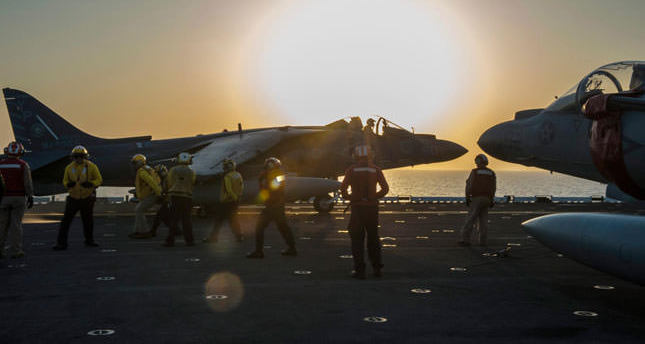 by S.Sayyid Sep 27, 2014 12:00 am
As President Obama announces another "coalition of the willing" to bomb areas of Iraq and Syria, one cannot help but be reminded of one definition of madness: doing the same thing again and again and expecting a different result. Of course, unlike many previous American presidents, it is hard to imagine that Obama is mad. Even when he promotes his new strategy of "degrading and ultimately destroying" ISIS with references to American successes in defeating violent Islamists in Somalia and Yemen, one overlooks such delusional statements as the currency of contemporary statecraft. We know that, on occasions, politicians have to exaggerate the truth and claim successes where there were defeats. They have to put on a brave face and say their plan is going to work. However, generally, we know that they know that things are not as they say they are. The trouble we face when we encounter the current U.S. government's statecraft is that we can no longer be sure that they are able to make a distinction between their view of the world and the way the world is. In case people are not convinced that these delusions are not solely Obama's, we also have statements by John Kerry in the sense that Egypt has an important role to play in defeating ISIS. By all accounts, both Obama and Kerry are intelligent and serious men; both have, unlike the previous incumbent of the White House, travelled outside the United States before taking office. Therefore, it becomes more perplexing that they believe more bombing, more colluding with regimes that lack legitimacy, a greater assumption the "white man's burden" will actually lead to better results.

When Obama became president there was hope among many people outside the West that his non-European upbringing; the time he spent in places like Indonesia; his Kenyan heritage, and even the fact that his middle name is Hussein, would make him a president at peace with the world and its diversity. The signs are that this reading of Obama was overtly hopeful. The clearest indication was the much heralded speech to the Muslim world which he gave at Cairo University in 2009. In this speech, broadcasted and translated around the world, Obama sought to reset the relations between the U.S. and the Muslim world - a new beginning "based upon the truth that America and Islam are not exclusive, and need not be in competition," with the aim of eradicating "years of mistrust," thus raising expectations of a real change in American foreign policy towards the region. The irony that such a speech was being made from Mubarak's Egypt - and in turn implicitly endorsing the regime - was not totally lost on many Muslims around the world. The madness of America is not the madness of its leaders, but a structural problem - a fault in the imperial formation.

In Europe, the United States was able to build its ideological hegemony in its antagonism towards the Soviet Union. The idea of America as a global liberator was founded on the anti-communist premises of the Cold War and its construction as the guardian of a free Europe. It did this by deploying its "soft power," which appeared to give shape to the hopes of the people of Europe who had suffered devastating war and tyranny. Alas, the experience of American power outside Europe - in Latin America, in South East Asia, and of course, in Muslim lands - has not been so benign. The United States has repeatedly and consistently opposed the people's quest for autonomy. It has preferred to work with authoritarian regimes that depend on support from Washington rather than from their own citizens. The roots of ISIS are not so much found in Islam, but rather U.S. policies which continue to support client dictatorships as opposed to sovereign regimes with popular legitimacy (for example, HAMAS, Iran and Mohammad Morsi's Egypt). In this sense, U.S. policies contribute to the failure of the U.S.'s own stated objectives of advancing freedom and democracy. As a result, within the current paradigm, the repertoire of American policy options outside Europe - and in particular in the Middle East - shrinks further and further.

In his televised address on American policy towards ISIS earlier this month, Obama stated what he believed the U.S. is about, "We stand with people who fight for their own freedom and we rally other nations on behalf of our common security and common humanity." His plan to reboot American leadership in the region promises destruction and never-ending interventions - a virtual Central-Americanization of the region involving a mix of military and/or political interventions to force regime change, submissiveness and paternalism. In other words, a space where the exercise of American military and political might helps to safeguard its manifest destiny.

The problem that American statecraft confronts now is how to produce order - an order the U.S. favors - in the post-Ottoman Middle East. The struggle with this problem precedes American hegemony. Throughout the last century there has been a series of other strategies aiming to tackle this issue. The direct colonial rule by France and Britain following World War I floundered when both countries, exhausted after fighting world wars, faced an increasing anti-colonial resistance. Following World War II, they were forced to withdraw from most of the regions that had been under their control which resulted in the emergence of Muslim states. The second phase was characterized by rule through regional powers (Pahlavi Iran, Israel, 'old' Turkey, Saudi Arabia), which secreted and disseminated colonial mentalities through their policies and ideologies. This strategy collapsed in the face of the upheavals brought about by the Islamic Revolution in Iran. The revolution not only toppled one of the key regional pillars, but it also challenged the imagination of Western ideological dominance with the articulation of an anti-colonial Islam able to govern as a sovereign modern entity. Iran was no longer a client state, but furthermore, it brought about a new vision of political Islam which interrupted the continuity of colonialism. The third phase was a response to the revolution in Iran and the Soviet invasion of Afghanistan. This consisted of U.S. forward deployment in the region in the hope that the fear of an American intervention would allow the U.S. to balance out the threats to its clients and its interests in the region. The formation of U.S. Central Command (CENTCOM) in 1983, the handling of American national security interests across South-west Asia, Central Asia and the Persian Gulf, signaled this shift in American regional strategy. This was the era of clandestine American military interventions which allowed the U.S. to support Iraq and degrade Iran's potential . This period came to an end as American support, despite the atrocities of Saddam Hussein, emboldened the Iraqi leader to invade Kuwait - an invasion that could only be checked by using direct American military intervention. This fourth attempt to regulate and discipline the post-Ottoman Middle East helped to radicalize members of some Islamic groups such as al-Qaida who saw in the American intervention support for an illegitimate system of rulers. Al-Qaeda understood that, despite being a distant enemy, America was the actual source of strength of the local tyrants and despots. The attack on New York and Washington ended this fourth strategy. It was in the aftermath of 9/11 that the fifth strategy - the "war on terror" - was launched, which meant American power would not simply intervene in a punitive manner but rather, it would be used to reconstruct the region and change its societies so that they would become complicit with American interests. This meant a strategy of re-colonization. Iraq and Afghanistan were occupied and were to be shaped according to Western rules and interests. This was the plan for another American century .

Due to its direct involvement, the U.S. could not help but be sucked into a range of anti-colonial struggles in which it is currently involved. Whatever happens in the region, it now means the U.S. must be pulled into it. For Washington, the costs of occupation and of ascertaining control are rising both financially and politically, while the scope for alternatives is getting gradually smaller and smaller. Thus, American statecraft in the region is spiraling down in ever decreasing circles, unable to promote peace or prosperity let alone provide justice or freedom.