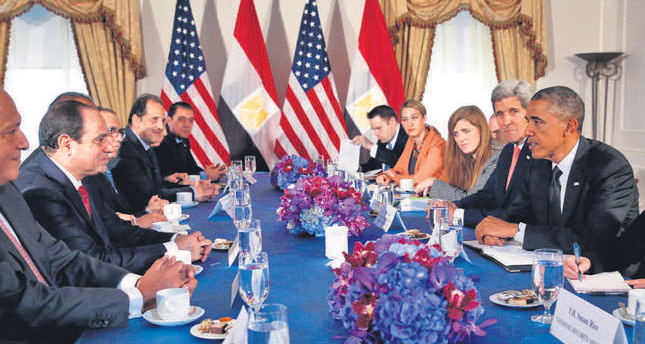 by Dr. Hatem Bazian Oct 03, 2014 12:00 am
Waldorf Astoria in New York has been the seen for many conferences, parties, weddings and memorable film shots, however, September 25th, 2014 at the hotel will be remembered for President Obama's administration public embrace of Abdul Fattah al-Sisi, the newly "elected" president of Egypt. The United Nations' General Assembly 69th session in New York served as a perfect foil for President Obama and key US leaders to begin the public and diplomatic cuddle of Abdul Fattah al-Sisi and affirming the long-standing relationship and vital American and I would say Israeli interests in Egypt.

In welcoming al-Sisi to the US, President Obama described Egypt as a "cornerstone of our security policy and … policy in the Middle East" while the meeting was deemed as "first opportunity" for a "face-to-face" encounter "to discuss a wide range of issues -- everything from the Palestinian-Israeli situation in Gaza, to Libya, to the issues of ISIL, Iraq and Syria." Absent from the list of issues discussed at the meeting are al-Sisi's atrocious human rights record, gulag type prisons and the massive oppressive structure set in place since the July 2013 Coup with a minor request for the release of Al-Jazeera's journalists.

President Obama's embrace of al-Sisi comes on the heels of earlier meetings with Secretary of State John Kerry, Bill and Hilary Clinton as well as former U.S. Secretaries of State Henry Kissinger and Madeleine Albright. Taking altogether, the meetings are intended to rehabilitate al-Sisi's image and begin a new process that can recentralize Egypt's role within current US foreign policy and Middle East regional interests. Certainly, reality is the theater of the absurd when it comes to politics since the "price is worth it" former secretary Madeleine Abright and Kissinger's corroborated responsibility in a series of war crimes in Indochina, Bangladesh, Chile, Cyprus and East Timor are themselves needing image rehabilitation but don't hold your breath waiting for any serious investigations on this front. Al-Sisi in NY is meeting the right people and in terms of death and atrocities, indeed, would be considered a rookie in an all pro-league.

In addition to the meetings, the Washington Institute, a US think tank closely associated with Israeli interests, issued a policy alert titled, President Obama Should Meet with Sisi, and specifically calling on the President "to get one policy issue right -- and at a very low price", and to publically embrace the Egyptian president as a matter of urgent strategy. The Egyptian's presidential team in NY likewise set-up meetings with the Chairman of the World Economic Forum Klaus Schwab and a number of key business leaders in the hope of kick-starting the country's dead economy.

While meetings with US and world leaders' were important; however just as critical has been a media strategy situating al-Sisi as the bulwark in the region for the fight against ISIS and terrorism in general. Published as "a first interview with a foreign media," the Associated Press had a long interview with al-Sisi published on September 21st, 2014, days before the UN General Assembly session and intended to preempt any possible negative coverage during the visit.

The media rehabilitation strategy is evident in Bryan Walsh's Time Magazine interview using the passive voice in reference to al-Sisi's human rights record and political repression.The Time's article fails to mention the names of imprisoned Al-Jazeera journalists, 25,000 political prisoners and over 1000 protestors murdered in a single day and obliquely stating that al-Sisi "been criticized for his crackdowns." What about Time magazine's ethical concerns and can we have direct and active voice criticism of al-Sisi based on facts and human rights record!

"Al-Sisi Ascendant" was the celebratory title in the September 20th edition of the Economist appearing on supposedly "the general" first 100 days" in office but adding "at the cost of political freedom," to the caption. The article is tour de force celebrating al-Sisi economic and investment plans calling it "some good first steps," and offering praise for "tackling ruinously large energy subsidies."

In retrospect, the US and European campaign to embrace al-Sisi has been underway for quite sometime and can be dated to the pre Coup period and for sure afterward. Immediately after the military Coup, American and European leaders and diplomats while expressing rhetorical support for democracy, nevertheless moved swiftly to engage al-Sisi, the Coup plotters and the generals.

From Egypt's side, the current American embrace has specific military interests and a call for a delivery of aircrafts in exchange for participation in the global campaign against ISIS in Iraq and Syria. "Give us the Apaches and F-16s that you have been suspending for over a year and a half now," was al-Sisi response when approached for Egyptian participation in the US led campaign against ISIS. Considering the heavy and long term dependence of Egypt on US military supplies and technical support, the current opening for al-Sisi and his generals to acquire badly needed death machines is at the heart of this strategic public embrace which for sure will be followed by a concerted lobbying effort.

A concerted walkout should have been the response at the UN General Assembly when al-Sisi strode triumphantly to the podium to address the world while blood dripping from his hands and thousands of prisoners anguish in darkened dungeons. What we expected is unequivocal calls for the release of president Morsi, freeing all political prisoners, clear and unambiguous press freedom, open democratic process and more critically removing the military from any role in politics and economy.

Human Rights Watch report, All According to Plan: The Rab'a Massacre and Mass Killings of Protesters in Egypt, should have been front and center at the UN General Assembly. Kenneth Roth, the executive director of Human Rights Watch, correctly observed that "in Rab'a Square, Egyptian security forces carried out one of the world's largest killings of demonstrators in a single day in recent history" and that it "was a violent crackdown planned at the highest levels of the Egyptian government." Giving al-Sisi a pass at UN on the Rab'a massacre and mass killings serves to undermine the world moral and ethical values while emboldening the end justify the means paradigm.

American and European leaders' have made double standards and hypocritical foreign policy a customary practice and embracing al-Sisi into the war crimes, torture, prison and military industrial complexes, and not to forget drones country club is a norm rather than an exception. The next time a US and European delegation comes to the Middle East lecturing about democracy, human rights and "civilized" norms a picture of al-Sisi with President Obama should be presented in response. Universal human rights, freedom and dignity are not the exclusive dominion of one group or region; rather a global standard should apply to all regardless of immediate political expediency. Egyptian blood is worthy of attention, value and concern: a profound stain is on all who celebrated al-Sisi's image crafting tour in the US and UN but least we forget he is welcomed among friends, equals and partners!
Last Update: Mar 28, 2017 4:38 pm
RELATED TOPICS