Opportunism and the disease of pragmatism 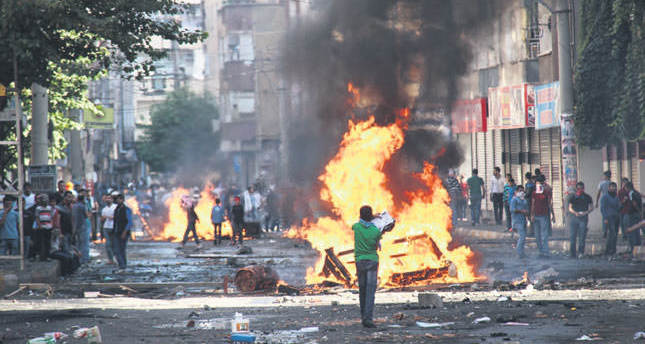 by Yunus Akbaba Oct 09, 2014 12:00 am
The Islamic State of Iraq and al-Sham (ISIS), as the most serious threat to the Middle East's established order, has begun to escalate its control of the region despite the U.S.-led international coalition's airstrikes. ISIS's latest attack is targeting the city of Kobani - Ayn al-Arab in Arabic - where the PKK-affiliated Democratic Union Party (PYD) has held control for two years. The city has been under siege for three weeks and, apparently, ISIS seems very close to overtaking the city. This advance triggered another development in Turkey. Immediately after ISIS began attacking Kobani, PKK leaders and the pro-Kurdish opposition Peoples' Democratic Party (HDP) started to accuse the Justice and Development Party (AK Party) government of backing ISIS. When it was understood that it was no longer possible to hold the city, the HDP and PKK demanded their supporters to turn each city to Kobani in Turkey. The leader of the PKK's People's Protection Forces (HPG), Murat Karayılan, said, "If Kobani is in the firing line, our people in Turkey must be hard in the way of feeling the fire. They must take a risk." The ongoing reconciliation process in which the government is negotiating with PKK leader Abdullah Öcalan while he is serving a life sentence in prison and the HDP in good faith seems to be in danger. After severe clashes with police, five citizens died and the government declared curfew in the five biggest cities in the Kurdish region including Diyarbakır and Mardin.

The way of ISIS to Kobani

The very dynamics that gave birth to ISIS and its rise are still present in the region. After 2003, U.S. policy over a decade caused a sharp ethnic (Arab-Kurdish) and sectarian (Sunni-Shiite) polarization. The former Prime Minister Nouri al-Maliki's Shiite-dominated government in Iraq marginalized the Sunni bloc and ISIS benefited from this power vacuum first in Syria and then in Iraq. In this regard, ISIS should be considered as the outcome of the aggression committed by the Iranian-backed sectarian Iraqi government. When the central governments in both Iraq and Syria weakened, ISIS cooperated with local Sunni tribes and increased its influence at a terrifying speed.

One of the main strategies of this organization is to capture territories where there is a power vacuum. They first showed themselves in northern Syria and started their infamous march by invading Iraqi cities one by one. Although they attempted to reach Baghdad, a serious confrontation from Shiite militias stopped them. Then they changed their direction and started to march over Kurdish territories in Iraq and Syria. When ISIS advanced very close to Irbil, the capital of the Iraqi Kurdistan Regional Government (KRG), U.S. airstrikes stopped their advance. Finally, ISIS determined Kobani as the new target in northern Syria in order to maintain their supremacy in the region. Although ISIS was considered one of the groups fighting with the Syrian regime forces, there is not much evidence proving that the group fought against President Bashar Assad. Rather, they concentrated to impose their dominance in the territories they captured or aim to capture. In this regard, it has to be answered why ISIS has been attacking the city of Kobani.

Strategically, ISIS seized the geographical area between Iraqi Kurdistan and the Syrian Kurdish region in order to prevent the KRG's possible military and humanitarian assistance for Syrian Kurds. Also, the People's Protection Units (YPG), the military arm of the PYD, signed a cooperation agreement with the Free Syrian Army (FSA) in March 2014 and even held joint operations against regime forces in Aleppo. Turkey had started to push the PYD to increase the level of this coalition as well. ISIS realized the potential danger and intended to deplete this coalition before it turned out to be a threat to them. Kobani, located in the middle of the three Syrian Kurdish cantons that were declared by the PYD in 2013, serves as a bridge between the two cantons. ISIS taking Kobani would break the link between the other two cantons. In other words, it is strategically very important for ISIS in order to suppress the PYD in the region and it is an unbearable situation for the PYD since it would be the loss of their gains of the past three years in a very short time.

PYD: From short-lived autonomy to survival

The PYD benefited from the withdrawal of regime forces from Kobani and established an autonomous rule. Refusing to be part of the fight between regime forces and the opposition, the PYD escalated its control in the area through eliminating other Kurdish political parties in northern Syria. They did not take part in the Kurdish National Council, led by KRG President Masoud Barzani. Having become the sole power in the region, they started to act as the representative of Kurds and remained silent to Assad's cruelty in Syria. There is severe criticism of the PYD due to their close ties with the regime. Although PYD representatives deny those claims, the recent situation in the city of Qamishlo shows the relation quite clearly. After Syrian government forces withdrew from northern cities in 2012 and the PYD declared the autonomous cantons in 2013, its main agenda was to seek international recognition. However, their close ties with the PKK, which is on the terrorist lists of many Western countries, and their unnamed relation with the Syrian regime wasted those attempts.

When ISIS commenced the recent attack on Kobani, the PYD requested military support from Western powers, including Turkey, to prevent a possible massacre by ISIS in Kobani. The PYD insistently rejected a foreign military intervention. It created serious doubts whether it prioritizes the lives of Kurds or the status of the PYD. Nevertheless, both Western powers and Turkey contacted with PYD Chairman Salih Muslim and tried to convince the PYD to distance itself from the Syrian regime, to join the FSA and to cooperate with other Kurdish parties. The PYD appears to accept the fight against the Assad regime, but they have no eagerness to share their short-lived sovereignty with other Kurdish actors. This particular stance of the PYD led Syrian Kurds to a dead-end. ISIS has continued to advance on Kobani over the last three days and according to Turkish authorities, more than 150,000 Syrians have fled the violence in the past week.

Fire propagation: Is the reconciliation process in Turkey in danger?

In the last three days, due to the fall of Kobani, the PKK and HDP started a campaign against the AK Party government. The massive calls by Kurdish politicians and PKK leaders caused a riot, especially in eastern Kurdish cities. After severe clashes with police, five citizens died and the government declared a curfew in the five biggest Kurdish cities including Diyarbakır, Batman and Mardin. The ongoing reconciliation process came to the agenda with the question of whether it has been finalized or not or if it will continue. Official declarations are for the continuation of the process, however, Kurdish parties are more willing to continue street movements notwithstanding serious events including deaths and casualties.

These movements will possibly decrease public support for the ongoing reconciliation process in Turkey. They also will not bring any concrete benefits to prevent the fall of Kobani. Turkish Prime Minister Ahmet Davutoğlu expressed his thoughts regarding Kobani last week. He said late on Thursday, "We would not want Kobani to fall. We have opened our arms to our brothers who have come from Kobani. We would do whatever is necessary, our utmost to prevent Kobani's fall." His comments came after the mandate was given to the government to launch military incursions into Syria and Iraq and to allow foreign forces to use its territory for possible operations against ISIS. In addition, PYD leader Salih Muslim, in an interview with Al Jazeera Turk, explained that they nearly came to agreement with Turkey on every point. In this case, it is quite clear that Turkey has chosen Syrian Kurds over ISIS without missing the biggest target in Syria, which is to topple the Assad regime.

In this regard, both the PKK and PYD need to revisit their middle and long term plans regarding the region. First of all, the recent struggle in Kobani created a special Kurdish national awareness never before seen at such a degree. Secondly, Kurds received an important international legitimacy, which they had been seeking for the last two years specific to Rojava. After such mass media coverage, Syrian Kurds can never be neglected by Syrian actors, which was also the main official reason why the PYD stayed out of the FSA.

In the final analysis, the Kurdish political movements in both Syria and Turkey should give up being pragmatists in order to have pragmatic gains. This includes other Kurdish or Arab actors in the scenario and would determine a path for the future. The Kurdish political movements should also give up being opportunists in order to benefit from the opportunities in the region. This is to act in accordance with the ongoing reconciliation process. Deciding on these two points will determine the future of the region and whether Kurds will take a role in the near future or not.