A Turkish woman’s struggle to rescue her Macedonian history 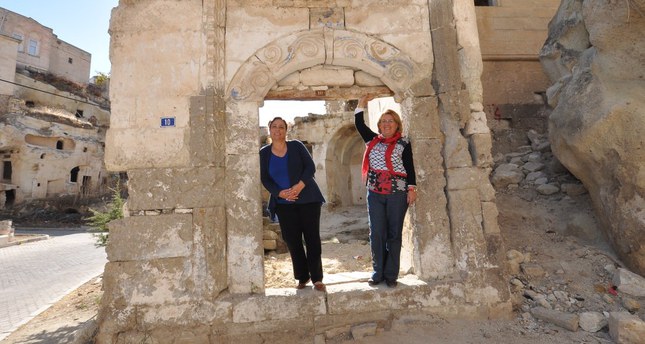 by Nektaria Petrou Oct 13, 2014 12:00 am
On Jan. 30, 1923, at the conclusion of a three-year war, Greece and Turkey signed the Convention Concerning the Exchange of Turkish and Greek Populations in Lausanne, Switzerland, the world's first internationally ratified act of religious cleansing. By 1924, approximately 1.5 million Anatolian-born Orthodox Christians and 356,000 Balkan and Cretan Muslims were evicted from their homelands and resettled on the opposite side of the Aegean. For the exchangees, the transfers led to decades of suffering, poverty, disease and, in many cases, death. For descendants of those who were forcibly resettled, including authors Süreyya Aytaş and Leyla Kaplan, it created a disconnection with history and issues of confused identity.

Süreyya Aytaş's grandparents and Leyla Kaplan's parents were forced to leave Jerveni, their mountain village in Greece's Kastoria region, and relocate to Mustafapaşa, a semi-arid village on the Cappadocian plateau, in the summer of 1923. Aytaş, now 47, grew up listening to stories about Jerveni. She learned that its wheat and bean fields were highly productive and that its mountains were full of tall trees and medicinal herbs. She heard tales of the exodus by foot, train, and ship and how disoriented her grandparents were when they arrived in Mustafapaşa, a stone village filled with the empty mansions of vanished Christians. She celebrated holidays unknown to Mustafapaşa's local Muslims and spoke with her parents in a Slavic dialect similar to Macedonian. Although proud to be Turkish, Aytaş understood that she had a different history.

The story that affected her most, she says, was of the day of departure from Jerveni: "The women wanted to visit the tombs of their ancestors one last time. Many of them fell down onto the graves, wailing. They were unable to get up. The men had to come and pull them off. That is how attached they were to their village."

Aytaş is not a university professor. She is a social studies teacher by training, a hotel owner by trade and a self-taught researcher by duty to her community. In 2007, just before the last living refugees from Jerveni passed on, the Foundation of Lausanne Treaty Immigrants published her first book, "Bitmeyen Muhacirlik" (Eternal Refugee), a compilation of testimonies from those who experienced the forced migration. She also participated in the production of two films: "An Oasis in the Desert: Cultural Heritage and Language of a Macedonian-Speaking Community in Mustafapaşa," produced by Giyotin Films in 2007 with funding from the Promotion of Cultural Rights in Turkey Broadcasting Support Grant Scheme (BSGS); and "Yaşayan Bellek" (Living Memory), a 2011 Turkish Radio and Television (TRT) production that documents the return of the descendants of refugees to their ancestral village in northern Greece.

Aytaş is now engaged in another effort to rescue the history of Muslim Macedonia: she is trying to publish her newest book, "Jerveni Village, Exchange and Liquidation Requests." While listening to first-generation refugees talk about their former possessions – how many fields they had, how many trees, how many animals and how big their houses were – Aytaş often wondered if any of it was true or if it was all just an idealization of the past. The only way to find out was by studying the "liquidation requests," that is, the official government records of the forcibly moved population's immoveable property, which was supposed to be restituted by the receiving country. Although the documents were never put to practical use (the resettled populations, especially Christians arriving in Greece, were lucky to be given shelter), they now have historical value. They show the number of animals owned, the size of landholdings, their location, the types of crops produced and the exact number and species of trees growing on the land in 1923. They also contain information from the exchangees' identity cards and can enable descendants to locate relatives lost during the displacement. For researchers working on the period, these documents give a complete view of the material status of pre-exchange Muslim villages in northern Greece.

In 2009 Aytaş learned that proposed legislation might soon restrict public access to Ankara archives pertaining to the exchange. She immediately called her cousin, a retired professor of Ottoman history, Leyla Kaplan, and asked her to partner up in a compilation and translation of Jerveni's liquidation requests. Kaplan was hesitant to accept. "She said that it would be difficult," Aytaş wrote in the compilation's introduction, "but in the end she too caught the 'exchange bug.' "

Aytaş said that she and Kaplan were able to secure copies of Jerveni village's 163 liquidation requests just before the new legislation went into effect, rendering the documents inaccessible to anyone but university-backed researchers and descendants of the forced migrants seeking information on their own families (and even for that, special judiciary permission is now required). Yet many refugee descendants do not know enough about their grandparents and great-grandparents to begin such a process. "The second generation had already forgotten where they came from," Aytaş wrote, "and only Thessaloniki [the city where their parents boarded the ship to Turkey] remained in their memories."

Even if descendants do have enough family information to gain archival access, another problem persists: the liquidation requests are in Ottoman script, which most Turks cannot read. "Leyla translated [these documents] to Turkish," said Aytaş, "so that tomorrow our grandchildren will not be as confused as we were."

One evening, just as Aytaş was about to leave the archives, an employee spotted her carrying the 163 liquidation requests and joked, "Are you your village's donkey?" Aytaş admits that sometimes she feels that way. Although she and Kaplan have submitted "Jerveni Village, Exchange and Liquidation Requests" to the Foundation of Lausanne Treaty Immigrants Press, the organization is unsure whether it will obtain sufficient funding to publish the work. And so the two women plod on like donkeys, looking for another not-for-profit publisher or a university press interested in preserving their history. When asked if the liquidation requests verified her grandparents' stories, Aytaş replied proudly, "It was all true. Every word."

*Author, did her postgrad in the U.K. and received life education in Greece, France and Turkey. She currently teaches the Modern Greek language in the American Southwest, nektariapetrou.com.