Anatomy of 'Protests against the invasion of Kobani' 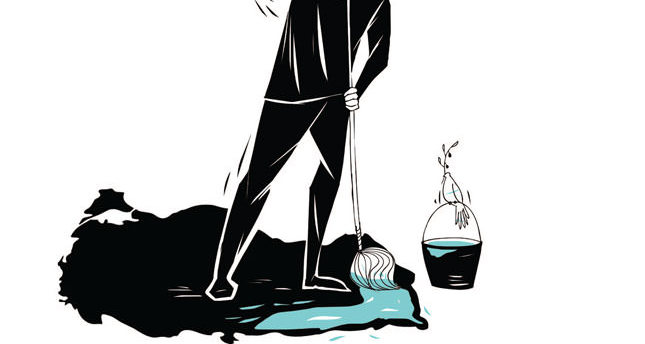 by Sami Orçun Ersay Oct 18, 2014 12:00 am
The protests against the invasion of Kobani have recently become the hottest topic on Turkey's agenda. So much so that, the non-conflict situation that had lasted for more than two years in southeastern Turkey abruptly ended, with clashes spreading to 35 cities across Turkey. A total of 37 people have been killed and hundreds more injured and arrested in nine cities where demonstrations continued. There are certain reasons why the invasion of Kobani, a predominantly Kurdish settlement in northern Syria, and reactions against it had such strong repercussions for Turkey.

Kobani is one of three Kurdish cantons in the Rojava region in northern Syria, which is under the control of the Democratic Unity Party (PYD) whose militia is the People's Protection Units (YPG). The other two cantons are Jazeera and Efrin. The first factor making Kobani strategically important for the Kurds is that, in addition to being a major settlement for Kurds, it is geographically located in the middle of the other two cantons. Because if the Islamic State of Iraq and al-Sham (ISIS) seizes Kobani, it will mean the loss of logistic connections and resources between the other cantons in the later stages of resistance. And such a development would pose a serious threat to the existence of Syrian Kurds. Again, that ISIS currently controls Tel Abyad, which is located between Kobani and Jazeera cantons and serves as a corridor, worries the PKK and its Syrian offshoot PYD. For the loss of these regions to ISIS would mean the loss of all gains made by Syrian Kurds - who benefitted the most from the chaos in Assad's Syria in the last three years - in northern Syria. In this regard, psychological tension arising from the fear of "losing the motherland" and the strategic importance of Kobani can be cited as reasons why the Kurds staged such harsh protests in Turkish cities against the invasion of Kobani.

Trans-boundary ties of kinship and HDP's mass mobilizable base

As for the second reason why the protests assumed massive proportions in southeastern cities, we can cite the trans-boundary ties of kinship and the special ethnic mix of the region that is open to mass mobilization. In this context, an important clue emerges in explaining the reactional intensity of the protests in Turkey against the invasion of Kobani: population structures of Kobani and of Urfa - and especially of Suruç district - are very close in terms of kinship ties. Similarly, primary relationships, in the sociological sense, between Efrin and Gaziantep and between Mardin and Jazeera canton are strong. On the other hand, these kinship ties make a question unavoidable: "So, why didn't Urfa become the center of protests despite these close kinship ties?" Or, if Gaziantep has similar ties with Efrin, why didn't it - unlike Mardin which empathized with Jazeera - witness as large protests as those in Mardin, Diyarbakır, Siirt and Batman? We can say that answers to these questions are roughly rooted in these cities' political preferences. Gaziantep and Urfa value their conservative identity above ethnic identities, with a demographic structure that gave 60 percent support to the AK Party in terms of political preferences at both national and local elections. In this regard, they have a demographic structure which doesn't easily respond to mass mobilization of Kurdish politics. But awareness of Kurdishness comes to the fore and shapes political preferences in Mardin, Diyarbakır, Siirt and Batman. This, together with the popular support for the pro-Kurdish Peoples' Democratic Party (HDP) exceeding 50 percent, renders these four cities suitable for mass mobilization by Kurdish elites.

The key to mass mobilization: Provocative agreement of İmralı, Qandil and the HDP against the reconciliation process

Although dynamic and politically mass mobilizable demographic structure of the four cities mentioned above played a considerable role in the protests against the invasion of Kobani, it must be underlined that the real blame lies with the Kurdish political elites. One of the main reasons why there have been no clashes in the past two years was that the HDP adopted a non-conflictual and rational mode of politics and invested in the reconciliation process. That Selahattin Demirtaş, co-chair of the HDP, got nearly 10 percent of the vote in the presidential elections confirmed HDP's position as correct, from a political point of view. In addition to this, other Kurdish actors who are active in the process, Qandil (PKK leadership), and İmralı (Öcalan) have also helped the reconciliation process keep on track by preferring a non-conflictual discourse during these two years. But first, PKK commander Murat Karayılan took a manipulative stance on Sept. 23, blaming Turkey for ISIS attack on Kobani and saying the reconciliation process was effectively over but adding that Öcalan would make the final decision. And then on Oct. 7, Öcalan (the jailed leader of the PKK) - just like Karayılan - warned that "Turkey has until Oct. 15 to act on peace with the Kurds, otherwise the process is dead." Finally, under the leadership of Demirtaş, the HDP called upon their supporters to take to the streets. As a result, the social base of Kurdish politics in the southeast, which has been silent but accumulating energy for action for two years, resorted to acts of violence as if seized by a fit of madness. However, in reconciliation processes like Turkey's, if clashes stopped a short time ago, the actors should conduct position changes and negotiations within the process in a controlled and slow manner so that social incidents that may cause huge public indignation can be avoided. In this regard, it is clear that Kurdish political actors have acted with ill-will on this matter. Because the Kurdish elite have calculated that, putting the blame on Turkey for Kobani's seemingly impending fall would stave off the PKK's disappointment and create a perception of victimhood, and that this perception of victimhood would likely provide political power and legitimacy to the PKK both at home and abroad. On the other hand, there are efforts to create the perception that Turkey secretly collaborates with ISIS, so as to justify every kind of arbitrary act/conflict situation that the Kurds might bring about during the reconciliation process.

Clashes between sympathizers of the Free Cause Party (or HÜDA PAR, which has organic links with the militant Islamist Kurdish Hezbollah) and the PKK acted as the spark leading the segments of society, which took to the streets upon the call of Kurdish elite, to get tangled up in a spiral of violence. What revived the feud between the PKK and Hezbollah which dates back to the 1990s was HÜDA PAR's expressing its ideological affinity with ISIS. When Hezbollah leader Edip Gümüş stated in reference to ISIS, "Those who say they are Muslim cannot be our enemies," his words activated the 20-year-old fault line of conflict.

The government's laying down a condition for providing support to Kobani - toppling the al-Assad regime in Syria in addition to expelling ISIS from the region - brings the Kobani crisis to a deadlock. Actually, what leads the government to defend this view is not only the fact that Assad is a dictator who has lost his legitimacy in the last three years by massacring hundreds of thousands of people. Ankara also believes that the PYD could achieve the de facto autonomy in northern Syria amid chaos and consolidated its power through its collaboration with Assad. So, the government thinks any support to the PYD, which is on good terms with the Syrian regime, would serve Assad. Consequently, there emerges two main reasons making it difficult for the government to take steps regarding the Kobani issue: the PYD does not sever ties with the Assad regime, and the U.S. stays away from Turkey's condition - toppling Assad - for joining the coalition against ISIS. In this sense, Ankara sees Kobani more as a diplomatic issue but closely embraces the reconciliation process and emphatically opposes its being taken hostage by the Kobani issue. Thus it is possible to identify in Davutoğlu's press release about the protests a reason of state which separates Kobani and the reconciliation process.

For the protests to fade away, first of all the HDP and other Kurdish actors should keep away from discourse that provokes people on the streets. Again, if the HDP returns to their reconciliatory political tone it had before the latest protests, and does not give in to the decisive position of the PKK leadership, it will maintain the legitimacy of its representation power in the process. As for the state, it should certainly control the streets in these extraordinary days. If PKK's supporters and Turkish nationalists - and different ethnic, religious, and political groups like ISIS sympathizers and the social base of HÜDA PAR - confront each other on the streets, the door to a civil war in the southeast would opened. Finally, next steps in the reconciliation process - which received legal recognition and became government policy after a six-item framework law was approved in July and a decree about the creation of steering and coordinating commissions was published in the Official Gazette - should be taken by the government resolutely.