When an environmental disaster becomes a security issue: The desiccation of the Aral Sea 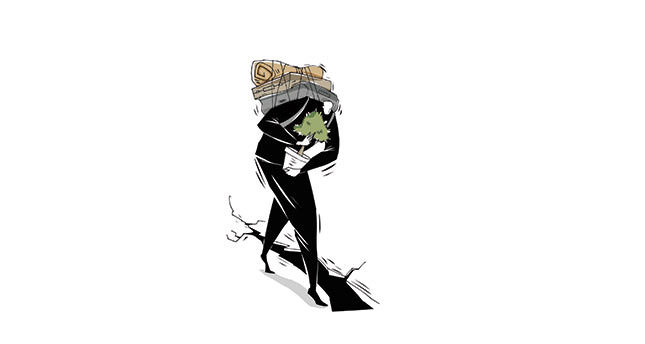 by Eşref Yalınkılıçlı Oct 20, 2014 12:00 am
Environmental security is a relatively new but vibrant concept in contemporary security studies, which focuses on non-military threats in today's highly globalized political spectrum. In other words, environmental change, global warming and all related problems are caused by environmental escalation as much as warfare conditions, which challenge the long-life of humanity on the surface of the earth day by day. Seemingly, the water problem in this overall picture of deterioration, once again comes into prominence, and it allegedly claims that water resources diminish gradually because of climate change and global warming all over the world. In the Central Asian context this problem becomes obvious in the world's largest lake and/or inner sea, the Aral.

The Aral Sea hitherto was a vivid source of subsistence for the people of Central Asia, and its surface has been a rich ecological habitat for both animals and plants in the region. But today, this natural source of livelihood is disappearing from the scene due to man-made mistakes. The NASA Earth Observatory recently reported that the summer of 2014 marked another milestone in regards to environmental disaster, and for the first time in modern history, the eastern basin of the South Aral Sea has completely dried. Most observers point out that early 1960s Soviet irrigation policies went awry, constituting the main reasons for the Aral Sea shrinkage problem. Allegedly, Soviet canal and dam projects have hindered the required water flow into the sea in combination with the high amount of evaporation in the hot desert climate of Central Asia.

Accordingly, the emergency of the situation makes the Aral issue one of the most important emerging environmental security problems of our age. As for Central Asia, the restriction of natural resources together with environmental problems has already challenged the security of states, economies and societies of the region. Such a challenge also undermines the legitimacy and capability of the new regimes since the Soviet break-up. Geographically, the Aral Sea Water Crisis is of concern to most of the newly independent states of Central Asia due to the historical mission of the sea and its cross-border location in between Kazakhstan and Uzbekistan and also to some degree Turkmenistan, Kyrgyzstan and Tajikistan.

Historically, the Aral Sea basin, particularly in between the rivers that fed it over long-fatigued centuries, the Oxus (Amu Darya) and the Jaxartes (Syr Darya), known as Transoxiana/Mawarannahr, is said to be the heart of Central Asia's so-called Turkic-Iranian civilization. These rivers also flow alongside the Tajik and Kyrgyz territories and pass through Kazakhstan in the north and Uzbekistan in the south, reaching deep into the Aral Sea. Moreover, sub-springs of these rivers directly coming from the soils of Afghanistan, Pakistan and China also complicate water management and trans-boundary water issues in the region.

Thus, the issue undeniably comes to the fore as a transnational regional problem, foremost between Kazakhstan and Uzbekistan, but also indirectly for all Central Asian states. Even though at first glance it seems like the side-effect of an environmental issue - global warming and climate change - it is a man-made disaster that by its very nature affects the people of the region in the long run. That's to say, the depletion of the water of the Aral Sea triggers a new crisis in which socio-economic and ecological lives are endangered and challenged by the side effects of environmental (in)security.

These negative side effects are evidenced day by day in the region, and all security sectors are extremely vulnerable to being affected by the Aral Sea crisis. Most notably, the economic security of the region faces a crisis, and as a result of the desiccation of the lake surface, one of the most important livelihoods - fishery and/or aquaculture industry - disappeared in the region. For instance, this was obvious in the Amu Darya Delta basin where people mainly had two types of employment, as fishermen and fish cannery workers in the Muynak fish-canning factory since Soviet times.

These factors led agricultural productivity to decrease, and the monoculture of the area, cotton, also known as "white gold" production, to decline gradually. Nevertheless, cotton maintains its supremacy in foreign commercial exchange as a "comparative advantage" for Central Asian economies, and it needs to consume more irrigational sources, which causes a cotton productivity race most notably among Uzbekistan, Turkmenistan and Tajikistan. If agrarian productivity is thought as the main source of economic activity for the subsistence of people in the region, the significance of water management and its potential dangers should be better understood in the context of regional security in Central Asia.

Economically, the bill for Aral Sea drainage also means unemployment, lack of navigation via the water, the diminishing of both drinkable and irrigative water resources and food supply crises, all of which diminish market prizes in the region's transitional economies. Undoubtedly, its negative effects on societal security are also conspicuous in the basin and are a great challenge to population growth, ethnic identities, social welfare, health care and in return triggering migration from the region. The situation seems almost the same all around the hinterland of the Aral Sea and Transoxiana, which was once the center of Islamic civilization with its most spectacular cities of arts and sciences, namely Samarkand, Bukhara and Tashkent.

Currently, one of the autonomous republics in Uzbekistan, Karakalpakistan faces all of those aforementioned problems, and its population is almost disappearing due to Aral Sea water mismanagement. Moreover, ecological damage also changes the climate and impacts not only animals and plants but also human health care and food security. In particular, infant mortality and morbidity rates have increased remarkably and incidents of many diseases, such as typhoid, tuberculosis, anemia, hepatitis A, diarrhea and respiratory diseases became epidemic in the region.

All these tangible and incontrovertible developments in and around the Aral Sea basin cannot be perceived as an environmental security issue alone. They also create discontent among the peoples of Central Asia and influence regional socio-economic and political stability. Hence, by its very nature this environmental problem should be concerned with societal, economic and political security sectors side by side. All these domino effects might eventually cause a military conflict among the peoples of Central Asia unless the problem is solved immediately. Even if at first glance the environmental insecurity of the region is seen as a result of climate change and global warming, it nevertheless essentially threatens human security in the region.

Today, the world's fourth biggest inland sea, the Aral, in the heart of Central Asia may perish. First and foremost, it seems like an ecological issue, but it should be perceived nonetheless as an environmental security problem that is regarded as an inseparable part of national security matters in the new global era. This unconventional threat to security could have a domino effect that might trigger other security sectors inside a country; even worse, it might cause armed conflicts in the long term. Undoubtedly, the shrinking of the surface of the water of the Aral Sea has had some concrete impacts on serious migration, unemployment and agricultural productivity, health care, food/water security and irrigation problems during the two decades of statehood of Central Asia. Those environment-related issues continue to influence the peace, welfare and stability of the Central Asian realm.

Currently, a water problem between Uzbekistan, Kazakhstan, Tajikistan and Kyrgyzstan has already increased tensions and mistrust and demonstrated that trans-border issues might easily become a hard power security perception in the region. However, the leaders of those respective countries have been well aware of the issue of the Aral Sea since their independence and have started some initiatives to cope with this environmental problem together with the international community.

Seemingly, all these endeavors are not enough to save the Aral Sea, and the escalating problem of the surface by the day. From now on, the desiccation of the Aral Sea is not a regional issue of the Central Asian states, but rather it has become a global environmental problem that should be considered by the main state and non-state actors of world politics. Therefore, the solution of the Aral Sea Crisis would be a good test of the ability of - not just Central Asian states and societies - but for all of humanity to cope with the environmental security threats of the 21st century.