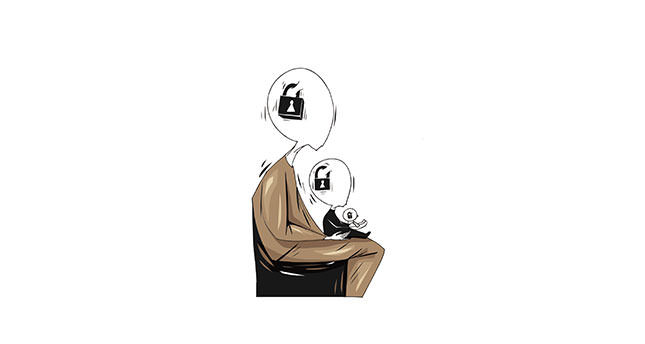 by Rabee Al-Hafidh Oct 24, 2014 12:00 am
When an outside power wants to penetrate an environment, it needs to win the hearts and minds in that environment. This was true in Muslim conquests. Unless it does so, it will be confronted by the society and won't be allowed in. To proceed with its ambitions, the outside power needs to undo this barrier, i.e., society itself. The state, which is the protector of society, has to stop functioning.

To nip any attempt by society to bounce back in the bud, all influential, outspoken and cerebral figures in that society have to be eliminated. Analysis of political events requires journalistic material, field data or statistics and understanding a phenomenon requires knowledge of historical patterns. What is unfolding in our region today is a reoccurrence of chapters from its past. The title of the unfolding story is "the collapse of the state and society."

People who have lost their livelihoods, security, wealth, health and life opportunities are not exercised by questions of nationalism, religion, sect, race or color. They are, however, alarmed and troubled by the nature of their society. They demand a better understanding of the unfolding events around them.

The struggle is between two very different types of systems. One derives its viability from maintaining a stable society and is composed of the three sectors: the state, the private sector and the charitable sector – a society of equal opportunities.

The other system is one that maintains its grip by mobilizing minorities into a tool to undo the very fabric of society, spreading hatred and animosity in the process. The task is easy and the advance is rapid until a natural barrier is reached where blood is shed.

The Persian Iranian regime is a pioneering example of this phenomenon. Persian Iranian rather than simply Iranian since Persians are the big minority responsible for the political character of the state of Iran. The Persian regime cannot hope to win the hearts and minds of the people in the region because its own interpretation of Islam clashes so violently with that of other societies in the region.

This describes Persian Iranian actions and helps explain Iran's incentives and designs on neighboring societies in the hinterland that have dominated the regional scene throughout the last three decades. The political and societal scene of Iraq, Bahrain, Syria and Yemen is but an embodiment of the consequences of such incentives. These are phenomena, rather than daily, weekly or monthly news reports or political events.

The reaction to these phenomena is profoundly connected to the societal geometry of the world – a geometry that falls into settled and globally recognized zones. These zones are very distinctive and not unlike city neighborhoods, they form patterns. Historically speaking there is Christian Europe, pagan Africa, Buddhist Southeast Asia, Catholic Latin America and Muslim Near East.

These patterns are as intolerant to outsiders as city neighborhoods are to alien settlers who affect their character and upset their way of life. Outside tampering with these zones will inevitably have to go through a brutal phase, which is exactly what's unfolding in our part of the world and slowly creeping to its main cities and states.

The arrival in 1500 of the Persian Safavid dynasty – considered the beginning of modern Persian history – into the region with profoundly antagonistic beliefs, ideology and interpretation of history to the established pattern of the region. This arrival formed a rupture that still exists at the heart of the Muslim corridor that stretches from the shores of the Atlantic into China. This rupture has become a battle field in an ongoing struggle for the value of society.

The scale of the change in identity forced upon the formerly Sunni Persia, which saw the cessation of society and the state and a takeover by militias, can only be paralleled in its cruelty by the tragic events in Muslim Spain eight years earlier in 1492 when Muslims had to choose between their lives and religion.

The breach of human rights of the main components of society in Iran today namely Kurds, Balochis, Azeris and Arabs rids the Iranian state of its societal character. This breach has now spilled into the region with the same result. It is nothing but a natural outcome of a phenomenon of a power desperate to maintain its grip on an environment that is not in harmony with its concepts and values.

States that adopt the first system form a soft target in this battle. This is due to differences in security and intellectual structures. The presence in these states ready to share ground and interim goals with outside powers is not unusual. The events of Kobani and the associated security and media insurgence in Turkey is a recent example. The likening of the mission of such spheres and the magnitude of its consequences on the integrity of the state to that of Lawrence of Arabia on the integrity of the region at the beginning of the last century is not unrealistic.

It is only natural that reason, rational thinking, facts and dialogue are the staunchest enemies of the latter system. Appeals and criticism do not work with this type of system, however, intellectual quarantine and isolation can. The engineering of the intellectual besieging of the enemy is based on the think tank; the institutes mandated in times of crisis to shape new concepts, mobilize and immunize the public and ultimately protect society and the state.

In every mission there are planners as well as victims. Had young generations been made aware of the threats that surround their countries, had they been shown the enemy's point of attack, they would have thought twice before taking to the streets or to the screens at such a critical moment in their history with acts, slogans and demands that can only be viewed as a gift to their foes.

Unmistakably, these important institutes are currently not engaged and are not being utilized for their true purposes while the crucial task of protecting national and regional security is left unfulfilled.