Can a Muslim-made* towel be sold in a Christian Market? 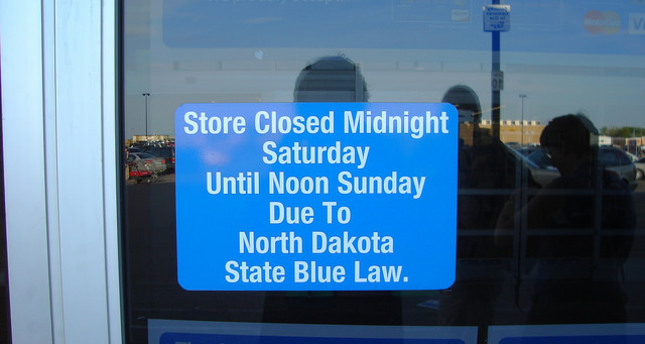 There is this common belief that Eastern societies are more driven by religious motivations than Western societies. Among Western nations, the U.S. stands in a unique position. There are many indicators that religious motivations are taken into account when it comes to decision-making, even at the level of local governments in the U.S. One can always be amazed by daily events that are happening in the country.

This Sunday I was once again surprised by a situation that I faced in a shopping mall. Timing is really important when it comes to in-store shopping. By the time I was entering one of the world's biggest retail chains in my town, I did not expect to be disappointed. When I was approaching the cashier I was not aware that a bunch of products had not been for sale on Sundays for a long time by a law called the "blue law." Unluckily, one item that I needed, a towel, was among those products.

After I left the store in a bad mood, I immediately did Google this completely new term for me. What I found was the origin of the law is Christianity, and Bergen County in New Jersey is one of the few counties in the U.S. that strictly implements these laws.

The very existence of these laws has its origin in 17th and 18th century America before U.S. independence. Apparently, some of these laws were first enacted by Puritan colonies in the 17th century. They prohibited the sale of various items on Sundays. Although there is no agreement where the term "blue" comes from, one belief that the laws were published in blue books when they were first enacted is most likely not the case as all laws were published on blue paper at that time.

Blue laws vary from state to state in the U.S. For example, blue laws prohibited the selling of housewares like those for the kitchen and washing machines on Sunday until 1985 in Texas. In Colorado, Illinois, Indiana, Iowa, Louisiana, Maine, Minnesota, Missouri, Oklahoma, New Jersey, North Dakota, Pennsylvania and Wisconsin, car dealerships are still subject to blue law prohibitions. In these states automobiles cannot be purchased or traded on Sundays. Maryland permits automobile sales on Sundays only in certain counties. Likewise, Michigan restricts Sunday sales in counties with a population of less than 130,000. Texas and Utah prohibit car dealerships from operating for more than one weekend day in a row. These laws were created or retained with the support of those whom they affected as they allow employees and businesses at least one day off each week without fear of missing out on competition.

How do blue laws affect business in Bergen County? Do people really want to be governed by this law?

The county is located within the region called the greater New York metropolitan area, which is one of the most active trade areas in the country. Shutting down businesses on Sundays certainly has adverse effects on the volume of business. Obviously, people wanted the laws to be lifted before. There were referendums in 1980 and 1993 that resulted with the resume of the law.

As one article published in The New York Times suggests, online shopping is a way to lift the ban.http://www.nytimes.com/2012/11/21/us/blue-laws-curb-consumerism-where-pilgrims-gave-thanks.html?adxnnl=1&pagewanted=all&adxnnlx=1413129643-iFk+owG/Z1to0H7RuaTokg New Jersey Governor Chris Christie has suspended the laws a couple times while in office. In 2012, because of the Hurricane Sandy, which caused massive damage in the state, Christie temporarily suspended the blue laws for a week.

Although many people may not be familiar with the origin of blue laws, its reference point is religion. Being governed by centuries-old laws is not something we always face in our lives.

*Towels are made in Pakistan
*Independent Researcher