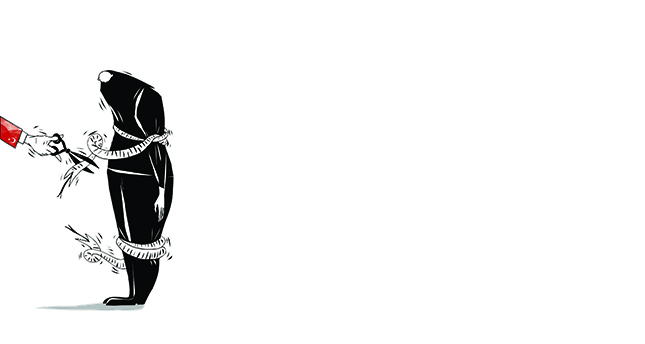 After a brief reprieve from years of chaos, constant violence and instability, Iraq is once again returning to a disastrous state of affairs. This time around, another grand man in the White House is coming up with another ingenious plan to save the country

Some people never learn from their mistakes. What's worse is that these people do not even want to admit that they have made mistakes, yet the way their minds work requires correction. The U.S. is a prominent example of this foolhardiness. Washington and its subservient Western allies think they can pronounce judgments from hotel meeting rooms and in front of television cameras, and the world's tricky problem will be gone. It's questionable whether they have any intention of finding solutions to problems. They so doggedly believe in starting fights for their pettiest of interests that they cannot consider how their actions will adversely affect other nations.

The humanitarian catastrophe in Syria is an example of Western messiness. All they want to talk about is how to fight the so-called Islamic State of Iraq and Syria (ISIS). They do not want to look at the root cause of the problem. There is no talk of Assad's massacre of civilians or how to help millions of refugees and find a solution to the crisis. The West wants to fight ISIS as long others do the dirty work for them. Turkey supports a campaign against ISIS but it cannot serve an outside agenda, especially not of those who come from thousands of miles away to exploit the region's problems for their power games.

Washington had sought to rope in Turkey along with some Arab League members in an anti-ISIS military alliance. As the U.S. lacks a broad vision for Middle East peace and continues to pursue its narrow-minded agenda by sowing chaos in country after country, Turkey was right not to sign its communique at the Jeddah meeting U.S. Foreign Secretary John Kerry held with a number of countries from the region. The 10 Arab members of the so-called alliance - Saudi Arabia, United Arab Emirates, Egypt, Jordan, Lebanon, Qatar, Kuwait, Bahrain, Oman and Iraq - all signed the U.S.-drafted statement. Needless to say, there are some Arab League members who thoughtlessly parrot Washington's line on Middle East affairs and these would not mind blindly following the U.S. even if that path led to an abyss.

In 2003, Turkey refused to be part of U.S. plans to invade Iraq. Today the whole world can see what sort of chaos the U.S. and its so-called allies created in Iraq. The Arab League has contributed to the region's crises. And it's the Arab masses who suffer. Now a new coalition aims to enable U.S. President Barrack Obama to act collectively against ISIS and stop its members from swimming to the shores of U.S. and attack its cities, people and infrastructure. There is too much grand talk from the U.S. president but no coherent and transparent policy. The U.S. media will mostly report official line and spread mass ignorance.

Saudi Arabia has apparently agreed to train the so-called moderate members of Syrian opposition fighters to battle against Bashar Assad's regime in Damascus. Long before the emergence of ISIS, which has some bizarre ideology, Turkey has been calling for strong military support to anti-Assad forces. But the countries that spend billions of dollars on wars for natural resources and to expand their imperial influence do not see much profit in Assad's downfall.

For Turkey, Assad's removal is the key to solving the Syria crisis. Two other demands of Turkey must be taken into account if the U.S. is serious about playing a constructive role in Syria: a safe zone for people fleeing the conflict must be created along with a no-fly zone to make sure people will be safe from Assad's bombardment. The significance of the Jeddah meeting was the presence of Iraq, a key Arab ally of the Assad regime, along with Saudi Arabia and Qatar on the same table. Iraq under Nouri Al Maliki extensively blamed Saudi Arabia and Qatar for stoking tensions both inside Iraq and in Syria.

On the other hand, Turkey does not want to be seen with the aggressors and occupiers just like 11 years back, when in 2003 the Turkish government refused to allow Turkish bases and borders for U.S. forces to wage a war against Iraq. The U.S. will never admit it launched the war for Iraqi oil and to set up new military bases in the region. Now George W. Bush's successor, Barack Obama, who is criticized by some as the black Dick Cheney, has included Syria along with Iraq in his proposed war. After killing countless people in two Iraqi wars and the Afghanistan invasion, the U.S. with its coalition of lackeys is back in Iraq again. The grand man in the White House now has a plan to save mankind from the savagery of terrorism that Americans themselves have planted and nurtured over the years. The ISIS onslaught and expansion though aided and abated by the U.S. has created an environment for another invasion of Iraq. Of course, it doesn't matter to Arab leaders how much blood outsiders shed in the Middle East as long as they feel important in their trappings of false power.

The emergence of ISIS is an outcome of wrong-headed U.S. policies. It came into the picture after the vicious sectarian policies of U.S.-Iran-backed former Iraqi Prime Minister Nouri Al Maliki and three years of massacres by Iranian stooge Bashar Assad. The U.S. has devised a plan to kill the effect but has no cure for the cause of the disease. Turkey has lived with the aftermath of the U.S. invasion in Iraq and understands the dangers of such actions to regional peace. Today's imperial powers not only create the cause but also the effects like al-Qaida and ISIS, and then in the name of eliminating the terror, produce more terrorism.