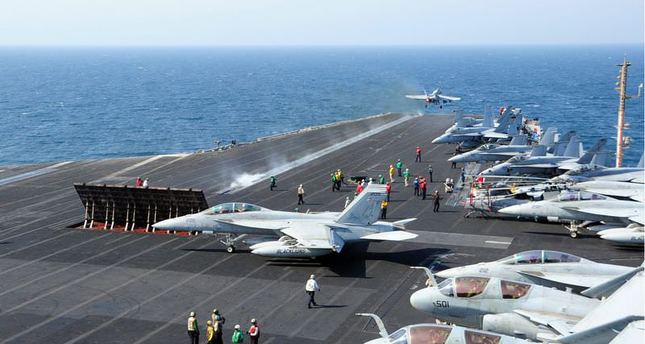 by Kadir Üstün
Oct 29, 2014 12:00 am
Ever since President Obama announced that the U.S. would "degrade and ultimately destroy ISIS," American policymakers have been scrambling to put together an effective alliance. The U.S., with help from its Gulf allies, has conducted hundreds of airstrikes, but the results have been less than impressive. The U.S. has ruled out "boots on the ground," and no outside power has been willing to send soldiers. Though the U.S. is banking on the Baghdad government and Iraqi Kurdistan Regional Government (KRG) President Masoud Barzani's forces to take the fight to the Islamic State of Iraq and al-Sham (ISIS), both of these forces currently remain focused on protecting their own territory. Moreover, the success of the plan to create a Sunni national guard in Iraq is far from certain. Training and arming the Syrian opposition remains a long-term endeavor with little promise of immediate results.

Ankara expressed a willingness to provide ground troops, however, only if the U.S. and its coalition partners agreed to create safe zones protected by a no-fly zone with a political objective to push for a transition in Damascus. There are stark differences between the U.S. and Turkey about how to approach this threat because the U.S. continues to define its objective narrowly as targeting ISIS. In contrast, Ankara advocates for a broader strategy to address the Syrian civil war as a whole. The fighting in Kobani has only underscored the differences in these two approaches.

The Obama administration's Syria policy has oscillated between an earlier commitments to regime change to near dismissiveness about getting involved in "someone else's civil war." The U.S. has found no significant interest to justify intervention in Syria, despite continual warnings that the situation would simply get worse. In the wake of Syrian President Bashar Assad's repeated chemical weapons attacks on civilians, the Obama administration settled for the Russian-brokered deal. Left to its own devices, the Assad regime has felt free to continue its killings - more than 200,000 deaths by the most modest calculations - use of chemical weapons and support of terrorist groups. Turkey's view is that the Assad regime is directly responsible for the growth of ISIS as it facilitated the group's advances to counterbalance the Syrian opposition. In contrast, the U.S. refuses to confront the Assad regime in a serious way, arguing that there is no viable alternative and that the collapse of the regime would lead to further instability. With the fall of Mosul to ISIS in Iraq, the Obama administration was faced with the collapse of its Iraq policy, which had already been criticized for not including a residual U.S. force. The U.S. is now being pulled back into Iraq with the Baghdad government and KRG requesting help. Moreover, American public opinion shifted quickly toward taking action in the wake of ISIS's brutal beheadings of American journalists. Under domestic pressure and the real danger that the Iraqi state could collapse, President Obama announced a counterterrorism strategy that was more reactionary than well developed.

The problem reaches far deeper than the emergence of yet another terrorist organization. There is an overwhelming feeling of disenchantment among Sunnis, which ISIS cynically tapped into and manipulated. In the context of Iraqi politics, the removal of Nouri al-Maliki as prime minister was a positive step that addressed certain Sunni grievances, but it might prove to be too little too late. By neglecting the Syrian civil war and Maliki's sectarian policies for so long, the U.S. and the broader international community are at least partly responsible for the emergence of ISIS. If the U.S. fails to address the conditions that created ISIS in the first place, its anti-ISIS strategy will be ineffective and U.S.-Turkey cooperation will be hampered. While the U.S. remains unwilling to expand its mission beyond the goal of defeating ISIS, Turkey feels that limiting the mission to ISIS alone will only provide a short-term solution at best and will likely serve to benefit Assad in the long run. Turkey does not want Kobani to fall to ISIS as Ankara decided to allow KRG peshmerga forces to cross into Kobani through Turkish territory, but Turkey's position is complicated by the fact that the PKK-linked Democratic Union Party (PYD) is fighting against ISIS. The PKK remains a threat for Turkey, as it has not withdrawn from the country and has conducted fresh attacks on Turkish security forces. As Prime Minister Davutoglu said, if the PKK had already withdrawn from Turkish soil and avoided threatening Turkey, Ankara's approach to the PYD may have been different today. Given that Turkey feels it is faced with two bad choices - helping the PKK gain ground in Syria or ISIS controlling Kobani - the U.S. needs to avoid alienating Turkey through unilateral moves such as helping the PYD against Turkish advice.