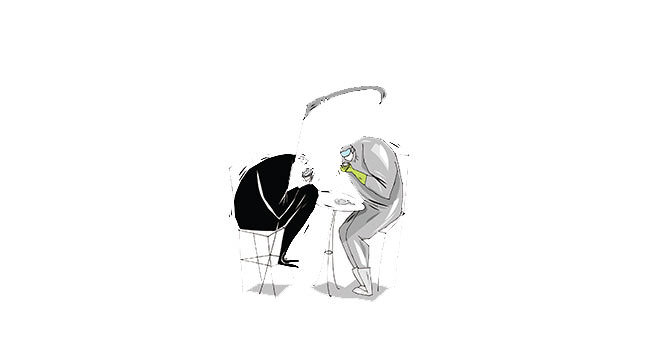 by Özgür Tüfekçi
Oct 31, 2014 12:00 am
The threats posed by Ebola and the Islamic State of Iraq and al-Sham (ISIS) might be perceived as enemies of humanity. One of them is a disease and the other is a terrorist organization. However, both kill people, irritate public opinion, terrify states and spark panic across the world.

Outbreak of the Ebola virus

Currently, West Africa has been experiencing its biggest outbreak of the Ebola virus, which has caused thousands of deaths so far. According to the World Health Organization's (WHO) latest report, the number of cases from the Ebola outbreak has exceeded 10,000 with 4,922 deaths. And only 27 of the cases have occurred outside the three worst-hit countries of Sierra Leone, Liberia and Guinea. WHO also announced that the figure could be much higher as many families were keeping relatives at home rather than taking them to treatment centers. The U.S. Centers for Disease Control (CDC) announced that if nothing changes there could be 1.4 million cases by late January.

African countries such as the Democratic Republic of the Congo, Sudan, Uganda, Nigeria, Guinea and Sierra Leone have experienced outbreaks of the Ebola virus several times since 1976. However, this is the biggest outbreak ever. It is believed that the reasons why this current outbreak infected and killed this many people are poor public health systems, high population mobility across states, densely populated cities and a distrust of local governments.

The latest outbreak began in the village of Meliandou, Guinea and spread to family members and caretakers of a 2-year-old child. Since its beginning it spread across Guinea, Liberia and Sierra Leone and now also threatens Ivory Coast. Ebola is not an airborne disease and it spreads from human to human through contact with bodily fluids such as blood, vomit, semen, urine or saliva. As far as we know, the fatality rate is around 70 percent while past outbreaks of Ebola killed up to 90 percent of the people infected.

ISIS's emergence can be traced back to the late Abu Musab al-Zarqawi in 2002. His formation of al-Qaida in Iraq paved the way for the creation of the Islamic State in Iraq (ISI). Zarqawi's death in 2006 and Abu Bakr al-Baghdadi's leadership of ISI since 2010 rebuilt its capabilities. After managing to re-activate ISI in Iraq, Baghdadi joined the Nusra Front in Syria to fight President Bashar Assad. Following that he announced the creation of the Islamic State of Iraq and al-Sham (ISIS) through merging his fighters in Iraq and Syria. Although this movement was not approved by the leaders of the Nusra Front and al-Qaida, they could not prevent the emergence of another brutal extremist group of ISIS, which has fighters from across the world. It is believed that ISIS has more than 30,000 fighters and at least 30 percent of them are foreign nationals. Officials also point out that ISIS currently controls more than 40,000 square kilometers of Iraq and Syria.

What makes them different from renowned terrorist organizations such as al-Qaida is their brutality as they practice methods of execution such as mutilation and beheading of opponents and rivals. The organization promotes its own brutality through videos of executions. The reason for that is to create fear and paranoia among communities and that fear is the main motive to terrorize daily life where ISIS seizes control while at the same time it is one of the reasons for capturing the amount of territory they have taken - sometimes without any apparent resistance. This brutality and controlling such a wide area have caused ISIS to control more than half of Syria's oil assets and to earn around $3 million per day. In this sense, we may deduce that while ISIS is one of the most brutal terrorist organizations, it is also the world's wealthiest terrorist organizations.

What is at stake?

It is known that ISIS is a highly popular terrorist organization, recently. The majority of conspiracy theories have been recently reformulated on the possibility that ISIS might be the organization to use the Ebola virus for its own purposes. At the end of the day, it would not be difficult for such an organization to reach infected bodily fluids for use at another place of the world. This is one of the worst case scenarios that we do not want to happen as Ebola and ISIS are already deadly twins.

Yet it might happen when it is considered that some bio-terrorism cases have been experienced in the past such as the 1984 Rajneeshee bioterror attack that poisoned 751 individuals with salmonella. Or the 2001 U.S. and Chilean anthrax attacks that killed five people, was another example of bioterrorism.

Lessons from the Ebola outbreak and ISIS

Casualties of both threats cannot be predicted precisely. For instance, because of poor public health systems in West Africa we do not know how many people have been infected by and died from Ebola thus far. International organizations announce the death toll does not give away the precise number of casualties as many families are keeping infected people at home rather than putting them in isolation in hospitals or treatment centers. When it comes to ISIS, we only know how many foreigners have been beheaded if ISIS airs the videos. Apart from that, we do not know how many people have been killed in the midst of conflicts or how many women have been sold at jihadi slave markets. What we do know is that they are real threats to humanity. However, these apparent threats have been underestimated and action should have been taken much earlier to prevent the spread of both of them. Both cases were only perceived as threats when they were internationalized. Namely, when ISIS beheaded James Foley, Alan Henning, Steven Sotloff and David Hainess or when Ebola surfaced in the U.S. and Europe, international powers realized that someone needs to do something instead of underestimating and denying the threats.

If these threats are not taken seriously, the world will need to face not only security issues, but also economic issues. For instance, Ebola has a devastating impact on the economies of West African countries. Currently, these economies have been deflated more than 30 percent and the growth of their gross domestic product is expected to fall to 1 percent in 2014. In the short or long term, it would not be wrong to expect those figures to affect regional countries as well.

In conclusion, we all know that international political powers should have responded to these threats earlier. Yet there is a chance to get rid of these deadly twins. Both threats spoil vulnerable systems. The only way to succeed is being determined and building complex strategies. Fighting these threats is not enough. By doing so, weakened systems that are spoiled by the threats need to be rebuilt. International political powers also need to learn that in a globalized world no country has the luxury to play down threats. It is important to act immediately when crises in any country take place as it will affect the whole world sooner or later.