Egyptian students to Sissi: It is not over yet 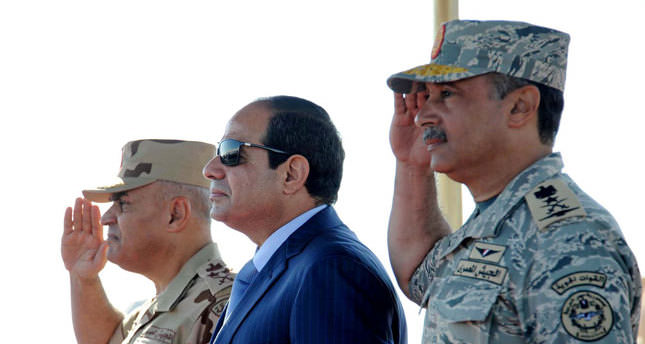 by Ahmad El Nashar Nov 07, 2014 12:00 am
Just when General Abdel-Fattah el-Sissi and his gang thought that things were starting to get in control, thinking that the waning demonstrations in Cairo were a sign that people were giving up, along came Egyptian students to tell them it is not over yet. The dictator and his gang were anticipating this to an extent, actually to be more accurate, they feared it. That is why they delayed the beginning of universities for almost a month, set up security checkpoints at university gates and even hired private security forces. They announced how they would recruit "loyal" students to inform security about "troublesome" individuals and used their media puppets to warn troublesome students of the consequences of their actions. Yet despite all of their efforts, pre-emptive strikes and threats, on Saturday, Oct. 11 valiant Egyptian students played their usual role in the country's history of change in becoming the military regime's worst nightmare. With peaceful student demonstrations occurring throughout dozens of universities across the country and later on being joined by high school students, the ugly face of President Sissi's regime came to the forefront again. Scores of students were arrested and more were injured because security forces fired tear gas and iron pellets at their peaceful demonstrations and marches. Other than removing the harassment checkpoints that had been setup and chasing private security members until one of them lost their pants in the process, the Egyptian students once again rekindled the waning spirit of the Jan. 25 revolution. Having said that, it is important to outline three important ingredients that will help sustain the Egyptian student's uprising and maybe lead it to be the beginning of a new wave of mass opposition throughout the country.

There is no doubt that the revolutionary spirit in Egypt from the past has been waning. The confused actions and statements of opposition leaders, the dwindling number of participators in weekly marches and the signs of internal struggles among coalitions and opposition groups are among the many indicative signs that the revolution has been losing momentum. What took place at Egyptian universities this last week came just in time to ignite hope once more. Egyptian youth are the most important component of Egypt's revolutionaries. Within them is an endless amount of energy, creativity, daring and persistence in their pursuit of achieving their goals. These are all qualities that have been lacking in the actions of Egyptian revolutionaries this past year and it is crucial that we learn, support and leverage the Egyptian youth to ensure that we regain them once again. In fact, it is important that Egyptian youth recognize that they need to maintain these qualities in order for their efforts to become sustainable and effective. Students must not stop their actions of opposition in marches and demonstrations, they need to demonstrate creative approaches that will enable them to get more support from those around them and also confuse the oppressive regime they are facing. Therefore, the first important ingredient needed is to ensure that the four qualities of energy, creativity, daring and persistence are maintained and used as leverage.

In order to get this first ingredient, students need to possess the second important ingredient, which is to have a strategic outlook of what they are doing. One of the most important complaints among revolutionaries with regard to the marches and demonstrations taking place during the past year is the lack of vision or end in mind. This eventually led many to give up joining marches and demonstrations. This is a learning lesson that requires Egyptian students to have a strategic outlook and direction to their movement. They need to identify the stakeholders influenced both inside the educational system and from the larger society and create a set of targets for each stakeholder. For the educational system, revolutionary students need to answer questions like how they are going to engage other non-sympathizing students. To what extent do they want to disrupt the educational process? How can they handle their parents' community? What can they do to engage teachers and professors? What are their publicly communicated goals? As for the larger society they need to consider how they will engage with the media. What messages are they trying to send to the rest of the country? Can they collaborate with other aligned entities like trade unions and local and international youth movements? Some might argue that this is too theoretical and time consuming, however, without answering such questions students will eventually find themselves limited to a number of choices and actions that will lead them to eventually lose their distinctive qualities mentioned earlier.

The third important ingredient the students need to consider is collaboration. Egyptian students need to realize that they need to be able to collaborate with as wide of a circle of stakeholders as possible. In doing so, they will be able to increase the size of resources available to them both human and non-human. They will also have access to a wide choice of battle grounds through which they can engage with Sissi's oppressive regime. There are already a number of initiatives launched abroad in solidarity with the Egyptian students, which indicates the willingness and seriousness of different stakeholders even those who are far abroad to support their cause. This is an important sign that should encourage the students to think of different stakeholders and their means of collaboration. One of the opposition groups' main failure so far has been their inability to harness the energy and capabilities of each other. This is something the students must avoid and, in fact, seek to demonstrate how collaboration between different groups and individuals can be attained.

Pessimists will argue that it has only been a week since the students started their protests and they will eventually run out of steam. However, in Hong Kong's student uprising is a reminder of how far these brilliant and hopeful youth can reach. Egyptian youth inspired the world three years ago when the feeling of despair had overcome our nation. Once again they demonstrate they are a renewable source of defiance and hope. Once again Egyptian youth are sending a confident and proud message to the trembling hearts of the dictator and his band that as long as they live, our struggle for freedom and justice continues.