Freedom was his dream, prison became his life 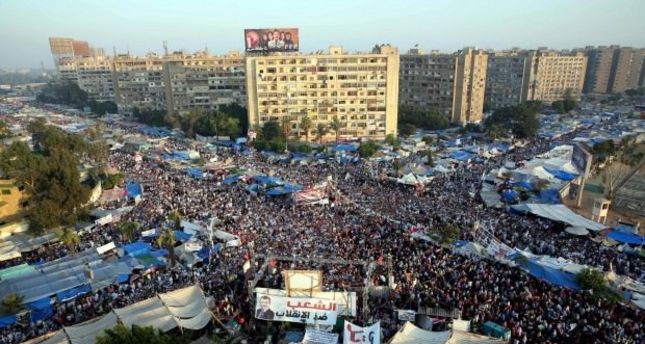 by Ahmad El Nashar
Nov 12, 2014 12:00 am
I first met him at Rabaa Square, he was a lively cheerful person, and despite his frustrations with those organizing the sit-in, he was always optimistic about the future. We both spoke fluent English and so we were frequently interviewed by foreign media to comment on the events taking place at the time. We sat together frequently and exchanged ideas and thoughts about what was going on and our own motivations for being part of all of this. The answer was always simple – we wanted our freedom back and we wanted social justice. Both of us were raised in environments that enabled us to speak our minds and question everything. We were raised in environments that revealed to us how freedom is a huge empowering concept that allowed people to achieve wonders. We were raised on the fundamental principle that without justice, no society could ever progress or live in peace. We learned that tyrants and military dictatorships brought nothing but misery, pain and suffering. We lived through the injustice and cruelty that tyrants like Hosni Mubarak, Abdel-Fattah el-Sissi and their predecessors inflicted on us and our people. Both of us had personal firsthand experiences with those cruel inhuman regimes that left their marks on our families and bodies. So when we were asked by reporters why we were in Rabaa, our answer was not about the military coup or then President Morsi, it was about the fundamental human rights of freedom and justice. As was the case for many of us so was Mohammed's dream for Egypt and the Jan. 25 revolution brought us very close to realizing that dream.

For passionately and peacefully pursuing his dream Mohammed has been detained, tortured and exposed to some of the harshest measures of detention. For almost a year they could not accuse him with anything and when they decided to make up a story, they said he was an organizer of the Rabaa sit-in. When I first heard the joke about the accusations it brought back a flood of memories. I remembered our endless arguments with the organizers of the sit-in that they needed to change their slogans and branding to reveal the real reasons for the revolution. I remembered how we paid out of our own pockets and those of our friends to re-brand the sit-in as pro-democracy. I remembered how we planned to take control of the main stage to be able to change the speakers and change the message being sent out so that we can once again unite the Egyptian revolutionaries around the simple slogans of freedom, bread and social justice. I remembered how we failed in the end, but we agreed to stay there because despite of our frustrations we knew that what we had in common with those in Rabaa was more important. I remembered how we sat one night and whole heartedly agreed that our morals, beliefs and ethics dictated that we had to stand by those fighting tyranny and injustice despite our differences.

When I called him after the brutal attack on the sit-in, I found out he had taken a sniper bullet to the arm but could not get to a hospital for treatment because he was afraid of getting arrested. Yes, in countries ruled by tyrants like President Sissi, people like Mohammed Sultan would be sent to jail and tortured rather than being treated. Ten days later he was arrested at his home and despite his deteriorating medical condition, was sent to jail and tortured. Since last January, Mohammed Sultan started a hunger strike to protest the inhuman treatment he was being subjected to. This is no surprise, because unlike many of his cellmates who chose to succumb to their fates and attempted to adjust to it, Mohammed decided to do what he knows best – to fight for his basic human rights even if it cost him his life. To him the hunger strike was his means to tell his oppressors and jailors that even though they imprisoned his body, his soul was as free as ever and was still capable to expose to the whole world their reality of being unjust and brutal tyrants.

It is the story of people like Mohammed Sultan that should constantly be headline news in mainstream media because of the inspiration and hope they bring to the millions out there, in Egypt and elsewhere, suffering similar conditions. I was lucky enough to have fled from Sissi's tyrannical grip and many friends and family have asked me to stay quiet and lay low. My brother, Mohammed Sultan's story is a constant reminder and motivator that quitting is never an option. As free souls we need to do what we inherently know best and that is to relentlessly resist the likes of Sissi and his gang. "Freedom, bread and social justice," is not simply a slogan, it is our life mission until death.