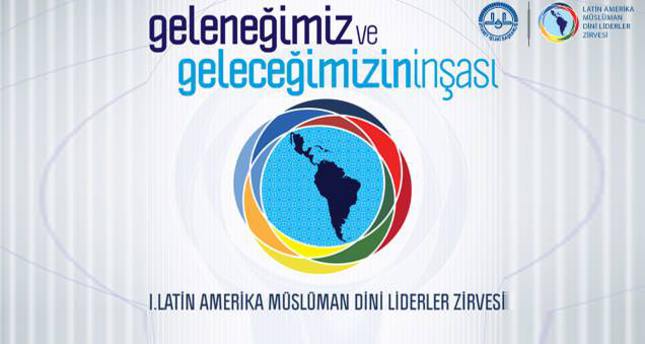 by Mehmet Özkan
Nov 14, 2014 12:00 am
Until recently Turkish-Latin American relations have always been analyzed through the prism of Che Guevara sympathy and romantic socialism. This, in reality, has produced nothing concrete to help develop relations between both sides. What it has produced is a romantic understanding of Latin America and a paradigm that sees developments on a continent that sees things only as either black or white, namely socialism and capitalism. The other understanding that has persisted in Turkey is to look at Latin America in terms of popular culture, such as music, salsa, tango et cetera. These perspectives are now beginning to change, at least on several fronts.

Turkey's Directorate for Religious Affairs (DİB), for the first time, organized a Summit of Latin American Religious Leaders in Istanbul that began on Nov. 12 and ends on Sunday with a total of 71 people from 40 countries in attendance. Not only have community leaders joined from key countries like Brazil, Argentina, Venezuela and Colombia; but also there have been representatives from small countries like Belize and Barbados among the invitees. One of the main aims is, of course, to establish links and share experience. Because of this, most of the topics discussed have been related to the understanding and identifying of problems that Latin American Muslims face. The main issues raised are the lack of sufficient religious leaders who speak Spanish and religious books in Spanish. According to participants, one of the main ways of communicating, teaching and learning for Latino Muslims is using the Internet and various online sources. Subsequently, many participants have focused on credible online sources of Islam and its easy availability.

The DİB's summit cannot be understood without contextualizing the political opening of Turkey to Latin America in the last decade. Since the announcement of 2006 as "the year of Latin America" in Turkey, Turkish foreign policy makers have put a special emphasis on Latin America. Ankara opened new embassies in countries like Colombia and Peru, and mutual visits have intensified. Several Latin American countries opened embassies in Ankara and the Presidents of Colombia, Brazil, Argentina and Ecuador have visited Turkey along with many foreign ministers from the continent.

Despite the huge geographic distance, social relations are also on the increase. One can encounter many couples living either in Latin American countries or in Turkey. At the same time many students are studying in Turkey through the scholarships of the Presidency for Turks and Related Communities Abroad (YTB) and TÜBİTAK. There is also an increasing interest from the academic community to study and do research about the linkages of history, politics and culture between Turkey and Latin America.

Turkey's religious opening to Latin America also goes beyond bilateral relations and is partly down to the natural extension of Ankara's Middle East policy with unexpected outcomes. Many Muslim organizations are run by people of Arab descent in Latin America and most of their ancestors arrived to the continent with Ottoman passports in the late 19th and early 20th century. Indeed, many people think that these Arabs are Turks and call them "Los Turcos."

Although Latin America is less well known in Turkey, it is not an exaggeration to say that Latin America is the continent where the Turkish passport has the most validity and acceptance. In order to connect the social aspects, there are Turks who not only represent the Middle East but are also integrated into Latin culture. Similarly, there is an ongoing phenomenon, although neglected in Latin America, that despite the existence of very few activities proselytizing, Islam is the fastest growing religion on the continent today. Of course, when one considers the huge population of Latin America, the number and percentage of Muslims remain very low. However, it can be estimated that there are about 6 million Muslims on the continent, which stands as 1 percent of the entire population. However, what statistics show is open to debate for two reasons. First, there is no reliable census of the population about Muslims. The second and more important reason is that the number of Muslims grows by the day.

There is very little research on this phenomenon. The age of converts to Islam in Latin America is in the 17-27 demographic. This leads us to the conclusion that young Latinos are interested in Islam, a phenomenon that should be investigated. By connecting with this group, Turkey can deepen the social base of possible cooperation and development between Latin America and Turkey further. In fact, the social base between two regions is already developed with input from various actors of civil society organizations. With the DİB's new opening, religion is not only becoming one of the most important elements of Turkey's soft power in Latin America but also an important aspect of Turkey's social connection with different regions.