Greek Cyprus on the wrong path 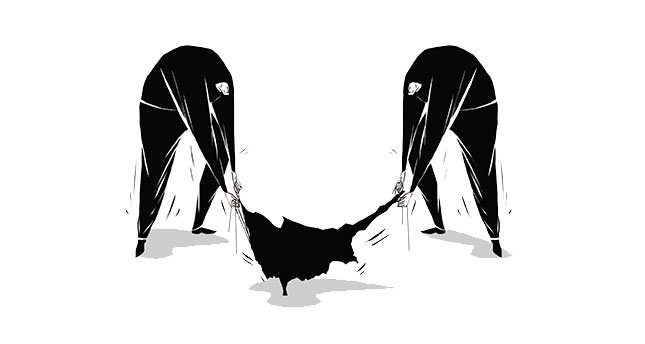 by Emre Yılmaz Nov 21, 2014 12:00 am
Stalled negotiations between Turkish and Greek communities on Cyprus were revived by U.S. initiatives 10 months ago, which increased hope in a possible solution. Needless to say, revitalizing negotiations was no coincidence with discovered rich natural gas resources around Cyprus and Israel. It is also crucial to remember what transpired just prior to bringing both communities to the table. Initially, Turkey came up with the idea to constitute a poll in which all income of charged natural gas resources by Greek Cyprus should be gathered and then shared by the two communities. Greek Cyprus reluctantly approached this proposal and Turkey eventually dispatched its navy and seismic exploration ships to the coastal waters in the Greek Cyprus's exclusive economic zone. Turkish Cyprus is solely recognized by Turkey. This escalated tension in the Eastern Mediterranean and alerted the international community's attention; it was well grasped that a solution on the island became indispensable. Otherwise, it would be very hard to calm down the water boiling in the Eastern Mediterranean. Thus, 10 months earlier, the existence of rich natural gas resources around the island was supposed to play a catalyst role in resolving the four-decade-old problem between the two communities. Yet today, increasing hope through natural gas resources to solve the problem led to the escalation of tensions. Rather than what it was supposed to be at the very beginning of negotiations, now the tension in the Eastern Mediterranean is gradually increasing.

Recently, Greek Cyprus announced the suspension of negotiations by hiding behind the reason of Turkey's dispatched war ships to the location of its exclusive economic zone. Subsequent steps taken by Greek Cyprus, such as conducting military exercises and propping up economic relations in terms of the very sensitive issue of natural gas, are clear cut proof that the Greek administration wishes to exploit the conjectural developments, particularly considering Turkey's frozen relations with Egypt and Israel. However, these steps will never provide maximum benefits to either side in availing the benedictions of the Mediterranean. Most importantly, as long as Greek Cyprus continues to avoid being any part of the solution, the tension in the Eastern Mediterranean will provide unforeseen security risk.

Since the very beginning of the Cyprus question, Turkey has been committed to protect Turkish Cypriots' rights stemming from the London and Zurich Agreements and even used its hard power in 1974. It is quite obvious that Turkey would retaliate the bypassing of Turkey and Turkish Cypriots by Greek Cypriots with the inception of a zero sum game in the Eastern Mediterranean that will eventually lead to a boiling over of the issue. Dispatching Turkish warships to the coastal area off Greek Cyprus was indeed not a big surprise even in the earlier stages of the discovery of natural gas. However, after the discovery of rich natural gas resources around the southern coast of Cyprus, it became a component of the prolonged problem and Turkey was more determined to do its utmost in order to maintain Turkish Cyprus's interests.

Interestingly, Greek Cyprus is now pursuing a strategic partnership with regional countries against Turkey over natural gas, which is remarkably different from past experiences. They generally preferred to keep Turkish Cyprus at the negotiation table because the more they accomplished holding Turkish Cyprus in negotiations, the longer they took pleasure enjoying being the representatives of the entire island in the international community. However, this approach became non-applicable after the referenda on the Annan Plan for Cyprus, which was an elaborately prepared solution that was rejected by the overwhelming majority of Greek Cypriots while the vast majority of Turkish Cypriots approved it. Nevertheless, Greek Cyprus joined Turkish Cyprus for rapprochement and simultaneously was exploring natural gas in the exclusive economic zone so that seeking a strategic partner, especially one with whom Turkey has deteriorated relations, namely Israel and Egypt, should be evaluated in this frame. Yet thinking with the logic of stalemating Turkey by deepening the poor relations with the aforementioned countries will never become anything more than escalating tensions and will never produce a long-term solution in the Eastern Mediterranean.

After the gas exploration, the Cyprus spat is at a new threshold, there will either be a comprehensive solution encompassing Turkish Cyprus, Turkey in any cooperation with Greek Cyprus and other actors or there will be an unforeseen future with a highly risky security environment. Greek Cyprus, once again, should be reminded that Turkey is the most secure and cheapest route for selling discovered natural gas to both Turkish and European markets. Furthermore, possible energy cooperation with Turkey would not only provide the possibility of abandoning the protracted Cyprus issue, but also elevate relations. Greek Cyprus would especially benefit as well from Turkey's project to pump water to Turkish Cyprus in order to diversify economic activities. In this context, Turkey's recent relations on energy issues with the Kurdistan Regional Government (KRG) in Iraq, which had been considered unreliable for several years, would be very good example for Greek Cyprus. Considering all these opportunities together with the economic conditions of Greek Cyprus, it could be interpreted here that escalating tensions between Turkey and Greek Cyprus will be very costly, redundant and will damage Greek Cyprus rather than ensuring maximum benefits to both sides.

Despite all of this, Greek Cyprus seems to be very keen on escalating tensions by relying on conjectural developments that allow it to strengthen its ties with Israel and Egypt. This does not make sense, because given a highly possible reconciliation between Israel and Turkey, Israel, which plays its cards very rationally, would choose the securest, cheapest and most stable route to transfer its natural gas resources. Remembering Israel's apology to Turkey for the Mavi Marmara flotilla incident, it was hinted that one of the reasons behind this apology was Turkey's geographical location and political stability that provide the most secure and stable route. Last but not least, the status quo in the Cyprus issue is not perpetually durable. In particular, a report released by the International Crisis Group discusses pondering new approaches for a resolution, mentioning full EU membership for Turkey. Hence, a comprehensive and wider solution with the incorporation of Turkish Cyprus and Turkey is entailed for benefitting from the benedictions of the Mediterranean. Remarkably, at that time, Greek Cyprus has been suffering from a deep economic crisis, and Turkish Cyprus has been dealing with an internationally imposed embargo and isolation.

It is quite understandable for Turkey to do its utmost so as to protect the interest of Turkish Cyprus in political, economic and cultural terms. Since the very beginning of exploration of natural gas, there were two emerging possibilities: either a comprehensive political solution that would enable all sides to garner the maximum benefit and broader cooperation or escalation of tension for the unforeseen future. In a nutshell, what should be done is the initial one, instead of the latter, which Greek Cyprus has been following recently.