The big picture in Syria is bigger than any one group 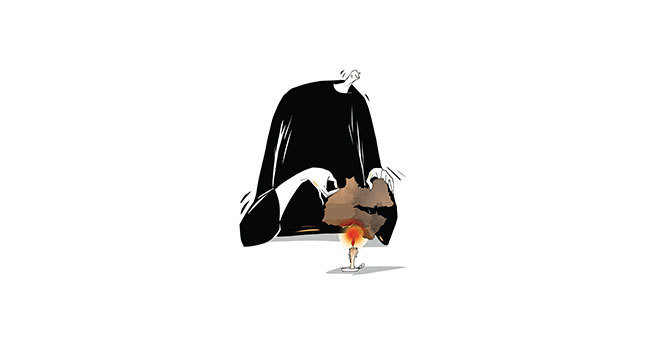 To this day, despotic regimes in the Middle East are greatly benefitting from the support of the West. The demands of the people are suppressed by violence which ends in chaos creating power vacuums that terrorist organizations are eager to fill

The Middle East has been persevering not because the leaders of Middle Eastern countries are just and legitimate, but because the people who live there still have hope for the future and ask for a better one. It would be naive to think that the future is going to be shaped by local dynamics and through democratic means. If that were true, then post-Arab Spring states would not have returned to dictatorships. And democratic Western states would not have tried to legitimize these dictators by cooperating with to fight terrorist organizations. By doing that, the West is actually using terrorist states against a terrorist organization, and in the mean time they get what they want - a destabilized and controllable Middle East.

Backing the leader of the coup and current president of Egypt, Abdel-Fattah el-Sissi, is a clear example of this. Furthermore, the existence of the Bashar Assad regime in Syria is also an indication that Western states decide which dictators, and what kind of "democracy" is to be in Syria. While doing that, their magic weapon is not cutting-edge military technology, but the local groups and organizations that view their local interests as more important than the big picture.

Currently, the international coalition led by the U.S., together with several systematically undemocratic Arab countries, is now apparently fighting the Islamic State of Iraq and al-Sham (ISIS), which is a terrorist organization that emerged out of the destabilized Middle East as a result of post-2003 Iraq that was left unconsolidated and the Assad regime's severe oppression of its own citizens. As Ankara has said, a strategic plan without including the removal of Assad and his Baath party from Syria will not work and will end with no change to the destabilized political and social atmosphere out of which another terrorist organization will probably come.

Western and regional powers, together with their local extensions, are playing a game. The most remarkable facet here is perception management. In the case of the Syrian civil war, it started with Assad's warning that if he were taken out of power, radical Islamists would take over, referring to the considerable amount of religious opposition groups that were in existence far before the emergence of ISIS. This argument actually worked as the international community ceased their previous intention to intervene militarily in Syria against Assad.

Perception management is very determinative of the progression of internal dynamics and continues with the argument that Turkey is overtly and covertly assisting ISIS in order to destroy the Kurdish cantons in northern Syria. It is an undeniable fact that Ankara has helped opposition groups fighting the Assad regime and once ISIS was one of them and might still be taking its share form Turkish humanitarian and arms shipments, but it is not possible that Turkey directly helped ISIS to fight against Assad. If this were so, then why is ISIS also fighting against the Kurdistan Regional Government (KRG) in Northern Iraq with whom Ankara has good relations? Regardless of such discussions of right and wrong, it has to be admitted that it worked and such arguments caused social frustration among Kurds in Turkey and threatened the ongoing reconciliation process.

The game must be quite interesting and fun for those leading it. In this game, the Assad regime is not the primary target, but ISIS, which is fighting against Kurds and Islamist groups, that is at the core of all discussions and decisions. Kurds, especially the Democratic Union Party (PYD) is struggling against ISIS for the sake of preserving its local administration of its three cantons, which were unilaterally declared after it took control of the region through eliminating other Kurdish groups. Their revolutionary success was a result of the withdrawal of Syrian government forces form the region. On the other hand, ISIS also fought against the Nusra Front, Ahrar al-Sham and the Free Syrian Army (FSA) in order to take control of all opposition groups for the sake of the "Islamic State" declared by ISIS.

While Syrian opposition groups are fighting each other and destroying the tiny possibility of mutual understanding and the possibility of living together after fighting together against the Assad regime, regional and international powers are playing another game of internal destruction of the region by the hands of local groups. The secular and revolutionary character of the PYD, which is not representative of all Kurds in Syria, totally refuses the involvement of any Islamist group under the condition that they would not approve of the political status of the three Kurdish cantons. In light of these developments, do you not think that ISIS and the PYD are taking advantage of the situation and are just focusing on their own political interests while the Assad regime is still standing and fuelling the inhuman internal conflict. The preceding statement might be harsh from the Kurdish perspective since they have been oppressed for longer than a century - but what about the Sunni majority and their historical memory of Assad's killings? Therefore, opposition groups leaving ideological obsessions aside and concentrating on their common enemies - ISIS and Assad - seems to be the path to take.

Eventually, Kurds and other opposition groups should have their own natural right to have their own political units. Yet it does not mean that they should sacrifice the future of Syria or the Middle East for their own interests since no international or regional power would actually let them to have safe political units in the present chaotic socio-political conditions unless they first stand together.