A U-turn or when South turns Turkish 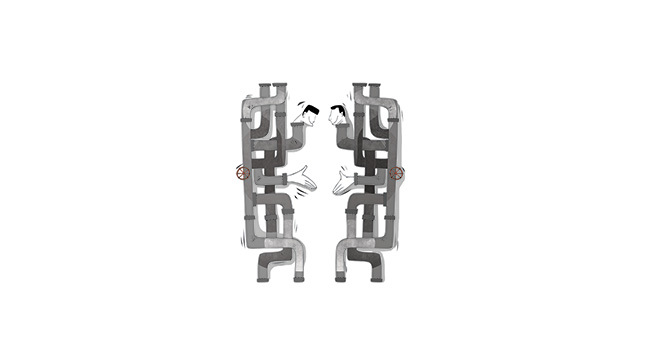 by Maria Beat Dec 15, 2014 12:00 am
Our world is in turmoil, but regardless of which direction its development will take, Turkish-Russian relations have much potential to continue gaining momentum, which was generated by the events in the winter of 2004/2005. The evidence for this includes the breakthrough agreement on a new, state-of-the-art submerged pipeline that will safely transport 63 bcm of natural gas from Russia to Turkey annually by crossing the bottom of the Black Sea. This largely unexpected agreement, made by the presidents of Turkey and Russia in Ankara on Dec. 1, has the potential to turn the whole architecture of the global gas supply market upside down, while also establishing Turkey as a major energy hub for European countries.

If constructed, the Turk Stream pipeline would transport 50 bcm of Russian gas each year to a storage facility on the Turkish-Greek border where it will then flow to consumers in Southern Europe. By closing the conflict prone South Stream project, Russia is no less determined to remain a reliable gas supplier to European markets, though by dramatically changing its alliance with EU countries in favor of Turkey. Opinions differ how much Russia would gain or lose by replacing the long planned connector to Bulgaria with Turk Stream, but experts are agree unanimously about one issue: If the project comes into life, the biggest winner would be Turkey.

A milestone winter for Turkish-Russian relations

The milestone of Turkish-Russian rapprochement was winter 2004/2005 and it was marked by two events: President Vladimir Putin's coming to Turkey in December 2004 and then Prime Minister Recep Tayyip Erdoğan's visit to Russia in January 2005. Not only did those visits boost the expansion of Turkish and Russian cooperation, they laid the groundwork for building mutual respect and understanding between the two countries, which would crucially impact Turkish- Russian relations for the next decade. "Our approach to certain developments may differ, but we clearly share a desire to resolve acute global conflicts and we will definitely continue coordinating our efforts in the pursuit thereof," President Putin said at a press conference in Ankara in December.

Going back to winter 2004/2005, the time to pay those reciprocal visits could not have been chosen better. Having experienced a major leadership change of leadership a few years prior, both Turkey and Russia gained impressive results in terms of economic sustainability and national stability during that winter. That did not happen by chance, and it became an outcome of sweeping transformations initiated by the new political elites in Turkey and Russia.

Summing up the results of the past decade's development, one comes to a conclusion that being goal oriented on different horizons and sometimes cherishing conflicting values, Turkey and Russia share something in common of vital importance for their enjoyed political and economic stability. They both have a strong and charismatic leader at the helm of power who is able to unite the nation around him and propel his country's people to new and earlier unimagined levels of prosperity to prove once again that nations are strongest when their people live well.

Economic Cooperation between Russia and Turkey

Turkish-Russian relations deserve to receive special attention, for in the past decade, they have continued to dynamically develop. Moreover, the trade volume, which stood at around $15 billion 10 years ago, exceeded $30 billion in 2013 and it is predicted that it will go as high as $100 billion by 2023. Nevertheless, imports of Russian gas, which currently reaches $25 billion per year continue to dominate the lion's share of this turnover, while Turkish imports to Russia stand at no more than $5 billion per year. During the past decade, Turkish-Russian energy cooperation has acquired new dimension by expanding to the nuclear sector. Currently, Russia's Rosatom is engaged in the construction of Turkey's first nuclear plant near Mersin by investing more than $20 billion and creating a new sector for the Turkish economy. More than 200 students from Turkey currently study in Russia to master nuclear energy related professions and plans are currently being made to provide similar training opportunities in Turkey.

Russia's construction sector is a highly promising field for Turkish contractors as well whose engagement with the 2014 Winter Olympics in Russia generated more than $3 billion. A professional approach and the high quality of performance of Turkish contractors are well appreciated by Russia as well. "We believe that the experience and know-how of Turkish companies will be well used for the construction of sport infrastructure and facilities for the 2018 FIFA World Cup in Russia," Putin said in Ankara on Dec. 1.

Tourism is another flourishing area of cooperation. Russian tourists have increasingly become a vital source of cash generation for Turkey with more than 4 million Russians traveling to Turkey each year, stripping the long-held title of the country with the most tourists visiting Turkey from Germany. For comparison, the number of visitors from Russia in 2004 hardly reached 1 million people.

Gas as a backbone

Still, Turkish-Russian cooperation rests on natural gas as the backbone. Turkey is an energy dependent country traditionally importing its badly needed oil from its Middle Eastern neighbors and natural gas from Russia. Russian gas deliveries to Turkey started back in the 1970s and have successfully continued since. In 2004, a state-of-the-art Blue Stream pipeline began bringing 16 bcm of natural gas directly to Turkey by crossing the bottom of the Black Sea, also bypassing the tension-prone former-Soviet states. As a result, Turkey became the first consumer who was traditionally fed by European supply networks through Ukraine to start receiving gas safe from potential delays, interruptions and other transit-related problems. The timing of Blue Stream becoming operational was crucial; the fall in 2005 was approaching and the first Russia-Ukraine gas crisis was looming. Since then, Blue Stream has successfully proved itself as a reliable energy supply line for the booming Turkish economy. Furthermore, an agreement was reached this December to expand Blue Stream's deliveries to Turkey by 3 bcm a year starting from January 2015, while reducing the gas price by 6 percent.

Natural gas is vital for the Turkish economy and the country has contributed sufficient effort to diversify its supply sources over the last decade. The South Caucasian pipeline from Baku to Erzurum was commissioned in March 2007 to deliver natural gas from Azerbaijan to Turkey, and its annual capacity is envisaged to reach 25 bcm by 2017. A newly-constructed Trans-Turk Pipeline will be bring 6 bcm of gas annually to Turkey after 2019, when production levels at the mega Shah Deniz-2 gas deposit reaches 16 bcm a year. Additionally, it is projected to transmit another 10 bcm to the Turkish-Greek border on the way to Southern Europe.

Still, the share of Russian gas continues to remain high and accounts for half of all Turkish gas imports, which also gives good reason to believe in solid potential for further demand of Russian gas.

Turkey as the biggest winner

Turkish-Russian relations and cooperation have developed immensely over the past 10 years and were prone to result in a major development sooner or later, though not one that was as astounding as the one that occurred on Dec. 1 in Ankara. Negotiations are still underway and agreements are still being finalized, but some of the agreement's elements are already clear.

If the newly emerging gas pipeline is built in parallel to the Blue Stream pipeline to cross 400 kilometers over the seabed, its submerged part would be substantially shorter than the planned 900 kilometer-long pathway of the now defunct South Stream. In addition, considering the $4 billion already spent on the South Stream's land infrastructure, replacing the long planned connector to Bulgaria with Turk Stream could positively impact the pipeline's overall construction cost for Russia. For European consumers, prices of gas stored in the facility on the Turkish-Greek border would most probably match the price range from the Austrian facility of Baumgartner where the aborted South Stream project was supposed to deliver its gas.
Some experts believe that the inception of the pipeline project has good potential to be grounded better economically, and is thus more sustainable than the South Stream project, which was conceived from the very beginning as a geopolitical venture guided by Russia's strife to curtail Ukraine's capacity to convey Russian gas to Europe.

The experts agree unanimously about one aspect of the project, though; if the project becomes reality, the biggest winner would be Turkey, as it will gain tremendously as a player in the gas market. Although it remains to be seen, if Turkey remains solely a transit country or emerges as a Russian gas seller to European markets as well, it is clear that the country has potential to establish control over gas deliveries to Europe from Russia, Iran, Azerbaijan and possibly Iraq and build a superior position at the regional energy supply market.