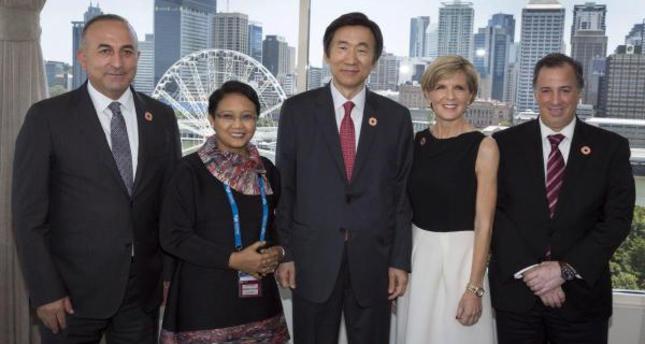 by Pınar Kandemir Dec 21, 2014 12:00 am
In an age of accelerating challenges, could a new type of cross regional, values-based partnership play a constructive role? One year ago, our answer was yes, and the result was the birth of MIKTA – Mexico / Indonesia / Republic of Korea (ROK) / Turkey / Australia. Since then, the importance of strong international collaboration and partnership has been further vindicated, not least during the recent U.N. General Assembly. The world leaders present reaffirmed the importance of strengthening multilateralism as the most effective way to address global challenges. For the challenges facing the world are myriad, ranging from terrorism, the Ebola outbreak to global economic growth.

Yet despite the plethora of problems there is a dearth of solutions. Moreover, the diffusion of power and the emergence of new actors have prompted a crisis in global governance. We are living in a world, in which no single country or durable alliance of countries can sustainably meet the challenges of global leadership. The world is in desperate need of new capabilities, partnerships and more leadership to adequately provide solutions to these challenges.

This yawning gap can be filled by constructive regional powers that are pivotal in their regions, nations with both the will and the ability to play a valuable bridging role between the developing and developed countries. This is the sense of mission that brought the foreign ministers of the five MIKTA nations together. The MIKTA countries share universal values such as democracy and human rights. We have a significant level of economic power, as MIKTA counts among its members the 12th, 14th, 15th, 16th and 17th largest economies in the world. Most of all, we have played an active role at the regional level and are keen to advance the common interests of the international community.

Three things mark MIKTA as a renewed and innovative partnership. First, MIKTA is a cross-regional consultative platform, pursuing interests which are common to all. Second, it is not a superpower-driven partnership. As a flexible and informal initiative, the five members are co-architects that can freely set the agenda in a swift and effective manner. Third, MIKTA draws upon both the common ground and the diversity between the member states. Although like-minded in many respects, we come from different cultures, regions and networks. Indeed, it is this very mélange which enables MIKTA to play the role of a bridge-builder and agenda-setter.

We, the MIKTA Foreign Ministers, following our earlier meetings in Mexico, and on the margins of the U.N. General Assembly in New York, recently met during the G20 Summit in Brisbane, Australia. We made significant progress in shaping the future of the group.

In terms of political momentum, we agreed to hold high-level meetings on a regular basis. In the first half of the year, the Coordinator, currently the ROK, will host the meeting; in the latter half of the year, the meeting will be held on two occasions - on the sidelines of the U.N. General Assembly and of the G20 Summit. The fact that foreign ministers, from countries which are far apart geographically, will meet three times a year is, in itself, a clear demonstration of the strong solidarity between us. Moreover, the five member states have agreed to launch a Senior Officials Meeting and also to create a Cyber Secretariat.

As for its identity, MIKTA has reaffirmed its value as a bona fide enabler in terms of providing global public goods. There is widespread consensus that the two joint statements issued by MIKTA – regarding the North Korean nuclear threat and the shooting down of the Malaysia Airlines flight MH17 – have served to highlight MIKTA's identity as a forum which aims to contribute to strengthening the current legal and institutional architecture. In September, MIKTA adopted another joint statement - on the Ebola crisis and global health, clearly demonstrating a willingness to contribute to issues close to Africa, a region of high importance to all MIKTA countries.

As for MIKTA's own deliverables, we will seek to identify areas for cooperation in which we can create added value. Post-2015 development cooperation; global health; and disaster risk management and humanitarian assistance may be possible areas for cooperation to explore.
As MIKTA demonstrates its utility and versatility as a new model for cross-regional and values-based partnership, it will serve as a bridgehead for fostering various forms of cooperation. The member states stand ready to write a new chapter in international consultation and cooperation, seeking to deepen the partnership within MIKTA and strengthen their bilateral relations.