The Presidency of Religious Affairs: Administrative or spiritual institution? 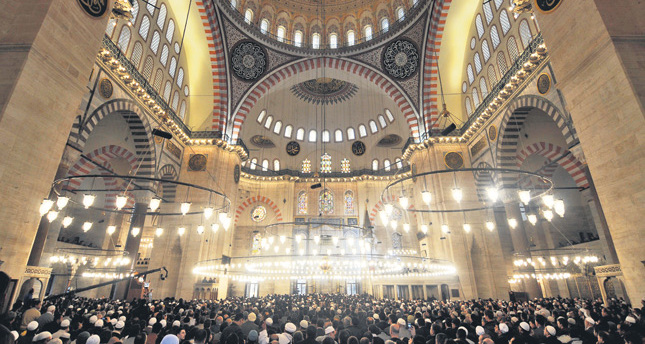 by Erkut Ayvazoğlu Dec 24, 2014 12:00 am
The Presidency of Religious Affairs (DİB) is an important institution in contemporary Turkey. Unfortunately, the institution, which has been under the legal control of the Prime Ministry since its establishment, got its fair share of a smear campaign in the recent days and weeks. It was claimed and supported by the opposition and its media outlets that the head of the DİB, Mehmet Görmez, ordered the purchase of a super Mercedes car to be used for official purposes and the payment was made by the Foundation of Religious Affairs of Turkey. Later, as it is generally known in Turkish media, the details once again came out subsequent to the DİB's official press statement. By using such a smear campaign against one of the Turkish Republic's oldest institutions, it is obvious that the current government is aimed to be set under pressure. Similarly, other issues of great importance such as the Alevi issue is generally addressed in the context of the current DİB and consequently, the only responsible address. Of course, the super Mercedes issue can be elaborated on by considering the Islamic ideal of "modesty" as a value that the DİB should particularly follow. However, it should also be taken into account that the DİB is ultimately an official state institution whose 2015 budget is even, e.g., 1.4 times bigger than that of the Interior Ministry, 2.7 times bigger than that of the Foreign Ministry and 5.1 times bigger than that of the National Intelligence Organization (MİT). Thus, Turkey has to decide whether the DİB is an administrative or a spiritual institution representing its Muslim citizens. By answering this system-based question, the notion regarding DİB officials will change as well.

However, despite these usual politically motivated campaigns, particularly against the current government, the DİB should be addressed in depth and in a more comprehensive way, with this occasion.

Before stressing some historical and political facts about the DİB, a couple of weeks ago, KONDA Research and Consultancy published an interesting survey that was carried out throughout Turkey on behalf of the Helsinki Citizens Assembly concerning the "The Presidency of Religious Affairs: Perceptions, Satisfaction and Expectations." The survey was carried out fac-to-face on Oct. 11-12, 2014 with a sample of 2,627 people in 32 Turkish provinces including the provincial centers, and 150 neighborhoods in 112 districts. Based on the survey's findings, it seems that the general notion regarding the DİB is positive, however, there are huge gaps between the perceptions of different social groups. For instance, while 77 percent of the population described the DİB from a rather positive point of view as an official organization that has the duty to provide Islamic services based on faith, worship and moral principles, 23 percent of the population describes the DİB as an institution that the Turkish state had established to strictly control and direct religious life in Turkey.

Various other topics of great importance are addressed in the KONDA survey such as the "qualification of DİB services and the people's satisfaction, the DİB and women, the DİB and Alevis, trusting the DİB, the DİB and human rights, the DİB's neutrality or discrimination, the DİB's position regarding daily politics or the DİB and the controversial issue of secularism." It should be remembered that in the past, the Union Party went to the Constitutional Court in 1971 arguing that the status of the DİB is not in compliance with secularism, but the Court eventually decided that the DİB was in compliance with the secular understanding of the Constitution. The KONDA survey also stated that regarding the DİB's share from the 2014 state budget, which went beyond the amount allocated to the Interior Ministry and Health Ministry, 37 percent of the people were comfortable with it and 42 percent described it as wrong.

Eventually, the survey can be analyzed in depth, but as implied above, the DİB's roots have to be taken into account before elaborating on its current status, notion, necessity, uselessness and difficulties.

Subsequent to the establishment of the Turkish Republic and the abolition of the Ottoman Empire, it was not the subsequently founded Leadership of Religious Affairs (Diyanet İşleri Reisliği), which in a certain sense replaced the Ottoman Caliphate in 1924. In other words, the DİB was not a substitute for the Caliphate. As a part of the major institutional step in the secularization process by the government, Law No. 431 was passed in Parliament (Hilâfetin İlgası ve Hanedan-ı Osmanî'nin Türkiye Cumhuriyeti ve Memalikî Haricine Çıkarılmasına Dair Kanun) in order to abolish the Caliphate on March 3, 1924. In addition, the same law abolished the function of the Sheikh al-Islam, who governed the religious affairs of Muslims, and the Ministries of Religious Affairs (Şer'iye Vekaleti) and Pious Foundations. The main fundamental point in this context, however, is generally disregarded. As it is stated in Law No. 431, which concerns the abolition of the Caliphate, the Ottoman Caliphate - around since 1517 - was abolished in 1924 because "its meaning and concept is inherent to the Turkish government and to the Turkish Republic." (Orig. Law No. 431/1: "Halife haledilmiştir. Hilâfet Hükûmet ve Cumhuriyet mâna ve mefhumunda esasen mündemiç olduğundan Hilâfet makamı mülgadır.") Thus, based on Law No. 431, interesting questions arise as to whether the Caliphate's power was actually transferred to the Turkish Grand National Assembly (TBMM), i.e., Turkish Parliament. If yes, then how? If not, how should Law No. 431 be read and interpreted? Can it be said that despite a legal basis this issue has actually not been perceived and put into practice by both the Turkish, and predominantly Muslim, people and politicians until now? How should Law No. 431 be dealt with, particularly in the context of the DİB?

In the context of the Kemalist secularization process regarding the Republic - and other revolutions from the top - the Caliphate's abolition was aimed to facilitate this process. However, the lack of a sufficient program made it also quite difficult for subsequent governments to provide religious services through the newly established DİB whose main aim was both to control and provide a certain version of the Sunni interpretation of Islam to fill the Caliphate's power vacuum. A fundamental issue that certain Alevi groups disregard by currently supporting orthodox Kemalist ideas is that Kemalist ideology actually created this institution. Today, in addition to the historical and current claim that the status of the DİB is not in compliance with the secular understanding of the Constitution, problems such as the non-representation of non-Sunni Muslim groups are main issues that the DİB, the Turkish Republic and, above all, its citizens are currently facing.

How the DİB's organizational structure had to be and what kind of tasks it had possessed, unfortunately, were not determined clearly enough after its establishment. Besides the DİB's authority to monitor and, eventually, "to control" all cases concerning the Islamic faith, which is related to beliefs and rituals of worship, the main duties were described as "administration of all mosques as well as the appointment and dismissal of all imams (preachers), khatibs (orators), waizs (preachers), sheikhs (leaders of dervish lodges), muadhdhins (callers to prayer) and all other employees of a religious character such as the supervision of the muftis generally." Unfortunately, the education of such imams, preachers and muadhdhins by the Turkish state has been fundamentally lacking. Thus, it is broadly accepted that the remnants of the Ottoman imams and muftis were used but their numbers were decreasing by the day. Consequently, the institution had serious problems coping with the mentioned difficulties and the citizens' needs because of the lack of a concrete secular understanding of the regime and of its own role and responsibilities to provide religious services. Professor Cemil Koçak's book "Tek-Parti Döneminde Muhalif Sesler" (Oppositional Voices during the Single-Party Era) is a good example for an examination of the difficulties the DİB faced during the early phases of the Republic.

Nevertheless, the newly founded DİB stood, and even stands today, officially for all Muslims in Turkey with the task of providing religious services to all its citizens without discrimination. But, as is already known, it is one of the main controversial issues to define "all Muslims" as a homogenous group. Throughout the years, the DİB transformed itself in contrast to its early version in favor of the Muslim population's religious needs. However, Turkey still has to solve this problem in the near future by elaborating the DİB's status and its entrenched Kemalist founding idea. Is the DİB an administrative or a spiritual institution? To use the DİB as a means to indirectly attack the government does not promise a serious oppositional success either. The problem, if there is one, has to be solved in a more comprehensive, historically reconciled and convincing way.