The West’s dream of ‘enlightened democracy’ in the Middle East 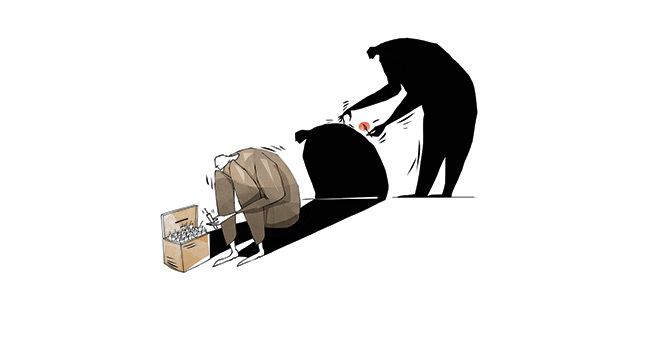 Upon looking at the tragedies that have taken place and are ongoing in the Middle East, the West has always prioritized its own self-interests and exploited warfare politics rather than side with the people in their demands for democracy

Recently, the human rights watchdog Freedom House published a report on the state of democracy in Turkey. The introduction to the report began: "Turkey's democracy is in crisis," and continues throughout the report with the accusation that Turkey - more specifically its Justice and Development Party (AK Party) government - is turning into an authoritarian state. It accuses the government of its inability to cut ties with the country's illiberal past. Furthermore, in the recommendations section it says: "This government's increasing authoritarianism cannot be ignored or denied any longer. The United States urgently needs a policy that fits the reality of current events in Turkey," as part of policy recommendation for the U.S. administration relationship with Turkey. Ultimately, it suggests that Turkey become a more democratic state and that both the EU and U.S. administrations need to formulate policies to help Turkey, one of their most important allies in the region, on its path to democratization, as if a democratic Turkey for the Turkish people is their priority and most important concern. The analysis of this report, and more broadly, the Western rhetoric against democracy in Turkey and on democratization of the Middle East, can be presented clearly, if one analyzes the cases of Egypt, Syria and the West's relationship with Gulf monarchies.

First, it is important to highlight two moments in providing an analysis for the Arab Spring. The first moment of the Arab Spring happened because the crisis of dictatorships and artificial borders built after the collapse of the Ottoman Empire manifested through a regional uprising. The people in the region showed their determined stance asking for democracy by giving up their lives. The second moment was the fact that these popular uprisings and their desire for democracy, although initially supported, ultimately were not backed by the West, the so-called defender of democracy and human rights around the world.

Democracy, in its "enlightened" form, which is one that guarantees a constitutional and representative government, was the desire of many people in these "nondemocratic" Arab states, and people saw it as the best option for their century-long struggles against their regimes. This is where the dilemma would begin: What kind of democracy was to be "installed" or "chosen" when the dictators are gone? Whose democracy was to be supported by the West?

The Western form of democracy was proven to be a failure when it was "installed" in a state by external forces as was proven in the cases of Iraq and Afghanistan. More importantly, the Western notion of democracy does not take into consideration - or at least there has not been a case where it did, with the exception of Turkey - the "Eastern" nature and character of the Middle Eastern way of life. This is not in any way cultural relativism, however, the purposes of government systems are best constructed and understood by those who are governed, thus, their uniform top-down implementation, in most cases, has the risk of leading to failure.

Turkey, as the only secular, democratic regime in the region with a Muslim majority and a dominant Islamic culture - although it has its limits - had gained tremendous experience in combining the sensitivities of the region, i.e., Islam, with the "enlightened" and secular version of Western democracy. Partly, this success has been due to Turkey's historically close relationship with the West since the early stages of the Ottoman Empire. After all, democracy in Turkey came in stages as it has survived a few military coups and attempted coups in its not-so-distant history.

More importantly, the last decade or so had become a moment when Turkish democracy unleashed its motivation for human rights and freedoms that had been neglected for decades. In addition, its stable democratic politics in the past decade or so had led to a flourishing economy that in return made modern Turkey a regional role model and an international player. This success did not happen as a historical coincident, but rather the profound changes in social, cultural and intellectual realms accompanied by political and economic stability since the early 2000s offered a successful democracy to Turkey today.

Furthermore, the Turkish model is, precisely, a prescription for what Western "supporters of democracy" have always been opposed to - a radicalized political Islam. Thus, the de facto Turkish model of democracy presented itself as the working model, which denounces radical Islam for extreme political motivations and the Middle Eastern "nature and character" cultural aspects and power relations with Western values. Such a political prescription is the most suitable for Middle Eastern countries if stable democracy is desired, rather than the radicalization of political groups whatever their motivations might be.

Turkish democracy, as a model for countries where the masses were successful in overthrowing their dictators, stood out most strikingly after the success in Tahrir Square in the Egyptian Revolution, which led to democratic elections and the victory of Mohammed Morsi as the elected president. It created a positive atmosphere for those who had longed for democracy in Egypt for decades under the dictatorship of Hosni Mubarak, and those who wished for the toning down of the radicalization of political Islam.

Egypt was an optimistic attempt to implement the enlightened version of Western democracy. In the end, was it not the aim of the West to bring democracy and end the dictatorships in the region? However, Morsi's victory was ended and Egypt's democratically elected government was suspended by a military coup by a coalition led by Gen. Abdel-Fattah el-Sissi. More strikingly, the coup also received a warm welcome from leaders of democracies around the world. In other words, the West's motivation for a "democratic Middle East" once again exposed its "selective" method for where it needed democracy and where an undemocratic regime would better serve its interests. It does not seem that the instability in Egypt will be settling down in the near future. So then in Egypt, will the instability be serving the interests of the West or a stability governed by a dictatorship?

Another example where the West failed to support the masses' hopes for democracy post-Arab Spring is, sadly, Syria. The voice of those who asked for a democratic Syria has been shut by President Bashar Assad's forces' bloody massacres of hundreds of thousands of people. This was not a coincidental civil war in Syria. Those who had gathered under the umbrella of moderate opposition and requested a democratic Syria were, although initially supported by Western rhetoric, left alone to drown in the bloodshed by Assad and other terrorist groups that emerged from the conflict. The Syrian human tragedy has taken a more complex form with the rise of extremist groups and its spillover to the neighboring "failed state" of Iraq with the emerge of the terrorist group Islamic State in Iraq and al-Sham (ISIS).

But why did the Syrian opposition not receive support from the West when they had hope for democracy - what the West has always wanted for Syria?

Finally, if one was to make an attempt to understand the double standards put forward with Western rhetoric on democracy, peaking over the West's relations with Gulf monarchies, can easily make the picture very clear. The oil-rich Gulf monarchies such as Qatar, Bahrain and Saudi Arabia are best known for their archaic stance against human rights and individual freedoms. In a country such as Saudi Arabia where women are not allowed to drive, do people not need democracy? I mean, even if a full democratic regime is not brought in and monarchy remained, do people not deserve to enjoy very basic freedoms and rights as individuals? As the protector of democracy and being "responsible for its installation," does it not concern the U.S. or EU that women have close to no rights in these countries? The elite in Gulf monarchies enjoy their never ending oil dollars while migrant worker tragedies never end in the shelters built outside the cities of Dubai.

These and other tragedies untold in this paper are not secrets to anyone. However, for some "unknown" reason the human rights watchdogs such as Freedom House have yet to call for the EU or U.S. to form policies that would shape their relationships with figures such as Assad, Sissi, or the heads of Gulf monarchies to end tragedies in the region or bring democracy to their countries. Thus, rather than offering harsh and biased criticism of Turkish democracy, one must be fair and give it credit as it offers a great solution to the crisis directly or indirectly caused by the imperialist agenda in the Middle East, which has been affecting the lives of millions in the region.