The implications of being a Muslim student in Britain 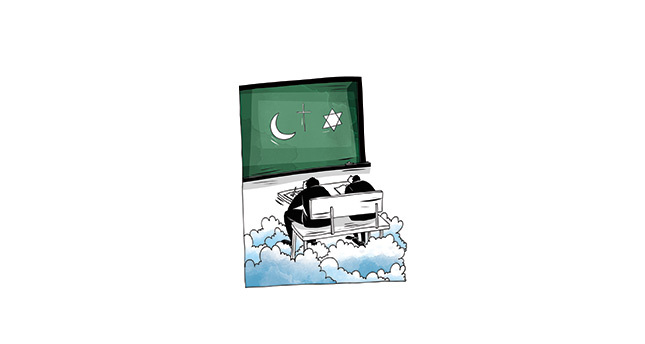 It is hard to understand why religion courses in Turkey have always been a subject of heated discussion. In Britain, courses specifically focusing on Christian theology as well as others, are compulsory since religious education is considered essential

With the current discussions in Turkey on the inclusion of religious education from the first year of schooling onward, there has been a new wave of debates as to the direction in which Turkey is heading. The decision made by the Education Ministry to include the religious culture and moral knowledge subject has been an interesting observation for the Turkish diaspora community in particular.

Let me begin with a bold statement: This was a decision made one era too late. I say this because growing up as the daughter of a Turkish family in one of the least diverse areas of London, who completed her education in British schools, receiving religious education as a compulsory lesson from reception class - a compulsory class prior to first year - onward without even having the option to refuse, has added a lot to me as a person.

Being a Muslim student attending these lessons led by a reverend, from secondary school onward, has certainly added to me more than it has taken away. This was not a case of whether having compulsory religious education classes was associated with backwardness, ignorance or even modernity. It is just the way things are. While I completed my compulsory education in a religious Church of England school, there are many profound and top-of-the-list Catholic schools that offered the best and most disciplined education across the U.K. - schools that I, as a student, wanted to attend, but due to the nature of migrant families, was hesitant to be sent to. Considering the mentality of the education system, it might be said that attending religious education classes was as important as attending science, math and English literature classes. It was as important as reading Roald Dahl and learning about Newton's theory of gravity.

Our daily routine consisted of attending assembly between 9:00 a.m. and 9:20 a.m. singing hymns about the beauty of God's creation, the rivers of Babylon and unity among humanity regardless of race and faith. During our lunches we would make supplications to thank the one and only. To add to that, during our compulsory religious education classes, once a week we would make a supplication from the teachings of Jesus and commence our learning into one of the three Abrahamic religions as well as other religions from around the world such as Hinduism and nonreligious philosophies such as Humanism, however it must be noted that between 30 percent to 50 percent of our classes focused on Christianity. All students, regardless of their faith, took part in these supplications, but rather than bringing my hands together, I would place them in front of my face and supplicate in accordance with Islamic teachings. This was not a problem at all. For students who chose not to take part, they would sit in silence at their desk and wait for us to finish. These lessons taught us to have respect for one another.

In no apparent way have these lessons made me more ignorant, backward minded or led me to walk the streets of London with a blindfold. Instead it taught me to have values, to understand the values of others and to respect each and every living thing around me. Every time a religious event drew closer, particularly in relation to the three Abrahamic religions, we would put on plays, talking about the events in biblical texts, such as Noah's flood, the struggle of Moses and the life of Mary. It was normal. Yes, Catholic schools have been subjected to exclusion and discrimination in the same manner the imam-hatip schools are being showcased today in Turkey. But the reality is that these schools show better performance and discipline due to their nature of working toward perfection in every field, holding tight to their values and not losing their way in showing toleration and understanding of the differences around them. Personally, attending these lessons made me appreciate the differences around me and prepared me well for the future in such a diverse world. It made me realize and enjoy diversity and the ocean of knowledge out there.

When I was young, there was not much of an option in terms of religious schools given that I was growing up in a less diverse area called Harrow. Now, we have schools of multiple faiths, alongside Catholic and Church of England schools, there are now Muslim religious schools. What makes these new religious schools different is that instead of singing hymns every morning, there will be a special break when the call to prayer is performed.

Having a diversity of religious schools allowed the British society to celebrate its diversity and success in respect of people toward one another. The opening of other religious schools meant that minority rights where being granted. Moreover, attending a Muslim school did not mean that other faiths were not mentioned, as discussed previously, religious education lessons are compulsory and it has added great value toward the learning programs of students. I guess it becomes a question of why not.

The only difference between schools belonging to the Church of England and Catholic schools is the standard limitations toward uniforms and the frequency of religious education lessons conducted with the inclusion of religious culture lessons and bible study groups. In neither of the two types of schools, the length of one's skirt cannot be above the knee by a set measurement, in most cases, on or below the knee is required, this adds to professionalism, and it worked.

Adding to this, the major difference between Church of England and Catholic schools is that the sexes are segregated. Nevertheless, this is the norm in religious schools in the U.K. and has been so for centuries. In addition to this, regardless of the school one attends, every school fulfills the demands of its other faiths. Almost every school with Muslim students has created space for students to perform daily prayers through the provision of a multi-faith room, designated Islamic society room for prayer or a silent room where students can go to perform worship. This was also repeated for Christians, Jews and Sikhs if required.

In the U.K., compulsory religious education lessons in religious schools have now been extended from 14 years of age to 16, with great emphasis on the importance of these lessons, they are now recognized with an "important general certificate of secondary education" by the Ministry of Education in the U.K. The current trend in thought among some people across Europe is the fear that the loss of religious values has led to the loss of values in general as well as a rise in racial and discriminatory attacks toward its non-European or religious members of society. I have witnessed this at university as displeasing comments have been easier to demonstrate, and religious people have, in many cases, found it difficult to express themselves. This is why I would fully support the inclusion of religious education lessons in primary education onward, as learning about my own religion, as well as other religions, benefitted me as a student immensely.

The basis of the opposition toward the introduction of religious culture lessons in Turkey is the country's historical secularist nature. But living in the times we are today, and still insisting on not having these lessons in place, or the provision of such basic and fundamental human rights whilst praising the European education system and pouring thousands into their economy to get a glimpse into this system, is not feasible if we as a country not want the same success for ourselves. My proposal for the people having difficulty accepting the introduction of such lessons to treat it like a field trip, treat it like knowledge, and treat it as the revitalization of a lost culture - of Turkish history, of the history of the region.

Even more so, the introduction of such lessons mean that a new field of academia is on its way - the expansion of knowledge and career paths are a rising possibility, with space for specialist research to take place in fields such as anthropology, sociology, phycology, medicine, the arts and so forth. The introduction of religious culture and morality lessons will instigate new areas of research that the state has previously feared to tackle. As enthusiastic as I may be in support of such lessons, it is important that we understand the need for it and the reasons for the introduction of such a scheme.

* Former seminar teacher at the Centre of Democracy and leader of the Youth Branch for the Union of European Turkish Democrats
Last Update: Dec 31, 2014 2:16 am
RELATED TOPICS