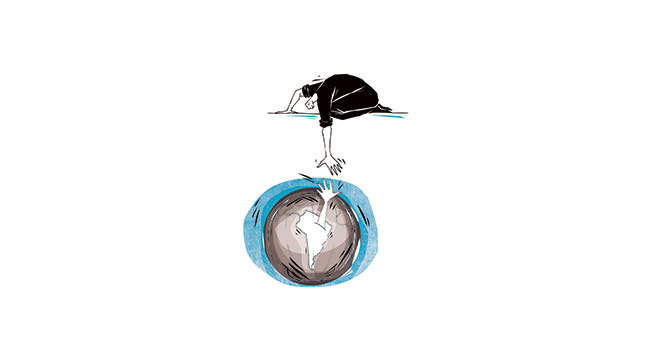 by Erman Akıllı Jan 06, 2015 12:00 am
It is well known that Turkey has expanded its soft power through international aid, which was about $3.4 billion in 2012. It is quite likely more than that now. Regarding a specific case, in September 2014, a memorandum of understanding was signed between the Turkish Cooperation and Coordination Agency (TİKA), and the Mexican Agency for International Development (AMEXCID) on close cooperation in terms of regional and international aid projects. In other words, from now on, both Turkey and Mexico can expand their foreign and humanitarian aid using each other's experiences. AMEXCID General Director Juan Manuel Valle Perena mentioned that through TİKA's experiences in Africa and Central Asia, AMEXCID wants to enlarge its projects in those regions. TİKA also signed a memorandum of understanding with the Presidential Agency for International Cooperation (APC-Colombia) in 2013, which would serve as a basis for establishing cooperation and enhancing relations in tourism, social and economic infrastructure, science and technology, energy, productivity and competitiveness, agriculture and social support projects. Providing such aid in Latin America and the Caribbean is of significant importance to Turkey. Contrary to limited regional visions which characterized the Cold War era, such international aid programs and projects indicate the implementation of an international vision.

As both doctrinaire and practitioner of the "Strategic Depth," Prime Minister Ahmet Davutoğlu's insights have also widened the horizon of Turkish foreign policy. Considering its status as a peripheral state during the Cold War era, Turkey now has the vision of one of the central states of the international system regarding foreign policy actions in the global arena. This success in foreign policy is boosted by TİKA, one of the executive tools of Turkey's foreign policy in different regions and continents around the globe.

In this way, foreign aid and humanitarian diplomacy are becoming key tools in states' foreign policy agenda. Thus, TİKA constitutes a unique institution for Turkey in this manner. It is clear that TİKA's uniqueness and pivotal role in foreign policy has been bestowed via the "Strategic Depth" doctrine.

Before reviewing TİKA's operations in Latin America and the Caribbean, it is essential to consider its roots, which go back to the early 1990s. After the dissolution of the Soviet Union, the international system had to shift and reshape its structure due to the new world order that rose from the ashes of the bi-polar world system. During this process, Turkey had to revise its foreign policy according to new opportunities appearing on the periphery. This process gained momentum due to the newly-emerged Turkic republics following the dissolution of the Soviet Union. As a result, Turkey sought out partnership opportunities based on mutual Turkic origin.

As mentioned before, prior to the 1990s, Turkey had very limited interaction with the surrounding region and its people. Many authors mentioned this type of low-profile relationship status as "consent to resignation" from the region, due to Turkey's dominant state ideology of at that period, called a "Western" state ideology, from a Kemalist understanding of foreign and domestic policies. According to Western state ideology, Turkey's sole foreign policy recipient must be the "Western" world alone. In other words, regions such as Central Asia, the Middle East, Far East, Latin America and the Caribbean had been intentionally ignored. However, the turning point in policy which has led to the current, active soft power, involved foreign policy, including TİKA, changing the appearance of Turkish policy, and transforming it into an efficient actor in various regions, not only in Turkic states.

Regarding Latin America and the Caribbean, Turkey's approach is apparent in two distinctive approaches. First, developing bilateral relations in all possible fields such as social interaction, trade, the economy, education and culture, and second, establishing institutional cooperation with regional organizations such as AMEXCID, the Organization of American States (OAS), Association of Caribbean States (ACS), the Southern Common Market (Mercosur) and the Caribbean Community (CARICOM). Furthermore, Turkey has signed over 200 agreements with the countries of the region, in order to establish a legal basis for bilateral relations, covering almost every field of cooperation. TİKA has an executive role for Turkey for establishing and crowning these relations with regional partners. In doing so, TİKA has been implementing various development projects and providing technical support in many fields to the countries in the region.

As the continuation of TİKA's success in the region, Turkey has an ever-expanding "helping hand" reaching toward Latin America and the Caribbean in both development and humanitarian aid. Some of the aid is humanitarian support to Central American and Caribbean countries after they were hit by several hurricanes, and lately, to Haiti and Chile following the devastation caused by major earthquakes. Besides aid in kind, Turkey has contributed $1 million to Haiti and pledged to undertake a project with a budget of an additional $1 million. The Turkish government donated $500,000 to Chile after it was hit by a devastating earthquake. In addition to the previously donated $2 million, the government provided an additional $1 million at the Haiti Donors' Conference. Many Turkish civil society organizations also contributed to the aid efforts in different ways. Furthermore, in order to support the healthcare capacity in Belize, TİKA provided six intensive care beds, one regular bed, five mechanical ventilation units, seven invasive monitors, one defibrillator, two nebulizers, two pulse oximeters and one EKG device. Additionally, providing aid through TİKA in education, Turkey established the Turkish history and culture department at Havana University, Cuba; provided substructure aid for schools in Mexico City, and provided substructure aid for schools in the provinces of Salta and Buenos Aires, Argentina. These projects are just the tip of the iceberg of TİKA's activity around the region.

It was mentioned at the beginning that from Turkey's perspective, developing a specific foreign policy aimed towards Latin America and the Caribbean is significant. Unfortunately, Turkey was forced to be one-dimensional in its foreign policy for more than 70 years, and being one-dimensional in foreign policy and having only one focus caused Turkey to be acknowledged as a peripheral state. For sure, this acknowledgement took place during the Cold War era. However, until the Justice and Development Party (AK Party) came to power, it was impossible to claim that Turkey had generated either new focuses or dimensions in its foreign policy. The bi-polar world system is buried under the ruins of the Soviet Union, and in a multi-polar world order, a state cannot be bound to a single region. Thanks to the "Strategic Depth" doctrine, Davutoğlu's multi-dimensional foreign policy and TİKA's projects ongoing in more than 120 countries from the Pacific to Central Asia and everywhere in between, Turkey now has many different foreign policy destinations around the globe.

* Chief of staff at CESRAN International and Assistant Professor in the Department of International Relations at Ahi Evran University
Last Update: Jan 06, 2015 2:11 am
RELATED TOPICS