PEGIDA and the rise of fascism in Germany 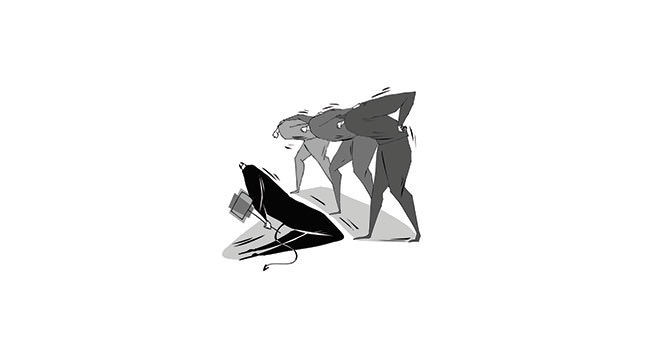 by Hilal Barın Jan 08, 2015 12:00 am
The protests held every Monday in the German city of Dresden, a hotbed of far-right activities and a neo-Nazi stronghold, with xenophobic and Islamophobic discourses, have drawn growing numbers of people. We are faced with a new movement that manifests itself through rallies with anti-Islam banners and chants in this city, which has seen anti-Islam sentiment on the rise in recent years. Growing participation in rallies held by the Patriotic Europeans Against the Islamization of the Occident (PEGIDA), confronts us with a new phenomenon that should be analyzed by social scientists. PEGIDA's rallies in the square in front of the Semperoper opera house in Dresden drew 500 people on Oct. 27, 1,000 people on Nov. 3, 1,700 people on Nov. 10, 3,000 people on Nov. 17, 5,500 on Nov. 24, 7,500 on Dec. 1, 10,000 on Dec. 8, 15,000 on Dec. 15 and 17,500 people on Dec. 22. Some of the banners carried by marchers had slogans such as: "We miss our country" and "Stop immigrants abusing our social welfare system." It is seen that PEGIDA's anti-Islamic and anti-immigration stance has spread across the nation. As rallies attract growing numbers of people, politicians as well as more than 5 million immigrants living in the country are becoming anxious.

PEGIDA is an anti-Islam movement that started with 300 people in Dresden, where immigrants account for just 2.5 percent of the population and Muslims numbering only 0.1 percent. In other words, the statistically insignificant number of Muslim immigrants in the city pales in comparison to those in other German cities. The movement asserts that it is "not against Islam, but against the Islamization of Europe," "not against immigrants coming from war-torn countries, but against economic migrants." PEGIDA picks out patriotic European Muslims and Islam as scapegoats for various political and social problems and legitimizes the rising xenophobia and discrimination against refugees.

PEGIDA is made up of a broad mix of far-right radicals, hooligans and desperate and excluded citizens. The 41-year-old leader of PEGIDA, Lutz Bachmann, has a criminal record for burglary, assault and a conviction for drug possession. Bachmann insists that he cannot be deemed a "racist," saying one of the witnesses at his wedding was Turkish. He says that they fight for the fatherland, which has been under the rule of Germans for centuries and that people take to the streets for this purpose.

There are also claims that Bachmann has worked for the German secret service. Bachmann plans to expand PEGIDA, which started in Dresden, to 14 more centers. In many German cities similar movements have begun with names formed by combining the first two letters of the city with the rest of the acronym - Legida in Leipzig, Bogida in Bonn and Dügida in Düsseldorf. It is feared that similar rallies may emerge in different European countries as well. PEGIDA members say that they are against preachers of hate and religious or political radicalism regardless of religious affiliation and that is why they march against parallel societies formed by immigrant communities that do not integrate with local communities by keeping their cultural norms. They see it as part of their right to maintain and protect Western Judeo-Christian culture.

Although PEGIDA is a movement that embodies the rising xenophobia and neo-Nazism in Germany, it neither sees itself as neo-Nazi nor uses neo-Nazi symbols or discourses. Differently from neo-Nazis, they capitalize on a victimization narrative and accuse Muslims of taking away their culture and their jobs. They are against "radical Islamists," and demand a toughening of asylum and immigration laws. While they say they are not against Muslims but radical Islamists, they complain about the rights granted to refugees and asylum seekers. They demand the suspension of immigration into Germany and Europe. It can be said that PEGIDA has some aspects that may be associated with fascism, but it is too early to say with any certainty that it is moving in that direction. We can regard this movement as the resurgence of existing fascism, rather than the birth of a new fascism, because inactive racist movements may accelerate over time and naturally turn into fascism. For example, fascist tendencies in Germany have been interpreted for years as a desire to establish a nationalist and organic society that is interwoven with cultural ties. The term "das Volk" (the people, masses), which was used by the Nazis, suggests a racial union and a collective mission. During PEGIDA rallies, the concepts of "the people and fatherland" have come to the fore once again.

A demonstrator who takes part in a PEGIDA rally said: "Muslims raided a cafe in Sydney and we do not want a similar attack to happen here in Germany." Another demonstrator claimed that immigrants come to Germany to take social benefits and exploit the state. A different protester said: "I have no problem with foreigners," and added, "but if we accept 100,000 Muslims into the country, 1,000 of them will turn into radical Islamists and see us as the enemy." Saying that immigrants cannot integrate into German society, some demonstrators point to the Christian Social Union in Bavaria's (CSU) call for immigrants "to speak German even at home." While it is claimed that the root cause of such demands is the recently increasing attacks by the Islamic State of Iraq and al-Sham (ISIS) in most cases, a state of paranoia about the Islamization of the West as suggested by the very name of PEGIDA itself, characterizes the views of participants. In fact, as Chancellor Angela Merkel has already confessed, multicultural policies in Germany have "utterly failed." Consequently, immigrants in general, and Muslims in particular, are used as scapegoats for the economic crisis, while policies are based on this understanding.

Muslims who have been living in Germany for three generations are regarded as a threat with respect to participation in political and public life, visibility and in economic and political terms. According to a Pew report published in January 2009 titled "Mapping the Global Muslim Population: A Report on the Size and Distribution of the World's Muslim Population," Muslims in Germany constitute the largest minority group with a population of 4,026,000, accounting for 5 percent of an overall population of 82 million. A Pew survey shows that one-third of Germans have a negative opinion of Muslims, and this is a higher rate than in France and Britain. Around 29 percent of Germans think that immigrants create a burden on the country by taking jobs and social benefits.

According to the political scientist Hajo Funke, "If we associate the PEGIDA movement with fascism we will close all the doors of dialogue and lose sight of the factors underlying the movement." Funke suggests that expressing opinions in a constructive way and keeping the channels of dialogue open, instead of adopting a harsh and bitter tone in the face of events could provide a solution. PEGIDA supporters claim that neo-Nazis have not participated in marches against immigrants and the spread of Islam. However, it is said that among those shouting the chant, "We are the people," are a lot of far-right extremists and neo-Nazis.

Meanwhile, anti-Islam movements have also become common among political parties. Mainstream political parties fail to fight Islamophobia of the German Freedom Party, whose chairman defended Dutch politician Geert Wilders when he compared the Quran to Hitler's "Mein Kampf," and the Pro Germany Citizens' Movement, which is thought to be linked with attacks on mosques in Berlin, Hanau and Hannover. We can say that those who are not happy with the current economic, social and political conditions surrounding the state target Islam and Muslims. Political parties cannot offer a remedy for this discontent.

PEGIDA holds that the National Democratic Party of Germany (NDP), which is usually described as a neo-Nazi organization and the far-right conservative Alternative for Germany Party (AFD) joined the protests, since they felt threatened. Alexander Hausler, an expert on far-right extremism in Düsseldorf, thinks that this new nationalism attracts people who could not adapt to the changes that have taken place over the last decade and who have lost hope and have begun to sympathize with far-right parties. Just as the Nazi regime made Jews the scapegoat for various crises and problems during the 1930s and '40s, today Muslims are perceived as the source of problems and society is mobilized through propaganda about the danger of Islamization.

Until now, PEGIDA has organized protests without resorting to violence against individuals. Since the movement is made of diverse groups, however, it is not possible to ensure that attacks on places of worship will not target individuals or groups in the future. PEGIDA marches are thought to be a factor behind the recent increase in attacks on mosques and immigrants. Although PEGIDA supporters say they are "not against immigrants or Islam, but extremists," participation of far-right extremists and neo-Nazis in demonstrations sparks a strong reaction. And systematic attacks on mosques by neo-Nazis continue. Most recently, the Turkish-Islamic Union's Süleymaniye Mosque in Dormagen city was attacked last week. The perpetrators painted swastikas and wrote racist insults on mosque walls, such as "Down with Islam," "Long live Hitler, long live the NSU" - the National Socialist Underground is a far-right German terrorist group responsible for a series of murders of Turks, also known as the döner murders) - and, "You will be sent to concentration camps."

German politicians are concerned about recent developments and PEGIDA marches draw criticism from the government as well. German President Joachim Gauck criticized PEGIDA in his Christmas message while not directly mentioning it, urging citizens "to not heed the calls of those wanting to seal Germany off." Chancellor Merkel condemned the demonstrations and said: "There is no place here for incitement and lies about people who come to us from other countries." German Justice Minister Heiko Maas described PEGIDA as "a disgrace for Germany." Again, many politicians derided PEGIDA members as "pin-striped Nazis." The opposition Left Party (Die Linke) has blamed Merkel's government for the increasing racist and xenophobic demonstrations in recent weeks. It says that the policies and discourses adopted by the government for years have paved the way for today's problems. The chairman of the Social Democratic Party of Germany (SPD) parliamentary group, Thomas Oppermann, warned that "[PEGIDA supporters] are not patriots, but dangerous nationalist forces." The Green Youth spokesman Eric Marquardt described PEGIDA as "clearly racist, xenophobic and anti-Islam," saying "it should not be shown understanding under any circumstances."

Churches, political parties and artists have called on people not to join PEGIDA's demonstrations. While PEGIDA marches continue, thousands of people have repeatedly gathered for counter-rallies to protest PEGIDA. The largest counter-rallies took place in Munich, Bonn and Dresden. According to police sources, the counter-rally in Munich drew 12,000 people. Munich Mayor Dieter Reiter told the crowd, "This demonstration shows tonight Munich at its best: here are thousands of people together to combat racism and exclusion." In Bonn, 2,500 people protested against PEGIDA at a rally organized by churches, trade unions and artists. The movement called RefugeeWelcome.de held a counter-demonstration in Dresden's Schlossplatz Square in order to disrupt a PEGIDA rally. Around 4,000 people attended the demonstration, which was also supported by the Nazi-free Dresden alliance. In the end, politicians, political parties, the government and civil society should maintain a well-organized stance against these anti-Islam marches in order to achieve a result.