Charlie Hebdo, death and double standards in the West 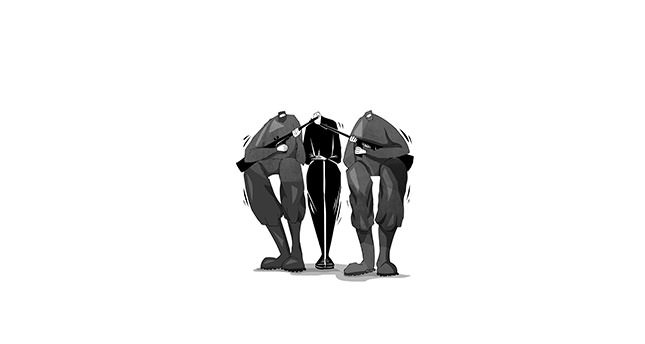 The Charlie Hebdo attack sparked protests worldwide. Majority of the discussions on this issue focused on radicalism and Islamic identity, while ignoring both the past misdeeds of the West and greater tragedies happening in the rest of the world

Given the international outpouring of solidarity following the brutal murder of 12 people at the Parisian satirical magazine Charlie Hedbo, I can only assume that we will see similar outrage the next time a Western or Israeli bomb/drone kills 12 innocents in Pakistan, Afghanistan, Iraq, Syria, Yemen, Libya and/or Palestine... right?

Let me be frank: These attacks are unequivocally horrific, and if we take the attackers motivations at face value - the offence caused by several crass depictions of the Prophet Mohammad - then these appear petty and infantile at best. The childhood phrase "Sticks and stones may break my bones, but words [and images] will never hurt me" springs to mind.

Nevertheless, such attacks on the figure of Prophet Muhammad are nothing new, and they are designed to denigrate, disparage and offend. Historically, the prophet has been recast as Mahound, the Prince of Darkness, and labeled as the Anti-Christ in the Western world. Dante's "Inferno" positioned the prophet in the 8th Circle of Hell. No less than Voltaire - yes, the Voltaire, whose apocryphal saying "I disapprove of what you say, but I will defend to the death your right to say it," has been so frequently paraphrased following the Paris massacre - in his play, "Fanaticism or the Prophet Mohammed," depicted the prophet as a murderous and blood-soaked despot. If anyone can claim Voltaire's apocryphal maxim then it is the slain police officer, Ahmed, who died defending a magazine that ridiculed his faith.

Rewind back to the Danish cartoon controversy of 2005-2006 that included one of the prophet hiding a bomb in his turban, and we see a similar phenomenon. In 2012, a film made in the U.S. depicted the prophet as a child molester and Islam as a cancer. Both of these instances led to widespread violence. As the French say, plus ça change... According to Montgomery Watt, "Of all the world's great men, none has been so much maligned as Muhammad."

Should Charlie Hebdo have the right to publish material that may offend? Of course - no one should die for expressing an opinion. Whether or not it is a good idea given the sensitive socio-political situation in France and the world in general, however, is another question.

But where does this religious sensitivity that compels murder come from? If a person is firm in their belief, then surely this could never be challenged by the ignorant scribblings of an unbeliever? At worst, one would think that the response would be one of smug self-assurance basking in the fact that said unbeliever is assuredly going to Hell. A more charitable reaction, however, might be pity. All of us who are less than pious have an annoying relative or friend praying for our heathen souls, despite our Homer Simpson-esque objections of "Please don't. You might be praying to the wrong god and making them angry."

Blaming such attacks solely on the idea of "radical Islam," however, is too simplistic. Ideology is one thing, but ideology cannot be divorced from its social and political contexts. France has a problem with integrating young men of North African descent. Widespread rioting in 2005 and 2014 are testament to this. Moreover, if these men made their transition from weed-smoking, hip-hop listening, petty criminals to transnational jihadists because of Western actions in Afghanistan, Iraq, Libya and the ongoing conflict in Syria then this needs to be acknowledged. Radicalization, in short, does not occur in a vacuum.

Have we really come full circle once more to the self-righteous days after Sept. 11 in which political leaders trumpeted that radical Muslims hate our freedoms? Is it not possible that perhaps some of this anger comes from imperialist foreign policy and exploitative capitalism that has been packaged under the rhetoric of freedom, civilization and democracy? This is not to excuse the murderous actions of such attacks, but the social and political aspects of Western policies, both at home and abroad, need to be factored in when investigating what drives such atrocities.

It has been difficult recently not to notice the double standards that the West has in regards to the value of human life. Following the Sydney siege entailing the death of two innocents and the mentally unstable gunman, far more attention was given to these deaths than the 130 Pakistani children murdered by the Taliban that occurred in the days after. This is the understanding within Australia itself, of course, given that it is a local story, but the airplay that it received around the rest of the world was nothing short of astounding.

Similarly, the aftermath of the Paris massacres has entailed a rolling coverage featuring live crosses to Paris and interviews with experts for days on end, whereas on the same day 37 were killed by a suicide bombing in Yemen, and yet that has received only a fraction of the attention. This is not to mention the fact that Boko Haram may have massacred up to 2,000 in Nigeria as the Parisian saga unfolded. Again, this is natural in France, but the rest of the world's sometimes touching proclamation that "nous sommes Charlie" is an appeal to a fictitious Western meta-culture, self-assured of its own superiority that allegedly champions freedom of expression.

Never mind that it is highly unlikely that a magazine like Charlie Hedbo would be allowed to publish its works in the vast majority of countries around the world, including putative bastions of freedom such as the United States and Australia. France is relatively open in regards to its freedom of the press, but then again isn't this the same France that denies freedom of expression to Muslim women who wish to wear a niqab?

These appeals to putative meta-cultures whether "Western," "Islamic" or other are dangerous because all too often these labels lead to proclamations of a "clash of civilizations." These labels black-box cultures and highlight the supposed differences between cultures rather than focusing on the overwhelming similarities that we share with our fellow human beings. As the late Edward Said pointed out, these labels want, "to make 'civilizations' and 'identities' into what they are not, shut down, sealed off entities that have been purged of the myriad currents and counter-currents that animate human history and that over the centuries have made it possible for that history to contain not only wars of religion and imperial conquest but also exchange, cross-fertilization, and sharing."

There is also a double standard in regards to who and what are allowed to be ridiculed as well. In Australia last year, a mild lampooning of Israelis who had set-up chairs as an open-air theater to watch the bombs falling on Gaza unleashed a storm of criticism pertaining to anti-Semitism, yet a cartoon in which a Hamas militant is depicted telling a small child grasping a teddy bear to "Go win the propaganda war for daddy" was deemed kosher.

This abhorrence toward anti-Semitism, of course, is a result of the Holocaust, but how many Muslims have to die at the hands of Western states and their proxies, be it through bombs or sanctions, to elicit even a modicum of similar sensitivity?

George Orwell once wrote, "Actions are held to be good or bad, not on their own merits, but according to who does them." Because what's worse: 12 innocents murdered for allegedly insulting the Prophet Muhammad or 13 civilians, including children, murdered by an Israeli bomb indifferent to their lives after it collapses an overcrowded apartment block? What's worse: being beheaded by an ISIS militant or slowly bleeding to death courtesy of a U.S. daisy-cutter dropped from a remote controlled drone? To build upon Orwell, we can probably take it a bit further and say that it doesn't matter how many die but who dies and where. Until we recognize the sanctity of all human life, and not just in terms who and the manner in which one is killed, then the cycle of radicalization, retaliation and revenge will continue unabated.

An acquaintance of mine living less than two minutes from the Charlie Hebdo office told me on Friday how terrifying the ordeal was, yet rightly acknowledged the insupportable lives of the many people around the world who contend with the threat of politicized violence every day. Indeed, it has been reported that children in parts of Pakistan are afraid of the sun; it is during sunny days that visibility is high and thus drones and death from the sky are more frequent. Imagine being afraid of the sun! The provider of life on this planet as we know it! Ditto for violence in Iraq, Syria, Yemen, Libya or Gaza.

But does it really have to be this way? To begin with, let's not dispose of freedom of expression, but rather let's ditch the confrontational civilizational meta-labels and focus on our common humanity. Everyone has the right to sympathy, security and life whether they are an irreverent French cartoonist or a Pakistani child.

* Dr Tristan Dunning is an honorary research fellow at the School of Historical and Philosophical Inquiry at the University of Queensland in Australia and publisher of Hamas, Jihad and Popular Legitimacy: Reinterpreting Resistance in Palestine​
Last Update: Jan 12, 2015 10:36 am
RELATED TOPICS